Let’s talk about stupid. According to Rep. Jamie Raskin, several  people called Nancy Pelosi’s office on January 7, 2021 to ask about things they had lost while they were rioting.

Rioters were calling “asking whether there was a lost and found because they forgot their phone there, or they left their purse or what have you,” Rep. Jamie Raskin, D-Md., told Insider on Friday in a Q&A.

“The officers quickly got on the phone and said, yeah, just give us your name, your address, your social, you know, and we’ll tie up those loose ends,” Raskin said.

Derp on steroids. But what this tells us is that these people hadn’t yet realized they had done something wrong. Rep. Raskin, a constitutional scholar, observed that many insurrectionists had no concept of the separation of powers and didn’t understand that a president has no constitutional authority to invite people to break into the Capitol and interfere with Congress. They seemed to think if they were doing what the President asked, then it was okay. And I suspect he is right.

Righties fetishize the Constitution the way they fetishize the Bible. Invoking either the Constitution, or the Bible, is simply to claim authority for their position, whatever it is, even if there is no connection between their position or either document. These documents have a mystical power that confers special privilege and authority on conservative white people, you see.

Another constitutional scholar wrote a couple of years ago that the alt-right has created an alt-constitution.

The Alt-constitution – in sharp distinction from the real Constitution – tolerates no restrictions on speech, guns or private property, does not concede that federal laws trump state and local law – although the supremacy clause of Article 6 of the Constitution clearly indicates otherwise – and incorporates the principle of separate but equal.

For the far right, the meaning of every provision in the Constitution is plain or discerned easily by appealing to what the Founders intended. Or failing that, to Holy Scripture.

Of course, they have no idea what the Founders intended, as they also have developed an alt-history that bears no resemblance to what really happened at the Constitututional Convention. And they don’t know Holy Scripture any better. Often the two documents weirdly merge in their minds, as when they decide the Second Amendment protects a “God-given right” to carry any firearm they want to carry, without restriction. That’s a position that’s indefensible either by “original intention” or in the Bible, which was written before the invention of firearms.

Here’s some more derp. Someone in the Virginia legislature, trying to head off the evil Marxist influence of Critical Race Theory in public schools, proposed a bill that listed what parts of American history children ought to know. These include, the bill said, the famous debate between Abraham Lincoln and Frederick Douglass. Which, of course, never happened. Lincoln debated Stephen Douglas, who was a nationally known big shot in his day and who had a big impact on U.S. history. Alas, Stephen, we hardly know ye now.

There is a knee-jerk assumption — and I’ve run into self-identified Democrats who hold it also — that American history as it has been taught in American schools, from elementary school through undergraduate Ameerican History 101, is simply the accurate and unbiased version of history, and to introduce any part of Critical Race Theory would be to introduce politics and dogma to history, instead of simply teaching history.

But the fact is, history as it is taught to American’s school children is nothing but the bastard offspring of a whole lot of politics and dogmas going back to the beginning of the nation. The Thanksgiving Story we all learned and drew crayon pictures of way back when is mostly just a myth, for example.

Another example is Reconstruction. When I was a public school student of the 1950s and 1960s, we were taught the Gone With the Wind revisionist version of Reconstruction, in which a vengeful North sent evil carpetbaggers to the South to oppress the poor plantation owners. Absolute garbage. But now it appears Reconstruction is not being taught at all.

In social studies standards for 45 out of 50 states and the District of Columbia, discussion of Reconstruction is “partial” or “non-existent,” according to historians who reviewed how the period is discussed in K-12 social studies standards for public schools nationwide. In a report produced by the education nonprofit Zinn Education Project, the study’s authors say they are concerned that American children will grow up to be uninformed about a critical period of history that helps explain why full racial equality remains unfulfilled today.

If you aren’t a history nerd and don’t know much about Reconstruction, you probably can’t appreciate what a shocking mess that period devolved into, and how much a lot of it is relevant to what’s going on today. I’m sure the biggest reason it isn’t taught is that white racists can’t bear to hear about it.

The Civil War also isn’t taught well at all, which has allowed many generations of white children to be able to blissfully deny that the war was about slavery. As I wrote in another post in 2020,

The Lost Cause is, of course, a mythology that grew in the South after the Civil War. And at the hands of generations of Southern historical scholars, the mythology supplanted the real history of the war, as well as the real history of slavery, Reconstruction, Jim Crow, and a lot of other things. The Lost Cause denied that the primary — and secondary, and tertiary — reason so many slave states seceded and formed the Confederacy was to protect the institution of slavery. Instead, the myth insisted, the Civil War was fought to preserve some noble, agrarian way of life that was principled and free. Seriously. And this way of life was ripped away from the poor victimized South by those dirty northern industrialists for some vague reason that never made coherent sense. And if you know anything at all about the real history, you know what a pile of excréments de taureau that is.

It’s only been over the past 40 years or so that new scholarship has challenged the Lost Cause myth and corrected the record. So if today you are an American history major or take graduate level classes in American history, you probably get well documented facts that paint a very different picture than most of us were taught. But I don’t know this has trickled down to what freshmen learn in American History 101. The article on Reconstruction teaching says, “In interviews, teachers said they had barely learned about the period themselves and would need more professional development to feel comfortable teaching it in-depth.”

Reconstruction probably can’t be taught without pissing off a lot of the parents, who are likely to show up at School Board meetings while exercising their God-given right to carry firearms. For that reason, I don’t blame schools for wanting to skip it. But if you don’t know Reconstruction, or why the institution of slavery forced the nation into civil war, or the truth about the Jim Crow period, then you don’t know American history. Not really.

Another way that politics and dogma colors what’s taught in schools is through the textbooks. Textbook publishers are great big companies that are in the business to sell books. That doesn’t make them bad. But it also means they tend to create products that their market — especially the state textbook adoption committees — will buy.

A big chunk of my so-called career was in the textbook industry. Over several years I worked for a now-eliminated company called Silver Burdett, then Prentice Hall, then Simon & Schuster. Once separate companies, the education departments of those three companies all merged and are now called Pearson Education. I also worked for Scholastic and McGraw Hill. Most of that time I did production management, which means I wasn’t doing writing and editng but pulling all the pieces of the books together and getting them typeset, printed, and bound. But it gave me a great front-row seat on how textbooks happen, and how the publishers are very, very careful to create textbooks that won’t be too “conroversial” to sell. A lot of self-censorship goes on.

Some states have textbook adoption committees, which is usually a panel of people appointed by the governor who review textbooks and decide which ones may be used in that state. If a textbook is not adopted, the publisher loses the entire public school market in that state. And if it’s a big state, like Texas or California, that gives the textbook adoption committees a lot of power about what goes in textbooks. I got my first textbook job in the 1980s, and this was a long-running issue then already.

The Texas textbook adoption committee is especially notorious. I’ve written about this before. See:

Textbook publishers do produce state-specific editions, although for cost reasons the differences are minor and, back in my day, accommodated by a black plate change during the press run.

El-hi (elementary through high school) books are heavily illustrated — in color! — and much of the cost in producing them is in what’s called pre-press, or getting ready to print. Although technology is always changing, I believe big print runs of many tens or of thousands of books at a time are still done using four-color process, which means printing with four plates — cyan, magenta, yellow, black. If you’re only changing a little bit of text here and there, you can change black plates as needed, but the color illustrations have to remain where they are. Changing all the plates for each state edition would drive the cost up more than you can imagine. So that puts limits on what the publisher can do, editorially. If Texas demands specific language that absolutely will not sell in California that can be accommodated, but only if it’s just a few sentences here and there.

Bottom line, the textbooks end up tip-toeing around any topic that might piss off anybody — especially race and evolution, but not limited to that — which means the textbook adoption committess really do dictate what is taught in all the states.

And the moral is, American history as it has been taught since before any of us were born is a sorry-ass thing incrusted by many layers of politics and dogma and bullshit. So now we’ve got school boards and parents, most of whom don’t know American history from a toaster, up in arms about Critical Race Theory, which isn’t even a thing that would be “taught” outside of graduate schools. And they’re using that as an excuse to push even harder against real history. What they really want to do is indoctrinate children with even more alt-right mythology and propaganda than the kids are learning already. And I bet the kids still won’t learn about separation of powers, either. 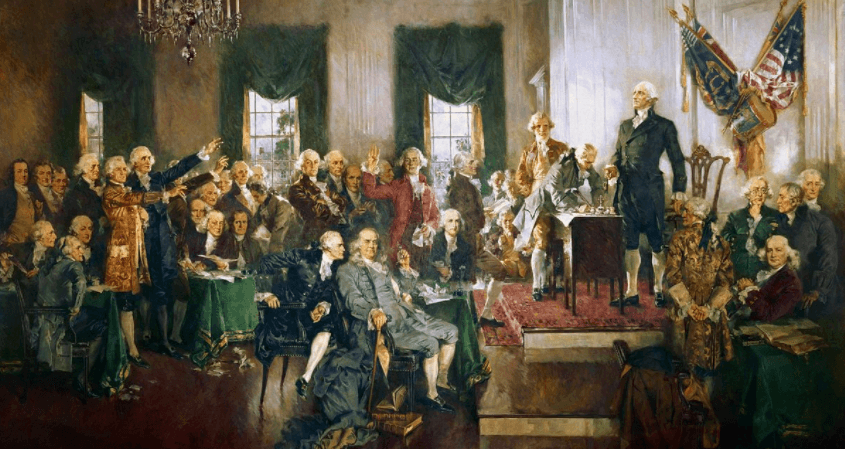