First, a couple of updates to the last post. It isn’t official yet, but the New York Times and the Associated Press have called the Democratic primary for Pennsylvania House district 12 for Summer Lee. Lee is a progressive, and the Democratic establishment and AIPAC threw a ton of money at the race in support of her chief rival, Steve Irwin, a lawyer and former head of the Pennsylvania Securities Commission. I understand it’s a blue district, so there’s a good chance Summer Lee will be the first Black woman to represent Pennsylvania in Congress. Congratulations, Summer Lee!

There’s something odd going on with the vote count for the Oregon House district 5 Democratic primary. This is the one between the progressive Jamie McLeod-Skinner and the fossil fuel toady incumbent, Kurt Schrader, also known as the “Joe Manchin of the House.” McLeod-Skinner is ahead. But there is one county that so far is not reporting votes for either the Republican or Democratic primary. This is Jefferson County, which appears to be more rural and conservative that most of the rest of the district. The Jefferson County elections page has vote tallies for county offices but none for the House district. As I said, this seems odd. Currently McLeod-Skinner is 9,668 votes ahead of Schrader, and I don’t think there are enough votes in Jefferson County to flip the lead to Schrader, but there are still uncounted votes in some other counties in the district. One of those is Clackamas, which appears to have given Schrader’s people access to the vote counting before they were supposed to, There’s also an issue with blurry ballots. Even so, some election observers in Oregon think it’s very unlikely that Schrader is going to erase his vote deficit now. Fingers crossed.

May 24 primaries are in Alabama, Arkansas, and Georgia, and there are runoff elections in Texas. I understand that in Texas there’s an automatic runoff if no candidates passes the 50 percent threshold. There are a lot of runoff elections. The primaries were March 1.

In Texas, I am primarily interested in the House district 28 race between Democrats Cisneros and Cuellar. Henry Cuellar is the incumbent, and he has the backing of Nancy Pelosi and the Dem establishment. But Cuellar wants to criminalize abortion. He was the only House Democrat to vote against the Women’s Health Protection Act, a law codifying Roe v. Wade protections. Jessica Cisneros is pro-reproduction rights and has the endorsement of Pramila Jayapal. She also has raised three times more money than Cuellar.

Another Texas race that I’m watching is for the Republican nomination for state attorney general. The incumbent is Ken Paxton, whom I have written about before. You might remember the stunt he pulled in December 2020 when he a filed suit contesting election results in Georgia, Wisconsin, Michigan, and Pennsylvania. And that’s not all. Tim Murphy writes for Mother Jones,

Paxton is swimming in the sort of scandals that typically end political careers. He has been under indictment for securities fraud since his first year in office, and he was the subject of a formal whistleblower complaint from a number of high-ranking former staffers who accused him of using his office to do favors for a real estate mogul who had hired a woman with whom Paxton had allegedly been having a lengthy affair. His lawsuit to throw out the electoral votes of four Biden-won states was so outlandish that it triggered an ethics investigation by the State Bar of Texas. The FBI has reportedly been circling. Paxton lost major donors and faced a primary challenge from a number of notable conservatives—Bush; Eva Guzman, a former justice of the state supreme court; and Rep. Louie Gohmert, of whom the less said the better.

But despite all that, Paxton has continued to wield real power in state politics, in ways that have rippled out to the rest of the country. His office defended the Texas law that effectively circumvented Roe v. Wade. It led the legal fight to restore the Trump administration’s “Remain in Mexico” policy. It’s fought climate-change standards. And most recently, his office drafted a legal opinion stating that gender-affirming care should be investigated as child abuse.

In other words, he’s the perfect Republican. His opponent is George P. Bush, Son of Jeb and commissioner of the Texas General Land Office, which I understand mostly negotiates mineral rights on state lands. George P. is the one and only pro-Trump Bush, according to many news sources. It’s possible that, if elected, he wouldn’t be much of an improvement over Ken Paxton, but I doubt he could be worse. Paxton got a lot more votes than George P. in the primary, however. There’s a lot of commentary out there right now calling this election possibly the end of the Bush dynasty.

And oh, my, Georgia. Georgia is also a runoff state, so Tuesday’s primaries might not settle things. So we may not yet find out if Herschel Walker will be running against Raphael Warnock in the general. But Walker is way ahead in the polls. Warnock does have a primary opponent named Tamara Johnson-Shealey, but no one seems to be polling the Democratic primary. Surely Warnock will win.

The polls all say that Brian Kemp will win easily over Trump’s boy David Purdue in the governor context. Stacey Abrams is running unopposed on the Dem side.

You all remember Brad Raffensperger, I’m sure. The Georgia secretary of state is in a tight contest with with a full-blown MAGA creature named Jody Hice. This will be a test of how much sway the Big Lie still has over Georgia voters.

Trump has endorsed Purdue, Walker, and Hice, as well as Burt Jones for lieutenant governor; Patrick Witt for insurance commissioner; John Gordon for attorney general; and Vernon Jones for the 10th Congressional District, and I hear he’s put a substantial amount of his own money into electing these people. So on Tuesday we’ll see how they do.

In Alabama, Tuesday may be the last hurrah of Mo Brooks, incumbent U.S. Representative for the 5th district. Trump got pissed and un-endorsed him, and now another candidate named Katie Britt is slightly ahead of him in the polls. All I know about Britt is that she’s an abortion criminalizer who hasn’t pissed off Trump, yet.

Sarah Huckabee Sanders is running for governor of Arkansas and is way ahead of the pack in the one and only poll I could find. Damn, Arkansas, what did you do to deserve this? Republican Senator John Boozman is running for re-election and probably will wn his primary easily. 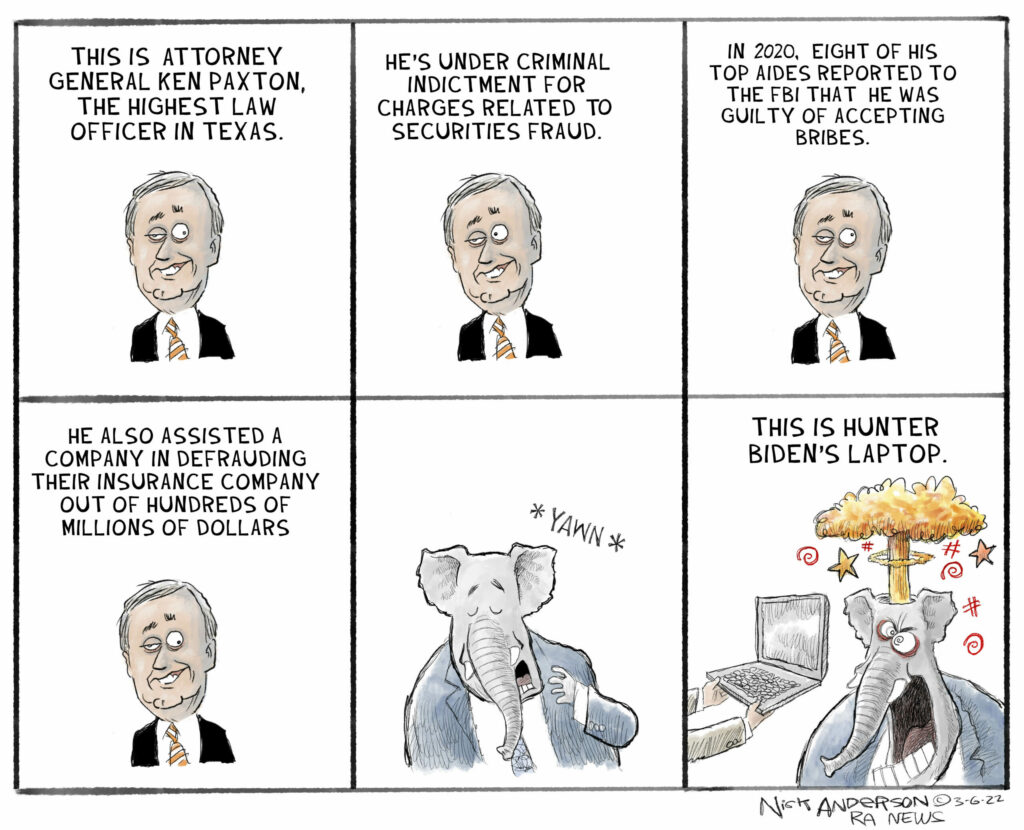