Lawrence O’Donnell had a really good discussion about the DoJ’s motion of yesterday asking Judge “Loose” Cannon to rethink her robustly ridiculed decision. Worth watching.

Queen Elizabeth’s passing is eating regular news coverage so there is not as much commentary on the motion as there might normally have been.

Regarding the judge’s Labor Day decision, I do like this line from Lawfare Blog: “Cannon’s opinion actually defies defense. It is an epic mess, one that manages to do violence to a remarkable number of distinct areas of law in an admirable economy of only 24 pages.”

So they really are concerned about what might have been in the empty folders.

The judge gave Team Trump a deadline of Monday morning to respond to the motion for a partial stay, though on his Twitter-like platform, the former president didn’t feel the need to wait nearly that long.

In a pair of unhinged missives, the Republican condemned the appeal, celebrated the judge he nominated to the bench, peddled familiar lies about the FBI “spying” on his campaign, pointed to “record setting corruption” that does not exist in reality, and generally threw an online tantrum that seemed to reflect deep anxiety.

But just as notably, Trump once again added that federal law enforcement officials “plant fake evidence” — a bizarre claim that the former president embraced, then abandoned, and then re-embraced.

I guess Trump missed this meme, which has been all over social media for several days: 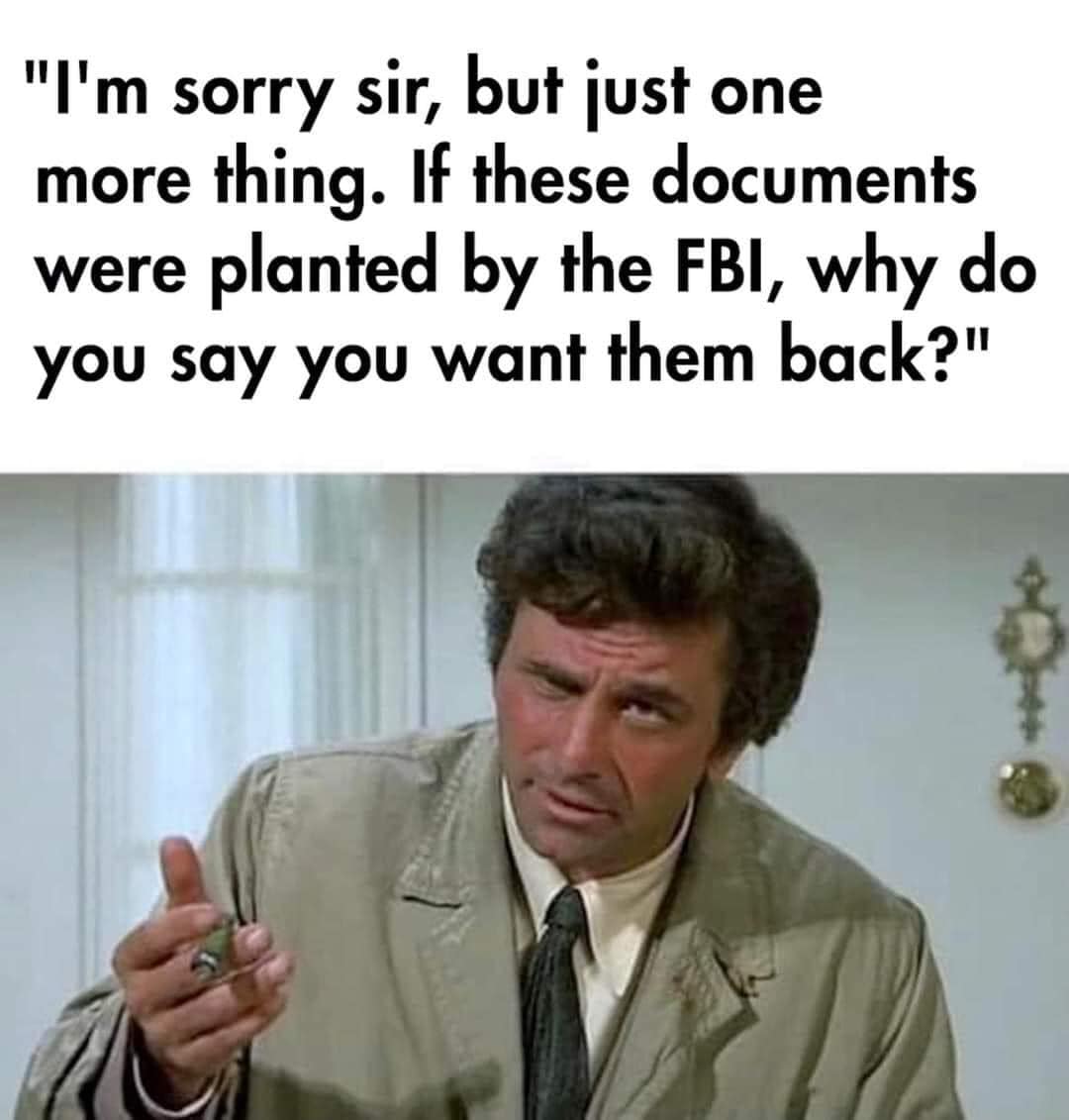 Trump was handed a defeat by another Florida judge today. This is Josh Kovensky at TPM:

A South Florida federal judge (not that one) on Friday dismissed a complaint filed earlier this year from President Trump in which he accused everyone who had offended him during his political career of wrongdoing.

U.S. District Judge Donald Middlebrooks for the Southern District of Florida found that Trump and his attorneys might be eligible for judicial sanctions as a punishment for filing the lawsuit, which he described as “inadequate in nearly every respect.”

Trump sued in March 2022, alleging in civil court what he could never coax, cajole, or coerce the Justice Department to do: claim that the Trump-Russia investigation was the product of an elaborate conspiracy with Hillary Clinton, the DNC, and various other malefactors at the top.

“At its core, the problem with Plaintiff’s Amended Complaint is that Plaintiff is not attempting to seek redress for any legal harm,” Judge Middlebrooks wrote. “Instead, he is seeking to flaunt a two hundred-page political manifesto outlining his grievances against those that have opposed him, and this Court is not the appropriate forum.”

Throughout the ruling, the judge laces his writing with seeming annoyance at having been presented with the complaint in the first place.

See also Azi Paybarah at WaPo: “What the Amended Complaint lacks in substance and legal support it seeks to substitute with length, hyperbole, and the settling of scores and grievances,” Middlebrooks wrote.

This week Trump threatened more, and similar, lawsuits against Fox News (for running a Lincoln Project ad) and CNN. Judges needs to start slapping big sanctions on these suits.