Regarding Trump’s appeal to Clarence Thomas to get the 11th Circuit out of his documents case — this can go either way, IMO. In a sane world Trump’s request wouldn’t have a chance, so we may see how corrupted Clarence Thomas truly is.

First, this is what Trump wrote on his social media platform yesterday:

“NARA lost a whole hard drive full of HIGHLY SENSITIVE information from the Clinton White House — more than 100,000 Social Security numbers and addresses, Secret Service and White House operating procedures (EXTREMELY SENSITIVE!), political records, and who knows what else. They left the hard drive in an unsecured location, and didn’t realize it was gone for months — some say the data could have filled millions of books, and NARA admitted the material was ‘personally identifiable,’ impacting thousands of White House staffers, visitors, and even one of Al Gore’s daughters. NARA actually had to offer a large ($50,000!) reward to try and get the information back. What else have they ‘lost’? How can Americans trust a system like this? There is no security at NARA. I want my documents back!”

In other words, he’s saying that because NARA lost an external hard drive with personal information (but not national security secrets) on it thirteen years ago, Trump can demand to get “his” documents back. Government documents are still not “his” documents.

Here’s some information on Trump’s arguments to Clarence Thomas at SCOTUSblog:

Trump contended that the court of appeals lacked the power to put Cannon’s order on hold because the Biden administration had not specifically appealed that order and because, in any event, it was not the kind of order that can be immediately appealed.

Even if the court of appeals did have the power to review Cannon’s order, Trump added, it should have allowed her ruling to stand. Alleging that Trump “had sole discretion to classify” documents generated during his presidency, he argued that Cannon properly referred the issue to a special master “to determine whether documents bearing classification markings are in fact classified.”

As I recall, Judge Dearie determined that unless anyone could prove otherwise, all documents marked classified are in fact classified. Trump’s recollections of what he might have done, or wish he had done, do not count.

In fact, in the very next paragraph, Trump admits that Cannon’s order is worse to that in Al Odah a DC Circuit case decided per curiam by a panel including Merrick Garland. Fawzi Khalid Abdullah Fahad Al Odah was a plaintiff in a habeas petition — as an enemy combatant he hadn’t and never was charged with a crime — but he was challenging indefinite detention with inadequate due process. By comparison, Trump has not been charged and if and when he is charged, his lawyers will get to see the classified evidence against him. For now, he’s just a plaintiff and the record is uncontested that the warrant executed on his beach resort involved no gross abuse of his rights.

Without acknowledging that the claim Cannon only ordered DOJ to share with Dearie is false, Trump makes the argument that DOJ should have to share with Trump’s designees under the Presidential Records Act. As DOJ has already noted, of course, that’s only true of the records are where they are supposed to be: In the possession of the Archives. They’re not, and that’s part of the problem.

Another part of the problem is that, elsewhere in this appeal, Trump unquestioningly invokes EO 13526, which governed classified information for the entirety of his term and still does. As I’ve noted, that explicitly says even former Presidents must get waivers of Need to Know requirements to access classified information. Trump never changed that order before he became a former President.

In the next paragraph, Trump then complains that DOJ might complain about sharing all of this information with Dearie (and Trump’s lawyers) but might decide to share some of the information with witnesses. Again, elsewhere in this appeal, Trump unquestioningly invokes Navy v. Egan, which is the Supreme Court precedent that says the President — not the former President — gets to decide who needs access to classified information or not.

And nowhere in this argument do Trump’s lawyers admit something that DOJ laid out explicitly before the 11th Circuit: At least one of them, Evan Corcoran, is a witness or possibly even a co-conspirator (DOJ referred to his lawyers, plural, as potential witnesses, suggesting Lindsey Halligan (who was at Mar-a-Lago during the search) or Jim Trusty has had a role in the obstruction process as well. Of course, Trump also neglects to mention the obstruction part of the investigation, which makes all documents with classification marks proof that Trump defied a subpoena.

In other words, Trump is even more poorly situated than Al Odah, who at least had lawyers uninvolved in his potential security concerns. The only one of Trump’s lawyers who’s definitely not a witness, Kise, is also the one who recently was a registered agent of Venezuela.

As I keep saying in this matter, no one really knows how any of this will turn out. Trump’s argument that Ginni Thomas’ favorite President is no Gitmo detainee surely will work with Clarence, who will decide whether to take this appeal (or ask the entire court to weigh in). But along the way, Trump has compared himself unfavorably — legally, at least — with a former Gitmo detainee.

Update: One more thing Trump doesn’t tell SCOTUS: That Judge Cannon has altered her own order, taking the classified documents out of it altogether, which makes Vladeck’s point about emergency relief even more hysterical.

Update: Justice Thomas has given the government a week to respond, which suggests even he doesn’t see this as the emergency it would have to be for SCOTUS to get involved.

On one hand, Trump’s case is weak. On the other hand, Clarence Thomas and the Federalist Society majority at SCOTUS..

On one hand, surely all of the justices have read the hand-wringing over Aileen Cannon’s judicial incompetence by the nation’s legal scholars. They must realize that if they side with Trump they will lose even more of their extremely flimsy legitimacy.

On the other hand, Clarence Thomas and the Federalist Society majority at SCOTUS. I am making no predictions. 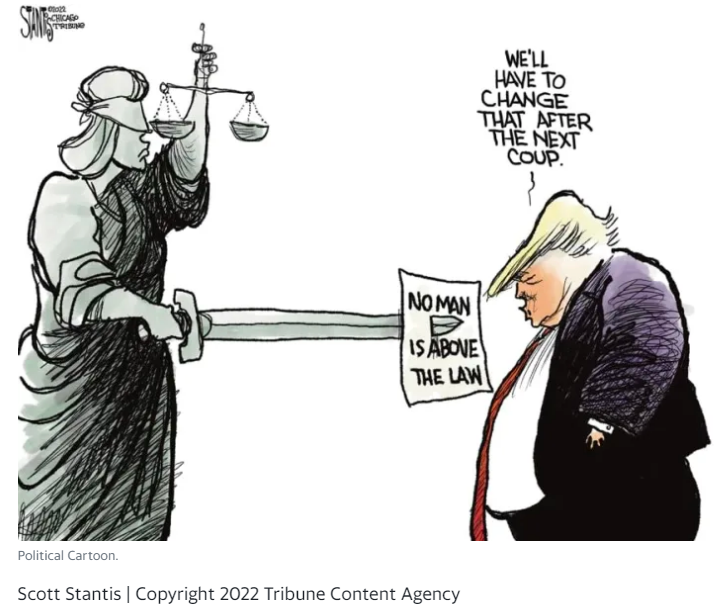 9 thoughts on “Trump Wants His Documents Back”