Yesterday U.S. District Judge Donald Middlebrooks slapped Trump and his lawyer with nearly $1 million in court-imposed sanctions for filing a frivolous lawsuit. Trump sued a bunch of people (see chart) claiming they all conspired to smear him with the false narrative that his 2016 presidential campaign was colluding with Russia. Which I still say wasn’t false.

Here’s the table of how much Trump and Alina Habba have to pay. I really think headline should be; BREAKING Trump to pay Fusion GPS $50 Grandhttps://t.co/Rei09w5Rh3 pic.twitter.com/aQJhc52ewF

Trump and and his lawyer are jointly and severally liable for the total amount of sanctions the judge imposed to cover the defendants’ legal fees and costs, which comes to $937,989.39. From the judge’s decision:

This case should never have been brought. Its inadequacy as a legal claim was evident from the start. No reasonable lawyer would have filed it. Intended for a political purpose, none of the counts of the amended complaint stated a cognizable legal claim. …

…Thirty-one individuals and entities were needlessly harmed in order to dishonestly advance a political narrative. A continuing pattern of misuse of the courts by Mr. Trump and his lawyers undermines the rule of law, portrays judges as partisans, and diverts resources from those who have suffered actual legal harm. …

… Mr. Trump is a prolific and sophisticated litigant who is repeatedly using the courts to seek revenge on political adversaries. He is the mastermind of strategic abuse of the judicial process, and he cannot be seen as a litigant blindly following the advice of a lawyer. He knew full well the impact of his actions. … As such, I find that sanctions should be imposed upon Mr. Trump and his lead counsel, Ms. Habba.

Regarding the alleged investigation of the “leak” of the Dobbs decision, late yesterday it was admitted that none of the justices were questioned. Chief Justice Roberts had the Marshal, a lady with an administrative position who has never investigated anything in her life, run the investigation. Could it be that the Chief Justice didn’t want us to know who the leaker is? Now the House Judiciary Committee (Gym Jordan, chair) is saying it will investigate the leak. Gym might get a friendly memo from the Chief Justice saying to cool it.

Other stuff to read: Paul Krugman on not negotiating with terrorists; Greg Sargent on how blue states can show the way out of red state culture war madness. 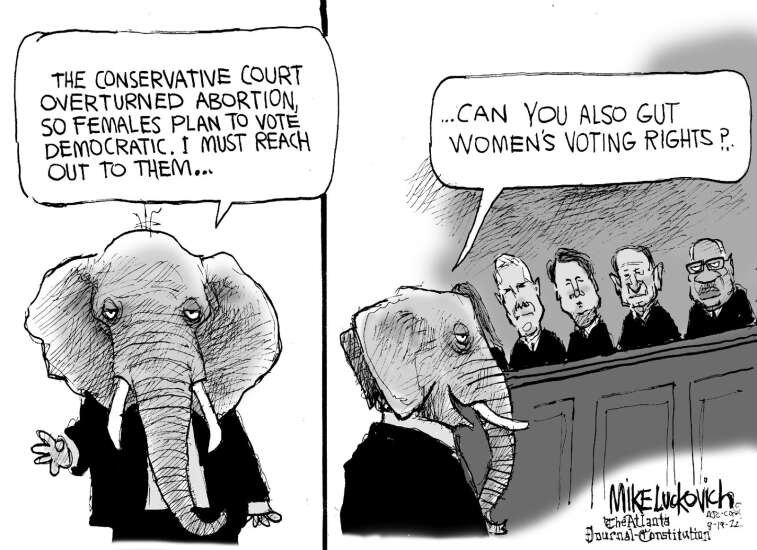