The public debt in the 14th Amendment, section 4:

Not that the House nutjobs care, but that seems to be saying that not raising the debt ceiling to allow payment of public debt is unconstitutional. Further, there are other laws that don’t give the executive branch much wiggle room about paying for stuff. Josh Marshall explains,

The nation’s op ed writers have mixed opinions about what to do. I’d already linked to this Paul Krugman column (no paywall):

A debt crisis, then, would be bad and possibly catastrophic. So should Democrats give in to Republican demands?

No. A party that barely controls one house of Congress shouldn’t get to impose deeply unpopular policies on the nation as a whole.

It’s important, Krugman thinks, to not save Republicans from themselves. If they drive the economy off a cliff, maybe we should let them.

Unfortunately, letting Republicans drive the U.S. economy off a cliff may be President Biden’s best option right now. The U.S. still has at least five months to jump out of the car. Treasury Secretary Janet L. Yellen said last week that she will pursue a set of “extraordinary measures” (all of which have become rather ordinary in recent decades) to postpone America’s day of reckoning until early June.  …

…Ultimately, Republicans would have to back down. Because the GOP’s rebels have become even more intransigent over the last decade, the standoff will probably go down to the wire, and the government may be forced to shirk some obligations for a few days, or even weeks.

By then, perhaps crashing securities markets, outraged beneficiaries and shifting voter attitudes would finally persuade enough holdouts to raise the debt ceiling. In the meantime, we have no choice but to let this game of chicken play out.

Biden could invoke the 14th Amendment and single-handedly raise the debt limit — as former President Clinton suggested during the debt-ceiling standoff of 2011. Adopted in the immediate aftermath of the Civil War and ratified in 1868, the amendment states that the “validity of the public debt of the United States … shall not be questioned.”

This would have huge political risks, and who knows if the nutjob Supreme Court would uphold it?

Jamelle Bouie, the New York Times makes the same suggestion, noting that President Biden has vowed to not negotiate.

This is the right approach — there were, after all, no negotiations over the debt limit when Donald Trump was president — but Biden could and should go further than rejecting Republican brinkmanship; he should reject the debt limit itself as an unconstitutional use of congressional power.

Basically, not raising the debt ceiling isn’t just a matter of economic catastrophe. It also creates a constitutional crisis because not honoring the debt is unconstitutional and the President under law has to spend the money Congress has appropriated.

The Democrats appear to be united against negotiation with the exception of Joe Manchin, who is flapping around wanting to be all bipartisan and shit. If Princess Kyrsten has said anything about the debt ceiling I haven’t heard it. The Washington Post is reporting that White House people want to force the House Republicans to abandon their hostage taking.

The GOP’s stance has forced White House officials to grapple in recent weeks with what their options would be if the Treasury Department can no longer meet the federal government’s payment obligations, according to five people with knowledge of preliminary internal conversations.

Those discussions have led administration officials to conclude, at least for now, that the only viable path is to press Republicans to abandon their demands to extract policy concessions over the debt limit — a position they have publicly reaffirmed in recent weeks. The Biden administration is focused on pressing the GOP to unveil a debt limit plan that includes spending cuts, with the hope that such a proposal will prove so divisive among Republicans that they are forced to abandon brinkmanship. This strategy stems in part from the belief among White House officials that it would be enormously risky either to negotiate policy with the GOP on the debt limit or try to solve it via executive order — and they appear willing to put that premise to the test.

President Biden says he and Kevin McCarthy are “going to have a little discussion” on the debt ceiling. Should be fun. I assume the President will tell the Speaker that whatever damage he does to the economy will be hung around his neck. 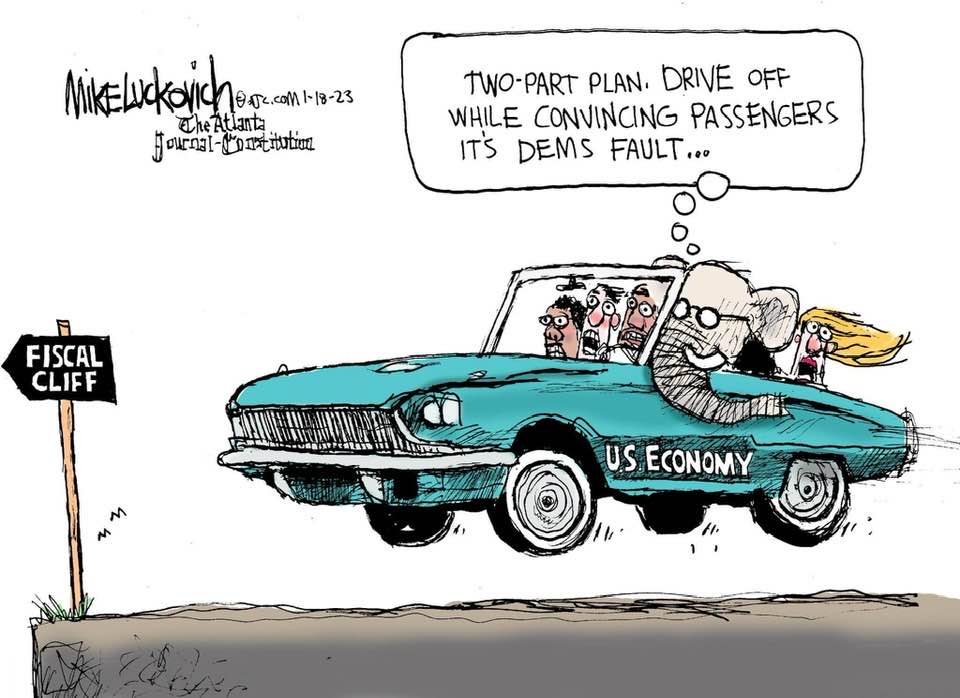