Big headline at WaPo this mornng — 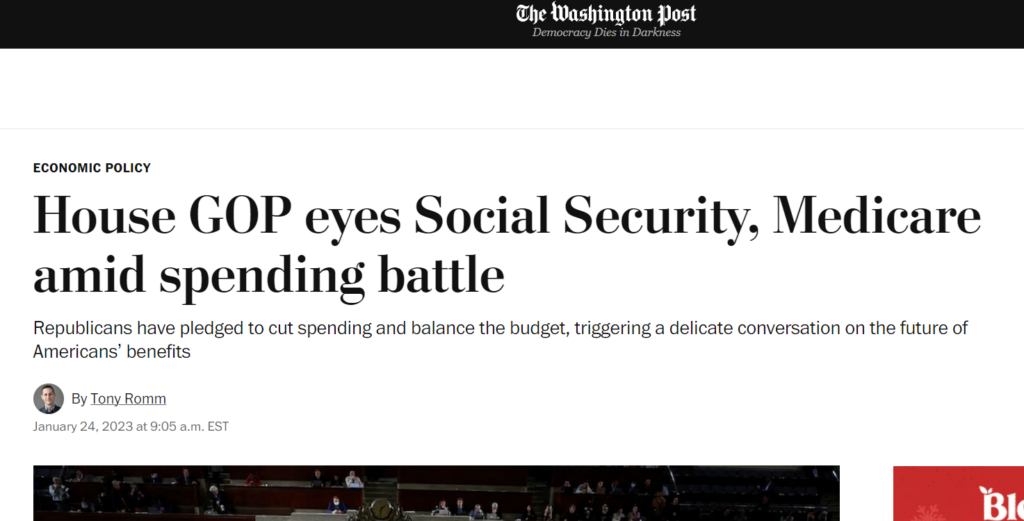 First, I’m trying to remember an election in my lifetime in which Republicans haven’t pledged to cut spending and balance the budget. I wasn’t sure about Eisenhower, who is the first Republican president I remember, so I looked him up. Yep, he did. And he sorta kinda balanced the budget for a brief time, making him the last Republican president to do so — with the help of a Democratic Congress — more than 60 years ago. So I can’t say that Republicans have never balanced the budget, but they haven’t done it since Eisenhower. Whether they ever managed it before Eisenhower, I don’t know.

We all remember, I’m sure, that the last time the budget was balanced was during the Bill Clinton administration. And George W. Bush absolutely could not stand it. He and the Republicans in Congress would not rest until they had screwed up federal finances by cutting taxes and sending everybody big tax rebates, because obviously if there was a balanced budget that meant the federal government was collecting too much in taxes! And then of course he started the stupid War on Terror, which transferred endless amounts of taxpayer dollars to the military-industrial complex and who knows where. Dubya, having been handed a balanced budget, left us with a $3.293 trillion budget deficit, it says here. Brilliant.

So Republicans need to forgive me if I don’t take their pledges to cut spending and balance the budget seriously. Of course, they do want to cut spending, especially benefits essential to ordinary people, but they aren’t going to balance any budgets without raising taxes and sending a beefed up IRS to collect it from those who hoard most of the money.

From the article in the screen grab:

Only weeks after taking control of the chamber, GOP lawmakers under new Speaker Kevin McCarthy (R-Calif.) have rallied around firm pledges for austerity, insisting their efforts can improve the nation’s fiscal health. They have signaled they are willing to leverage the fight over the debt ceiling — and the threat of a fiscal doomsday — to seek major policy concessions from the Biden administration.

So far, the party has focused its attention on slimming down federal health care, education, science and labor programs, perhaps by billions of dollars. But some Republicans also have pitched a deeper examination of entitlements, which account for much of the government’s annual spending — and reflect some of the greatest looming fiscal challenges facing the United States.

In recent days, a group of GOP lawmakers has called for the creation of special panels that might recommend changes to Social Security and Medicare, which face genuine solvency issues that could result in benefit cuts within the next decade. Others in the party have resurfaced more detailed plans to cut costs, including by raising the Social Security retirement age to 70, targeting younger Americans who have yet to obtain federal benefits.

House Republicans want to hold the debt ceiling hostage so that Democrats will bend to their demands to cut spending and balance the budget, but they can’t decide what those demands are. They can’t come up with a plan for cutting spending and balancing the budget, even as they stamp their feet and insist the debt ceiling not be raised, because reasons.

Catherine Rempell, not a great columnist, but she’s right here:

And even if Democrats wanted to pay a ransom for this hostage, it’s unclear that there’s any ransom Republicans would accept.

Republicans say they want lower deficits — in fact, they have pledged to balance the budget (that is, no deficit at all) within seven or 10 years. But they have not laid out any plausible mathematical path for arriving at that destination. They promise to cut “wastefulspending” … but can’t agree on what counts as “waste.”

This is similar to their pre-midterm promises to end inflation, even though none of them ever presented a plan for ending inflation. Have any of them said anything about inflation lately?

If I were in Congress, or the White House, I would very loudly demand that the Republicans come up with an agreed-upon, concrete plan for spending cuts and budget balancing that the Congressional Budget Office agrees will work, before there can be any negotiations. This plan will have to be specific; fantasy numbers about “waste and fraud” won’t be acceptable. I think it’s safe to assume they won’t be able to do it. In particular they won’t be able to do it without going on record that they plan to cut things that the American people don’t want cut.