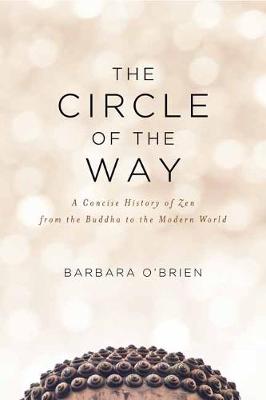 The Circle of the Way: A Concise History of Zen from the Buddha to the Modern World (Shambhala, 2019)

Zen Buddhism has a storied history—Bodhidharma sitting in meditation in a cave for nine years; a would-be disciple cutting off his own arm to get the master’s attention; the proliferating schools and intense Dharma combat of the Tang and Song dynasties; Zen nuns and laypeople holding their own against patriarchal lineages; the appearance of new masters in the Zen schools of Korea, Japan, Vietnam, and later the Western world. The Circle of the Way brings clarity to this huge swath of history by charting a middle way between Zen’s traditional lore and the findings of modern scholarship. In an accessible and entertaining style, it parses fact from fiction while always attending to the greatest interest of contemporary practitioners—the development of Zen doctrine and practice as a living tradition across cultures and centuries. (Scroll down to order!)

New: See the rave review in Asian Review of Books!

This book fills a very important niche, and I would like to encourage all Zen folks, the rather new or very experienced, to read it. For people new to Zen and wanting to know about its history and origins in India, China and Japan, the book provides an extremely well-researched yet easy to read, reasonably short but amazingly comprehensive, serious in content while very often fun and funny, wide ranging introduction to Zen’s roots and development right down to modern times and Zen’s coming west. It is a serious history book, yet not a heavy read.  [More!]

This wonderful book fills a serious gap in our current library of Zen literature.

At 316 pages, including bibliography and index, it’s not too brief, not too long. What Circle of the Way is, is an immensely readable study of Zen, showing from where it comes, and, critically addressing what it might mean for us in our lives today and in this particular place. It is a must read for anyone who cares about Zen. [More!]

“This book is written for those who see the word Zen tacked onto everything from tech products to soap and wonder what it is,” writes Barbara O’Brien, who, unsatisfied with the lack of a comprehensive and suitable history of Zen for Western students, decided to take the challenge on herself. The Circle of the Way: A Concise History of Zen from the Buddha to the Modern World (Shambhala 2019) offers an accessible approach, taking the middle path between traditional narratives and historical scholarship. Negotiating the complexities that surround the term Zen from its contemporary commercial implications, detangling its messy historical narratives preserved in multiples languages and often contradictory sources, and parsing out the ambiguities of historical and scholarly studies is no easy task. Yet O’Brien, a practitioner writing for other practitioners, brings new research, as well as attention to less studied Zen traditions in Korea and Vietnam, to deliver the book she was looking for.

“A comprehensive history of Zen Buddhism written by and for Zen practitioners in an inviting, accessible style. It features many of the classic, sometimes hilarious stories that make the Zen tradition so rich.” —Dale S. Wright, author of What Is Buddhist Enlightenment?, Philosophical Meditations on Zen Buddhism, and co-editor of a series of five books on Zen history

“Whenever I want a succinct, trustworthy, well-researched exploration of a Bud­dhist topic, I go to Barbara O’Brien’s work. In this wonderful offering, we receive a much-needed history of how Zen came to be what it is today. In her deft way, O’Brien balances traditional narratives with historical scholarship, telling a story that one trusts immediately to be thoroughgoing. The Circle of the Way is another example of O’Brien’s great gift for synthesis and scholarship, and a tremendous gift to everyone interested in the Zen way.” —Bonnie Myotai Treace, founding teacher at Hermitage Heart Zen and author of Winter Moon: A Season of Zen Teachings

“Barbara O’Brien’s wide-ranging account of Zen history is conveyed with a master storyteller’s ability to keep the forest from getting lost in a myriad of trees. Wearing her scholarship lightly, she blends just the right amount of skepticism about her hagiographic sources with a deep appreciation for the Dharma.” —Barry Magid, author of Nothing Is Hidden and Ending the Pursuit of Happiness

“The Circle of the Way is a wonderful addition to a Zen library. This book manages to educate without lecturing, to address controversy without attack, and to cover an old topic in a refreshing and humorous way. An amazingly clear explanation of what parts of the history have previously been accepted but should be questioned, as well as those that have now been verified.” —Grace Schireson, author of Zen Women: Beyond Tea Ladies, Iron Maidens, and Macho Masters

“Finally! A clear and concise introduction to Zen Buddhism. The Circle of the Way fills a long-standing need for a simple, straightforward explanation of where Zen comes from, what the foundational teachings are, and how they coalesce as a school of Buddhism. O’Brien loves the subject but never lets it take itself so seriously as to miss the lively mix of Zen’s internal contradictions and its profound teachings. This is a wonderful book.” —James Ishmael Ford, author of Introduction to Zen Koans: Learning the Language of Dragons

Order from the Publisher

Order from an Independent Bookseller