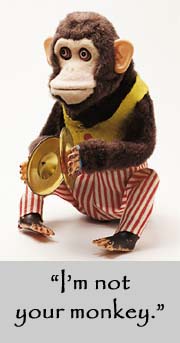 1. The Mahablog is not a public utility. It is my property. I created it and pay for the bandwidth. I maintain it for my own purposes. Although I prefer not to hold comments in a moderation queue for approval, any comments posted here remain posted at my discretion.

2. I respect and encourage substantive commentary, but comments that are nothing but insults of me or other commenters will be deleted. Repeated attempts to post such comments will get the commenter banned.

2a. I might delete an insult of a public official if I judge it to be slanderous.

2b. I also don’t care much for sexually explicit or crude humor, at anyone’s expense. I might put up with it up to a point, but I will more likely delete it.

3. Comments that I judge to be racist (this includes antisemitism), sexist, or homophobic will be deleted. Repeated attempts to post such comments will get the commenter banned.

3a. However, reasonable and factually supported criticism of actions and policies of the government of Israel would not usually qualify as antisemitic.

5. All religions will be treated with respect here. Comments that insult religion(s) per se or people for being religious will be deleted. However, stupid things specific people or groups do or say in the name of religion are fair game.

6. Atheism will be treated with respect here. However, atheists with a vendetta against religion per se (and not specific religious people or groups doing something stupid) are subject to slamming.

7. Contrary to rumor I do not automatically delete all comments that criticize my posts. However, if you are going to rebut something I’ve written, be prepared to offer facts (with links to documentation of the facts) in support of your position.

7a. Any claims that are unsupported by fact (or “facts” that are not, in fact, factual) may be deleted if I don’t have the time and energy to write a rebuttal. I don’t allow The Mahablog to be a conduit of unchallenged misinformation.

7b. Note in particular that comments claiming that the World Trade Center towers (including Building 7) were destroyed by controlled detonation will be deleted. Repeated attempts to post such comments will get the commenter banned.

7c. Also, if you address me or other commenters in a derisive manner I will delete your comment without reading it.

7d. Arguments are over when I say they are over. Commenters who continue to post arguments that I or someone else already have thoroughly demolished will be banned for being tiresome.

7e. I dislike commenters who expect me to write long defenses and explanations of something I’ve already written. I’m not your monkey. If you really care what I think about any particular topic, you can search the entire Mahablog archives by googling

8. Nothing, and I repeat nothing, pisses me off more than commenters who obviously haven’t read the post they are commenting on and have no idea what the post actually says or what my opinion actually is.

9. Comments may be deleted for being off topic, but not necessarily. I normally don’t care about off topic comments unless the comment threatens to pull the entire comment thread into uncharted territory.

10. Nobody badmouths Ulysses S. Grant on The Mahablog.

11. Anyone who calls anyone else “Obamabot” automatically forfeits commenting privileges.