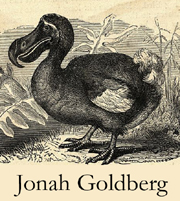 Speaking of tar pits and the critters who sink into them, I just saw this head and blurb on the Los Angeles Times site:

Jonah Goldberg: Does being the leader of the free world make the U.S. an empire? Who cares?

I can’t bring myself to actually read it. You can, if you have the courage. I just want to ask … Has he not noticed that “Pax Americana” turned into “Bellum Americana” (excuse my Latin) some time back? Does he not realize that the “free world” would not follow Dear Leader even to a buffet table? Does he not know what an empire is? And does Goldberg make a bag of hammers look brilliant, or what?

Well, don’t get me started.

And then there are Democrats. Bob Herbert has a gloomy assessment of the current field of presidential candidates.

A friend of mine, talking about the Democratic presidential candidates, tossed out a wonderful mixed metaphor: â€œThis is awfully weak tea to have to hang your hat on.â€

The notion that Bush & Co. had fouled things up so badly for Republicans that just about any Democrat could romp to victory in 2008 was never realistic. Whatâ€™s interesting now, with the first contests just weeks away, is the extent to which Democratic voters are worried about the possibility that none of their candidates have the stuff to take the White House.

This election, the most important in decades, cries out for strong leadership. The electorate is upset, anxious and hungry for change. But â€œweak teaâ€ is as good a term as any to describe what the Democrats are offering.

I can’t say I disagree.

Bush-bashing is not enough. Unless one of the Democratic candidates finds the courage to step up and offer a vision of an American future so compelling that voters head to the polls with a sense of excitement and great expectation, the Republican Party could once again capture the White House (despite its awful performance over the past eight years) with its patented mixture of snake oil and demagoguery.

The G.O.P. game plan is already being pieced together. The White House hopes to inoculate Republican candidates on the Iraq war issue by bringing home a significant number of combat troops in the middle of the general election. And the demagogic issue of choice for 2008 is immigration.

The Willie Horton ugliness of 1988 will be like nothing compared with the concerted attack to be unleashed by the G.O.P. on illegal immigrants next year.

The Democrats will have to figure out a way to counter that with an appeal to the better angels of our nature, and that will require courage.

Of the current field, I think Barack Obama is the one most likely to catch fire with the vision thing. When he’s on his game, he’s electrifying. But his campaign so far hasn’t shown as much spark as I anticipated it would. Maybe he’s pacing himself.

At the Washington Post, AndrÃ©s Martinez makes an interesting observation:

I remember being in Europe on the eve of the 2000 election and seeing polls that showed about 85 percent of the people in Holland favored Al Gore. And that was back when Bush was known as a compassionate conservative who worked well with Democrats and talked about a “humble” foreign policy. His “popularity” in Holland has taken quite a hit since then.

There is no way around it: Bush’s departure will be a good day for the U.S. “brand” around the world. And while wanting to be liked isn’t the sole criterion on which to base your vote, it’s hard to deny that the election of a Democrat would result in a a bigger boost to America’s international brand. …

… On the whole, change will likely be welcomed around the world. And setting aside any other merits or demerits of Barack Obama’s candidacy, given his life story I do think the conventional wisdom is right: His taking the oath of office on Inauguration Day would count as a massive propaganda coup for the United States.

That’s the single biggest reason I’m rooting for Obama. That does not count as an endorsement, however. Presidential candidates always should have caveat emptor stamped on their foreheads. In past history, many sparkling candidates proved to be disappointing presidents, but a few have exceeded expectations.

I’m actually not too worried. Our guys may be a pack of mutts, but theirs are … well, you know.