Mike [Huckabee] is soaring ahead in the early polls, in a surge to the front of the pack that suggests Republicans cannot come to grips with the idea that they are supposed to nominate either Mitt Romney or Rudy Giuliani for president. There has to be a way out! What about Huckabee? He has a good heart! True, his brain doesnâ€™t seem to have a single thought about foreign policy or know much about domestic policy, for that matter. But one well-functioning body part is better than nothing. …

… The Republican pack is one extremely unappealing bunch of politicians, and itâ€™s no wonder that the poor voters have developed buyersâ€™ remorse before theyâ€™ve come near the cash register. Huckabee is this weekâ€™s exercise in avoidance, and heâ€™s not likely to be the last.

If Iowa opts for Mike (More Sincere Than Mitt, Less Weird Than Rudy), chances are that New Hampshire voters will decide that going that way lies disaster. Theyâ€™ll probably go for Mitt (Fewer Wives Than Giuliani and More Money Than Anybody Else). Once the small states have spoken, Florida voters may be so appalled by the idea of having to listen to Mitt talk about his beautiful marriage for four years that theyâ€™ll opt for Rudy (More Consistent Than Mitt and Remember 9/11). While some candidates are focusing on small states and face-to-face campaigning, Giuliani seems to do best in large states where very few people have actually met him.

Then, somewhere around South Dakota, Fred (Extremely Tall) Thompsonâ€™s strategy will finally unfold and the voters will give him the nomination because theyâ€™ve forgotten he was ever in the race.

Collins’s op ed, and this Huffington Post piece by Sam Stein, provide fairly unflattering portraits of Huckabee. We learn from Collins that Huckabee once attempted to stop an abortion for a 15-year-old retarded girl who had been raped by her stepfather. We also learn that the Rev. Huckabee likes to get presents. (When then-Governor and Mrs. Huckabee publicly renewed the vows of their 30-year marriage, they registered their wish list at Target and solicited gifts. Wedding gifts are exempt from ethics restrictions in Arkansas.) And Stein assures us that Huckabee is serious when he says he wants to take the nation back for Christ.

I didn’t watch the last GOP debate, but apparently Huckabee’s performance got a big boost from Alan Keyes. Although John Dickerson claims that

Huckabee didn’t need Keyes to help him. He did just fine on his own. His front-runner status fit him Wednesday afternoon (unlike his suits) as he gave thoughtful answers on issues from education to unemployment.

In a great bit of luck for the Huckabee team, the event included Alan Keyes, a candidate so wacky heâ€™s generally excluded even from the none-too-selective list of Republican debaters. It was the perfect way to combat the impression that Huckabeeâ€™s religious beliefs, which seem to rule out evolution, are extreme. Next to Keyes, he looks like a logical positivist.

As near as I can tell, Romney’s “religion” speech of last week had no impact on his chances for the nomination. People queasy about his Mormonism are still queasy about his Mormonism. The Weekly Standard endorsed Romney last week, calling him a “full-spectrum conservative.” They seem to think that Romney, more than the other candidates, could keep the fracturing conservative coalition together. But this tells us that, for all their pandering to the Christian Right, the urban elitists of the National Review never really understood the Bible Belt culture and values they claimed to champion.

So it has come to this: the 2008 Republican Iowa caucuses have descended into a kind of holy war. The clash centers on issues that are, in Saint Augustine’s phrase, ever ancient, ever new: the nature of God, the disposition of power and the sanctity of conscience. The skirmish pits Huckabee against Romney in a story of hardball politics and high-minded history, of shadowy slurs and noble principles.

Fights about faith and politics have been with us always. In 1800, there were advertisements saying voters could have “Adams and God, or Jefferson and no God.” Andrew Jackson resisted the formation of a “Christian Party in Politics.” Abraham Lincoln buried a proposed constitutional amendment designed to declare the nation’s dependence on, and allegiance to, Jesus. A century ago, in the 1908 campaign, William Howard Taft, a Unitarian, was attacked as an apostate by supporters of William Jennings Bryan, an evangelical Christian. “Think of the United States with a President who does not believe that Jesus Christ was the Son of God, but looks upon our immaculate Savior as a â€¦ low, cunning imposter!” The Pentecostal Herald said in July 1908.

Three weeks away from the Jan. 3 Iowa caucuses, it seems clear that we have not moved very far beyond where we were in the Taft-Bryan race.

Even Charles Krauthammer is bothered.

This campaign is knee-deep in religion, and it’s only going to get worse. I’d thought that the limits of professed public piety had already been achieved during the Republican CNN/YouTube debate when some squirrelly looking guy held up a Bible and asked, “Do you believe every word of this book?” — and not one candidate dared reply: None of your damn business.

Update: Is it just me, or does Charles Krauthammer look like a turtle? 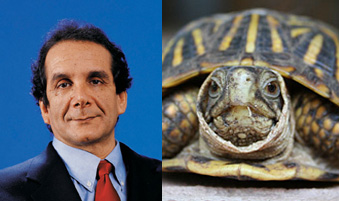 Dias, a Stockton native, said that when he started the free tour in September, some residents criticized it as a tasteless marketing gimmick. But as headlines announce record foreclosures and weeds sprout in the yards of abandoned homes, their tune has changed.

“We’re bringing in homeowners to get the grass green again,” he said.

As the brightly colored buses recently rolled through a subdivision dotted with “For sale” signs, a couple who were stringing up Christmas lights waved. The bargain hunters aboard waved back. Dias, who said his business was booming, offered a friendly beep…