— What senior Dems thought was going to happen: President JOE BIDEN was coming to the Hill to support Speaker NANCY PELOSI’s efforts to rally the party behind his historic $1.2 trillion bipartisan infrastructure plan ahead of a Friday vote.

— What ended up happening instead: Biden told them he wanted to hold off on BIF until there was a reconciliation deal — even if that means delaying the vote for several more days or even weeks.

As I wrote last week, the Democratic House “centrists” seriously believed President Biden should bring the hammer down on progressives to force through a vote on the bipartisan infrastructure bill. Instead, the President is taking the progressive position, that the reconciliation bill is the important one and cannot be left behind.

By all accounts, some of the centrists are still stunned. That is not what they expected.

The House Democratic centrists are led by Rep. Josh Gottheimer of New Jersey, a Clinton acolyte from way back. I’ve written about him before; see House Moderate Democrats Are the Bad Guys on Infrastructure from August 16 and “Moderate” Troublemakers Still Threaten to Derail Biden Agenda from August 25. Gottheimer and his crew of eight other Dems are closely aligned with big money groups like the U.S. Chamber of Commerce and No Labels (billionaires into capital management, equity firms, hedge funds, etc.). The Nine have worked hard to de-couple the bipartisan bill from the reconciliation Build Back Better bill. It’s possible they don’t really care if the bipartisan bill passes; they just want to use it to weaken if not stop the bigger bill.

But come Friday, Gottheimer was the lone name on the statement after, according to Politico’s Heather Caygle, no one else from his “unbreakable nine” would sign on. Later that evening, a Republican representative said one angry Democrat called Pelosi a “fucking liar” for not putting the bill on the floor, and there was little question about the identity of that angry Democrat.

This was the plan:

The goal of Gottheimer’s group had been to pass the infrastructure bill and then train their fire on the bigger bill. Free the hostage, then blow up the insurgents. Their demand went against the grain of the Democrats’ two-track strategy, but Pelosi conceded by giving them a date for the infrastructure floor vote: September 27.

Gottheimer and some of his allies then huddled with the dark-money group No Labels, which finances their campaigns and was instrumental in organizing the opposition. “You should feel so proud, I can’t explain to you, this is the culmination of all your work. This would not have happened but for what you built,” Gottheimer told them, according to a recording of the conversation obtained by The Intercept. “It just wouldn’t have happened — hard stop. You should just feel so proud. This is your win as much as it is my win.”

Rep. Kurt Schrader, D-Ore., former chair of the right-wing Blue Dog Coalition, celebrated that the victory would let them focus next on fighting the reconciliation package, which he told the group he opposed. “Let’s deal with the reconciliation later. Let’s pass that infrastructure package right now, and don’t get your hopes up that we’re going to spend trillions more of our kids’ and grandkids’ money that we don’t really have at this point,” Schrader said.

Until very recently, like maybe this week, the pattern has been that Conventional Wisdom automatically sided with the centrists, and all of the pressure in Washington would have come down on the progressives to back off. Ryan Grim continues,

But House progressives quickly responded, vowing to block the bill — to hold the line — if it came to the floor without the broader spending bill. Gottheimer remained confident over the next several weeks, saying privately that he was sure the progressives would fold. On September 27, it was clear that there weren’t enough votes to pass the bill, and Pelosi pulled it from the floor, rescheduling it for a September 30 showdown.

On CNN Thursday, Gottheimer gave the bill a “1,000 percent” chance of being passed that day. He never got close, and the bill was pulled again, leaving Gottheimer to meekly argue that the House had not been technically adjourned. Friday would still be the same “legislative day,” he tweeted, and negotiations were ongoing and he was grabbing Red Bull and Gatorade and — hey, where’s everybody going?

The times, they are a-changin’. President Biden has made it clear he agrees with the progressives — if the bipartisan bill is allowed to pass by itself, the reconciliation bill will be destroyed. That’s been the entire purpose behind coupling the two bills; factions supporting one will have to support the other also.

The progressives have been clear that they have agreed to that plan, and that they will vote for the bipartisan bill to secure passage of the bigger bill. It’s the centrists who are trying to break the deal.

In the through-the-looking-glass media coverage of the Democrats’ brutal slog to pass President Biden’s agenda, the story has often been that radicalized progressives are threatening to derail the whole thing, because they refuse to accept the “reality” that the final package must be in sync with what the conservative faction of Democrats says is “possible.”

But this gets the story wrong. In fact, the progressives’ stand on Thursday makes successful passage of Biden’s agenda more likely, not less. To be clear, it’s very plausible the whole thing could still implode. But if so, that lefty stand won’t be why.

By refusing to help pass the infrastructure bill, progressives helped secure more space for negotiations on the reconciliation framework. The reconciliation bill is the Biden and Democratic Party agenda: It’s made up of all the climate provisions, economic infrastructure and tax reforms designed to secure our decarbonized future and rebalance our political economy after decades of upward skew.

The centrists are the ones who oppose passing this agenda.

I’m still seeing news stories and commentary that make the progressives out to be radical bomb throwers who are trying to stop what’s practical and possible. But after President Biden’s visit to the House yesterday, perhaps there will be less of that. We’ll see.

The savvy journalist’s view of politics is based in part on the assumption that ideologues are problematic — they’re inflexible, they’re impractical, they care more about purity than that most noble of objectives, Getting Things Done.

Centrists and moderates, on the other hand, supposedly understand the real world and are willing to work with others to solve problems. Which is why, for instance, a bipartisan group of House centrists named themselves the Problem Solvers Caucus.

But what if all those ideas are backward? What if it’s the ideologues who are able to get things done, and it’s the centrists who stand in the way of solving problems while they knuckle under to special interests who don’t have the welfare of the country at heart?

The current Democratic attempt to pass President Biden’s agenda is demonstrating just that.

A lot of us have been saying that for years; it’s the centrists holding us back, not the progressives.

Waldman goes on to say that while Joe Biden wasn’t their preferred candidate, progressives worked hard to elect him. And progressives are not letting the perfect be the enemy of the good; they are accepting compromises to get something from their agenda passed. Failure is not an option. But for the centrists, failure is an option. If both bills go down in flames, they can live with that. The centrists are centrists because they are comfortable with the status quo and aren’t on fire to make big changes.

That general lack of urgency about addressing issues may be one reason that the Problem Solvers Caucus, which was formed in 2017, can’t say it has actually solved any problems. On their website, these lawmakers tout a few areas of agreement among themselves, but they haven’t managed to use their alleged problem-solving prowess to push any legislation to passage.

And that, children, is why we can’t have nice things. But maybe something can be salvaged from this. 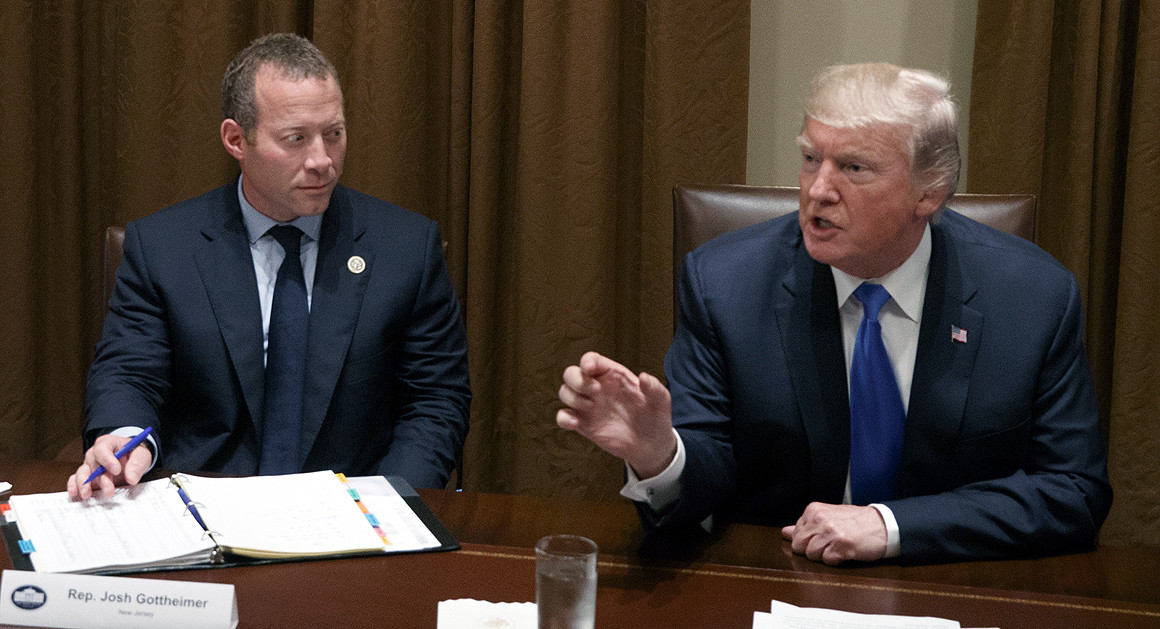 Josh Gottheimer, left, and some other guy.