Every now and then, somebody cuts through all the crap and gets to the heart of the problem. Today it’s Robin Givhan at the Washington Post, Identifying Danger in the Rittenhouse Case. (You can read this entire article without a firewall.)

“As the state wrapped up its case, Kenosha County Assistant District Attorney Thomas Binger told the jury, ‘You cannot claim self-defense against a danger you create.’

“This would seem obvious. But all too often, White men with guns do not see themselves as a danger. They cannot fathom that their actions are suspect. They cannot envision themselves as anything but patriotic and godly. Their moral certitude has been so deeply embedded into the collective mind-set that what they choose to protect, whether a nondescript auto center or a vulnerable human being, is quickly presumed to be valuable and worthy of protection. What White men choose to disregard comes to bear the taint of effluvium. As a culture, we are only now disentangling ourselves from this web. The process has been painful and exhausting.”

The issue of “privilege” is hard to grasp for a lot of us, but much has happened lately that makes it visble.

“Rittenhouse, with his youth, is a reminder that this sense of favor and privilege is not just embedded in an older generation. This belief in one’s infallibility, this certainty, has been inherited. It isn’t some relic of the past. It’s alive and vibrant in a generation that is only just coming of age, one that still has the chubby-cheeked roundness of childhood. One that was supposed to be so, so much better. Rittenhouse is a slayer of optimism about the human condition.

“The defendant seemed incapable of stepping outside of himself and considering how he might have appeared to others. On a chaotic and unnerving night, he wore no uniform to announce his affiliation or to make plain to whom he was accountable. He falsely identified himself as an emergency medical technician, according to Binger. He called himself an EMT, but one whose medical bag was a mere speck compared with the size of his gun. He was not a Kenosha business owner. He was a random guy with a gun. He was a loose cannon, a wild card. A danger in the eyes of others.”

I choose to assume Rittenhouse did not go to Kenosha with the intention of shooting someone. He appears to think that it was not his fault he shot three people. They made him do it. They were scary. He can’t fathom that he was scary; he was the one brandishing an assault weapon.

“If people remember any moment from the trial, it may well be when Rittenhouse cried during his testimony. His face contorted with emotion; he gasped for air as he spoke, until the judge called for a brief recess so Rittenhouse could compose himself. But it’s also important to remember that Rittenhouse wept as he described the risk he perceived to his own life. He was crying over the danger that he saw in others. He wasn’t shedding tears over the danger that he posed.”

Firearms are intimidating. When you are walking around carrying an assult weapon in your arms, you are intimidating. Nobody’s going to notice you also have a first aid kit at your side. If you wave the firearm around and point it at people, you are threatening. You are dangerous. People should have a right to protect themselves from you. 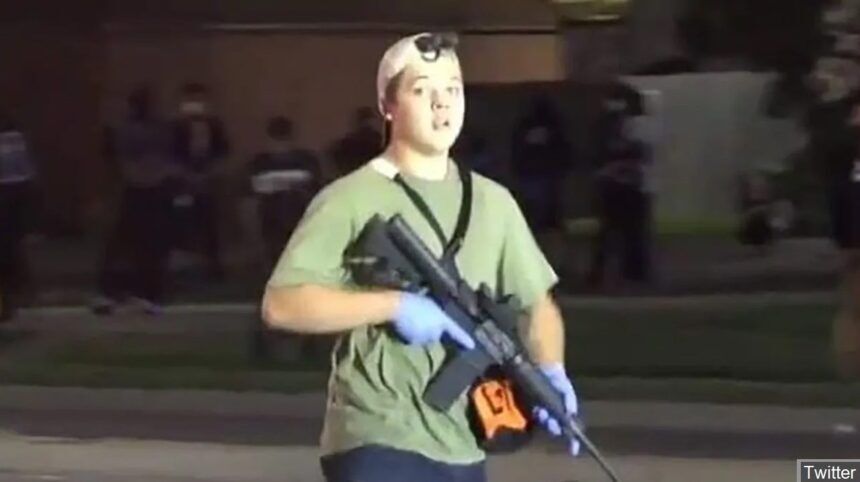 “White male Midwestern teenagers have inherited the luxury of not having to step outside of themselves. They don’t have to consciously consider whether their comportment might be viewed as threatening, their carriage suspicious or their demeanor cause for alerting the police. They have the psychic freedom to roam widely, to claim any space as their own. Until, all of a sudden, they don’t.”

It’s not just Midwestern teenagers. Look at the three men on trial for the murder of Ahmaud Arbery. There are many similarities to the Rittenhouse case.

In both cases, the defendants claim they were entitled to start shooting because the victims were trying to take their guns.

“In other words, their own decision to carry a gun became a justification to use it, lest it be wrested away from them,” said Eric Ruben, an expert on the Second Amendment at the S.M.U. Dedman School of Law in Dallas.

Ahmaud Arbery was out jogging. He was pursued and trapped by white men in pickup trucks who assumed he must be a burglar trying to get away, in spite of the fact that he wasn’t carrying anything resembling stolen loot. Arbery was “trapped like a rat,” one of the men told police. Arbery was not armed; the men who trapped him were.

“He was trapped like a rat,” Greg McMichael said, according to a transcript of their recorded interview Nohilly read in court. “I think he was wanting to flee and he realized that something, you know, he was not going to get away.”

Defense attorneys say the McMichaels and Bryan were legally justified in chasing and trying to detain Arbery because they reasonably thought he was a burglar. Greg McMichael told police Travis McMichael, 35, fired in self-defense as Arbery attacked with his fists and tried to grab his son’s shotgun.

Arbery had a reasonable expectation that these yahoos were about to kill him. This was Georgia, after all. Instead of placing himself at the mercy of his assailants, Arbery attempted to defend himself and was killed. This much is plainly obvious.

That was February 23, 2020. The local criminal justice system felt no apparent urgency to treat this killing as a crime. The case was passed around to three different prosecutors. One of the prosecutors wrote a memo saying that the shooting was “perfectly legal,” and that there were no grounds for making arrests. But then on May 5, a video of the shooting went viral on the Internet. The three white suspects were arrested on May 7. Funny how that works sometimes.

And let us not forget Trayvon Martin. Exactly the same thing. George Zimmerman assumed the privilege to judge that a black boy didn’t belong in his neighborhood. And he stalked and threatened Martin until Martin contronted him. And that gave Zimmerman the authority to kill Martin. It was self-defense, see. And the bleeping criminal justice system agreed.

“Self-defense laws exist because we as a society believe you are entitled to defend yourself with what would ordinarily be criminal violence if you face imminent, grave bodily harm or death. If someone breaks into your home and is threatening to kill you you have the right to kill them first. But if you created the dangerous or deadly situation the calculus changes. Or at least it should. Rittenhouse likely broke some laws being there with the gun in the first place. He was under 18 for instance. But the basic argument here is that Rittenhouse wasn’t doing anything wrong by just carrying around an AR-15. Wisconsin’s an open carry state. The inherent aggression and menace of carrying around high caliber weapons, which we’re told is only a problem for squeamish libs, becomes a path for the person carrying the fire arm to themselves feel threatened and decide they need to use the gun.

“The aggression carries the seeds of justification within it. You show up looking for trouble on yet another of these right wing murder safaris like Rittenhouse, with his mother chaperoning, was taking part in. You’re looking for trouble and when you find it that’s your justification for taking the next step. That’s not how self-defense is supposed to work. But we can see in this case how the interplay of open carry and permissive self-defense statutes do just that.”

Kyle Rittenhouse’s attorneys asked the judge on Wednesday to declare a mistrial, saying they received an inferior copy of a key video from prosecutors and would have approached things differently if they had received the higher quality video earlier.

Judge Bruce Schroeder did not immediately rule on the request, which came after jurors deliberating for a second day at Rittenhouse’s murder trial asked to review video evidence.

That was the video showing sweet little Kyle pointing his assault weapon at protesters before being chased by Joseph Rosenbaum, the first man he killed. The jurors, in deliberation, asked to review the video, which must have made the defense nervous.

The nation needs a conviction. The message needs to be sent that being white and well-armed is no longer privileged. Is there a chance the jury will convict? I have little hope of that. It may be the best we can hope for is a hung jury and another trial with a new judge. But we’ll see.

Also, too: A note on the recent fundraiser. The goal has been met, and I won’t nag you again. Thank you so much.