“Omicron” would be a good name for a Marvel Comics villain, and “The Omicron Variant” might be the title of a future Frederick Forsyth spy novel. But it’s a virus, and we have to deal with it.

I’ve been reading what researchers and not-researchers are saying about Omicron. The only thing everyone agrees is certain about Omicron is that it really is much more transmissible than earlier versions of the covid virus. Beyond that, we’re still in speculation mode. Preliminary data from around the world suggest that Omicron is less deadly than earlier versions, but the data collection people warn us that there are other factors impacting the data. What is true of one population group might not be true of another one.

This may be why CDC director Dr. Rochelle Walensky refused to be pressured into calling Omicron “mild” in a Fox News interview. “Mild” suggests it’s no worse than a head cold. But deaths from Omicron are being recorded around the world. There may be a lower rate of deaths than from earlier variants — so far — but the thing can still kill you. This is no time for complacency.

We keep hearing that vaccinated and boosted people are getting infected. But this is not a reason to panic. Derek Thompson of The Atlantic writes,

The easy question is whether a typical vaccinated (or recently infected) adult faces the same individual risk of severe disease from Omicron that she faced from the original coronavirus in March 2020. The answer is, almost certainly, no. The U.S. has banked a lot of immunity through infection and vaccinations, and the Omicron variant doesn’t seem to evade all of that built-up protection. In the past month, we’ve learned that Omicron excels at breaking through the first layer of immunity, which is our neutralizing antibodies. But our next layer of protection, our T-cell response, seems to hold up much better against the variant. If you think of the vaccines as a castle-defense system, Omicron is like an invading army that can scale walls (i.e., bypass neutralizing-antibody protection) but not fight the knights within them (i.e., overcome T-cell protection). Boosted Americans are particularly well equipped against the Omicron variant, because the third shot increases the number and quality of our neutralizing antibodies, which effectively builds up our immunity wall.

I like the castle analogy. Our T-cells are the guys up on the turrets dropping big rocks. 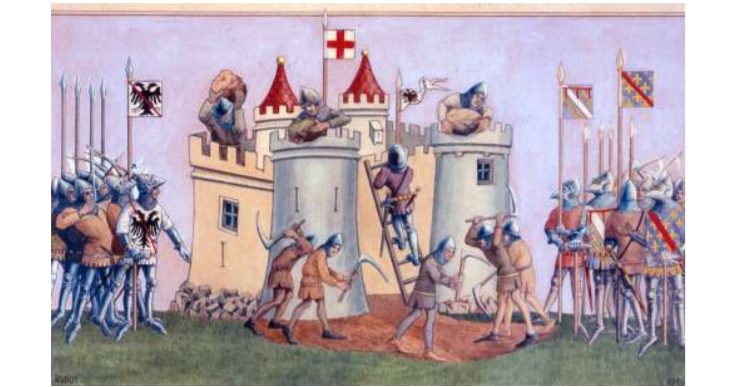 Thompson goes on to say that preliminary data point to a lower rate of severe infection among the unvaccinated as well, maybe. Data collected by the Imperial College of London showed Omicron is as dangerous as Delta, but this was based on a small sample.

Thompson writes that the best way to think about severity is to imagine four concentric circles. In the inner circle are younger, healthy people who have been vaccinated and boosted. They are probably safe from severe illness from Omicron, even if they catch it.

The next group out contains people under age 65 who are vaccinated and boosted, but who have some health issues that make them immunocompromised. They need to be more careful.

Those of us over 65 who have been vaccinated and even boosted are in the third ring out from the center. The older you are, the more vulnerable you are. Don’t take chances.

The unvaccinated are in the outer ring, and in that group some are more at risk than others. There’s a big concern that even if this group has a lower rate of severe illness, they are bound to have a higher rate of infection. It’s likely hospitals will be slammed again this winter.

At this point, we’re all hoping that Omicron is not as deadly as earlier variants, and many headline writers have jumped the gun and declared it to be so. But at the moment it would be wise to procede as if it’s just as bad as the other variants.  Fingers crossed, wear your masks and get your boosters.

What follows is speculation: MSNBC reports that some virologists think the Omicron variant could burn through populations rapidly, causing considerable sickness and death. But then just about everybody will have had covid or the vaccines, meaning everybody’s got some immunity, and finally the pandemic could end.

“As all the public health folks have been saying, it’s going to rip right through the population,” says Dr. David Ho, a world-renowned virologist and Columbia University professor. “Sometimes a rapid-fire could burn through very quickly but then put itself out.”

Nobody expects covid to go away completely, but perhaps it will stop upending lives. Yascha Mounk writes at the Atlantic that whatever happens with Omicron, sooner or later covid will cease to be a social phenomenon. We’ll learn to cope and adapt. Eventually there will be enough immunity in populations that covid will stop being a big deal. However, new variations could still throw that hopeful notion out the window.

And while variants may come and go, we will always have stupid.

A group of unvaccinated people who attended a huge conspiracy conference in Dallas earlier this month all became sick in the days after the event with symptoms like coughing, shortness of breath, and fever. Instead of blaming the global COVID pandemic, however, the conspiracy theorists think they were attacked with anthrax.

This far-right conspiracy claim began after a dozen people spent time together in a confined space at the ReAwaken America tour event in Dallas over the weekend of Dec. 10. And the fact that this was likely a COVID outbreak and superspreader event has been almost entirely ignored.

It’s a wonder our species has made it this far, frankly.