Since Tuesday’s massacre of children, Cruz has spoken several times of his grand plan to keep schools safer — we need school buildings with only one door that can be guarded by armed security officers. Just the thing if there’s a fire or bomb threat and the building must be evacuated quickly.

But let’s look at the many excuses Republicans make for U.S. gun violence.

Excuse #1: The Shooter Was Evil

I douldn’t find a transcript, but you’ve probably seen the video of the news conference in which Greg Abbott went on and on about how the shooter was evil and the shooting was senseless. He did so in a manner that almost looked like a shrug, as if the presence of evil and the senselessness of the act rendered him helpless to prevent it. He was trying to exonerate himself from blame. Here’s something I wrote a few years ago after another evil, senseless mass shooting:

Of all the labels being attached to Paddock, “evil” is the most useless. Calling something or someone “evil” is an avoidance strategy, in my opinion. It’s a way of absolving oneself or one’s culture, society or nation of responsibility for something. IMO our proclivity for sorting humanity into “good buys” and “bad guys” bins — we are always one of the “good guys,” of course — is the cause of most of the atrocities of the world. I’ve written about this in the past. Very few of the atrocities of human history were carried out by people who were fully aware they were doing something evil.

Calling the shooter “evil” doesn’t exonerate anyone. Same thing with calling them “crazy.” It doesn’t solve any problems. It serves no purpose. It provides no solutions.

And the fact remains that the U.S. hardly has a patent on evil, yet we have somehow cornered the market on school shootings. It’s a uniquely U.S. problem.

Excuse #2: The Shooter Was Mentally Ill

Gov. Greg Abbott said Wednesday that the Uvalde school shooter had a “mental health challenge” and the state needed to “do a better job with mental health” — yet in April he slashed $211 million from the department that oversees mental health programs.

In addition, Texas ranked last out of all 50 states and the District of Columbia for overall access to mental health care, according to the 2021 State of Mental Health in America report.

Prediction: Abbott will make no move to replace that $211 million. In a few weeks people will quit asking about it. We really do need better health services for people with psychiatric illnesses in this country, but I’m not seeing a big rush to supply such services coming from Republicans.

The “mental health” excuse may or may not have a basis in fact, but even if there were a law that prevented people with a diagnosed “mental illness” from purchasing firearms, it would make little difference because very few perpetrators of gun violence have a diagnosed mental illness at the time they obtained the firearm, whether legally or illegally, and when they committed the violence. I’ve written about this before, too. A lot.

Most of the time, mass shooters don’t have a definable “mental illness.” They do tend to have a similar complex of common personality and behavioral characteristics, however. They tend to be hotheads. They tend to be impulsive. Often they are socially awkward in some way; women may call them “creepy.” They don’t tend to have successful relationships, in other words, although sometimes they are married. Very often they have histories of domestic violence and animal abuse. They probably hoard several firearms and have for a while.

Guys like this are as common as toast. What they don’t have is any kind of brain or medically defined psychiatric illness that accounts for their decisions to kill people. They are not psychotic; they are not hearing voices in their heads or imagining that the nice people in the church are really space invaders.

When I say that most perps are not mentally ill I don’t mean that mental illness is never a factor. A couple of our famous mass shooters — James Holmes (Aurora) and Adam Lanza (Sandy Hook) could both have qualified as mentally ill at the time of the shootings, I believe, according to their medical records. But that’s two out of how many? There have been 27 school shootings in the U.S. just this year, and over two hundred mass shootings. Not to mention other firearm violence to be sorted into other categories. Even if you could stop every diagnosed schizophrenic in the U.S. from owning or carrying a firearm — and that wouldn’t be a bad idea —  it would probably make no measurable difference in the gun violence data.

One study found that only 11% of all mass murderers (including shooters) and only 8% of mass shooters had a serious mental illness.

Let’s get one fact out of the way — states with loose and permissive gun laws have higher rates of firearm related homicides than those with stricter gun laws. So, it would seem, gun laws DO work in the real world.

Texas Attorney General Ken Paxton’s immediate response to the latest gun massacre of elementary school children was to rush to the defense of the guns used to massacre those children. pic.twitter.com/4xl2txvmNr

Basically, this argument is an admission of helpessness, that there is nothing that can be done about gun violence. Laws won’t work. It just is what it is.

A variation of the “laws don’t work” argument is the Chicago myth — that Chicago has strict gun laws and yet it’s a shooting gallery. Greg Abbott made that argument in his press conference. “I hate to say it, but there are more people who are shot every weekend in Chicago than there are in schools in Texas,” Abbott said, according to CNN. “So, you’re looking for a real solution, Chicago teaches that what you’re talking about [gun regulations] is not a real solution. Our job is to come up with real solutions that we can implement.”

Yeah, we’re all waiting for you to come up with those real solutions, governor. Haven’t seen any yet. But I’ve written about the Chicago myth before. Chicago doesn’t have exceptionally tough gun laws. It used to, but the Supreme Court nixed those laws in 2010. And there are several other cities with higher homicide rates, or the rate of homicides per 100,000 population. (I couldn’t find city data for shooting deaths specifically, just state data.) St. Louis is still #1. See also griping from the Chicago Tribune.

See How the US fails to take away guns from domestic abusers: ‘These deaths are preventable’ at The Guardian. Here we have an example of one kind of criminal who really should be stopped from possessing firearms, and the law ‘n’ order crowd often can’t bring themselves to carry this out. So don’t waste our time whining about how laws don’t work.

School shooters are a slightly different crew. A study of U.S. school shooters found that all school shooters are male, with an average age of 18. Most of the time, these shooters intend the shooting to be a final act that they’ve been thinking about for a while; they are not acting impulsively out of rage. They post about mass shootings on social media. They are deeply unhappy, but not psychotic.

Inspired by past school shooters, some perpetrators are seeking fame and notoriety. However, most school shooters are motivated by a generalized anger. Their path to violence involves self-hate and despair turned outward at the world, and our research finds they often communicate their intent to do harm in advance as a final, desperate cry for help. The key to stopping these tragedies is for society to be alert to these warning signs and act on them immediately.

Making it easy and acceptable for these young people to seek help, to just bleeping talk to someone instead of holding it in, would probably help a lot also. I didn’t hear Gov. Abbott talk about that, though.

It’s a myth that more guns equal less crime, of course. There is all kinds of data showing that higher rates of gun ownership correlate to higher rates of gun death, including homicide. Putting more guns in the hands of “law-abiding citizens” absolutely does not make anybody safer, especially considering that many if not most mass shooters (including, I believe, the Uvalde shooter) were law-abiding citizens up to the moment they shot their first victim.

So making guns easier to purchase does drive up homicide rates, as we’ve been seeing in the U.S. in recent years. And “stand your ground” laws are linked to an 11 percent rise in firearm homicdes.

If you can think of any other excuses, please put them in the comments. I want to write another post about what needs to be done to reduce gun violence in the U.S. 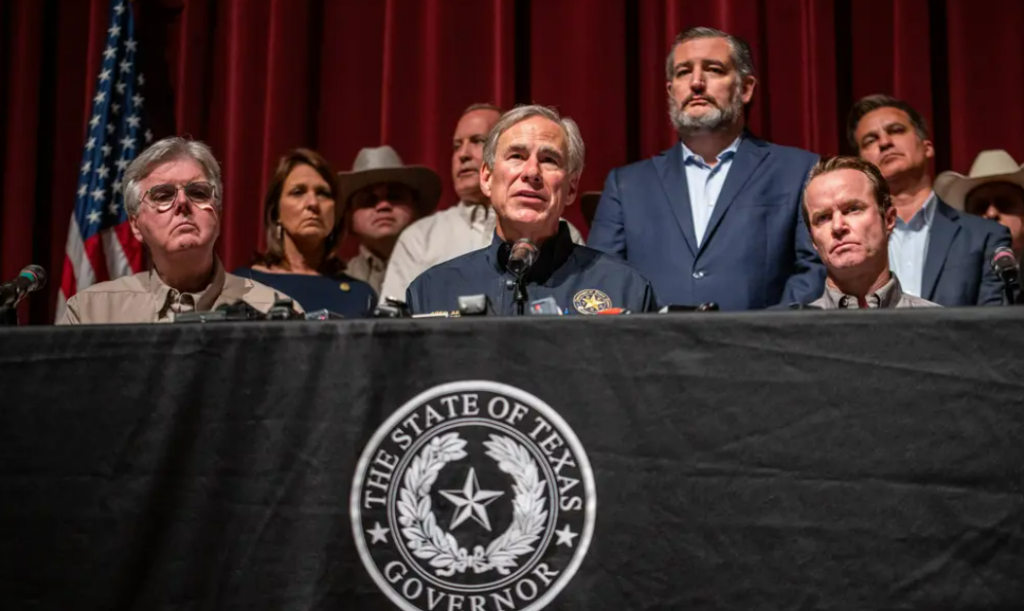