Glenn Thrush and Luke Broadwater report for the New York Times that the J6 Committee could begin sharing transcripts with the Justice Department as early as July. The committee had said earlier that Justice could have transcripts when they were publicly released in September.

“The Justice Department sent the committee a two-page letter on Wednesday accusing the panel of hampering the federal criminal investigation into the attack by refusing to share interview transcripts with prosecutors,” Thrush and Broadwater wrote.

The tone of the letter from Justice took the J6 Committee by surprise, apparently. But I don’t understand why transcripts can’t be given to the Justice Department now.

Note also that Merrick Garland isn’t going to spring criminal charges on anyone too close to the midterms. It that’s going to happen, it probably won’t happen until next year. I wish it were otherwise, though.

There’s no evidence yet that the hearings have moved any public opinion needles so far. I’d be a little surprised if they had. The Right is still in denial mode, ranging from hysterical repetition of long-discredited campaign fraud charges (see, for example, The Federalist) to sniffing recognition that, well, okay, Trump really should have let it go and accepted the election result once it was clear he had failed to stop the Biden inauguration, but these hearings are just about Democrats trying to salvage the midterms (see Byron York).

We’ve still got a long way to go to save our Republic. 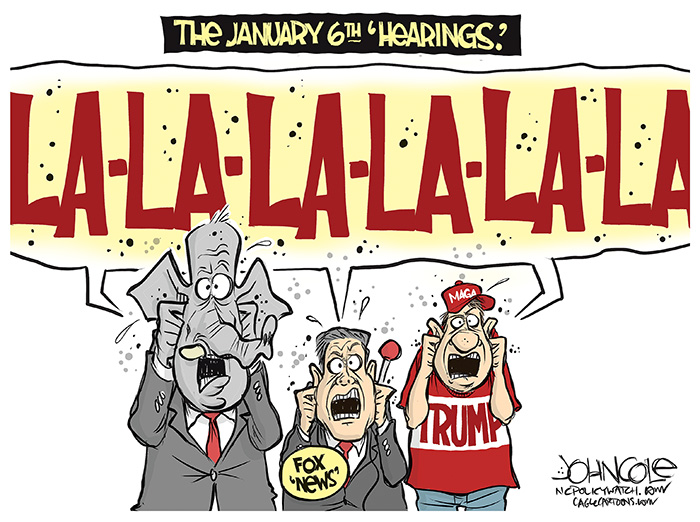