GOP politicians, Fox News, and law enforcement were more than prepared for any violence at protests of yesterday’s SCOTUS decision to overturn Roe.

For example, Fox News reports that police were forced to use tear gas on crowds of protesters surrounding the Arizona state house, and that legislators were “held hostage” inside. But a careful reading of the news story doesn’t reveal that protesters were violent, just that the legislators were afraid of them.

“Protesters threatened to break the AZ Senate entryway glass,” Republican Arizona State Senator Wendy Rogers tweeted, as members were in the middle of voting on a series of bills.

The situation escalated into a “hostage” situation as lawmakers were instructed not to exit the building, Republican Arizona State Senator Kelly Townsend said.

The Republican Caucus of the State Senate later called the protest an attempted “insurrection.”

But they didn’t actually break the entryway glass, I take it. Nor did they break into the building. It was a “sizable” crowd, the news story said. If they had intended to break the glass and enter the building, I suspect they would have.

“We are currently there being held hostage inside the Senate building due to members of the public trying to breach our security,” Townsend tweeted Friday night. “We smell tear gas and the children of one of the members are in the office sobbing with fear.”

It wasn’t the protesters throwing the tear gas, but law enforcement.

“While working inside we were interrupted by the sound of bangs and smell of tear gas,” Rep. Sarah Liguori tweeted Friday evening. “Protestors cleared from the Capitol.”

Heavily-armed officers were seen in and around the legislative building.

Granted, I wasn’t there, but one does suspect a gross overreaction. In America we are still allowed to protest outside statehouses, last I heard. But I guess not in Arizona.

There was some violence in Iowa.

A truck driver careened into a group of demonstrators in Cedar Rapids, Iowa, on Friday as they crossed the street during an otherwise peaceful protest of the overturning of Roe v. Wade.

The unidentified male driver of a Ford truck rammed into several protesters — all of them women — at the tail end of a procession, rolling over one woman’s ankle and sending her to the hospital, witnesses said.

Charming fellow. Was this covered by Fox News? One suspects not. The article goes on to say that police had interviewed the driver but … did not arrest him? Seriously?

Here’s another guy who may have some issues:

A Republican consultant called for people to “shoot to kill” abortion-rights protesters who he alleged would resort to violence after the Supreme Court‘s overturning of Roe v. Wade, according to a post circulating Friday on social media.

The Twitter page for PatriotTakes, self-described as a group of researchers “monitoring and exposing right-wing extremism,” shared a screenshot of the post from Colton Duncan. In the post, which appears to have been deleted from Duncan’s social media, Duncan wrote that when Roe gets reversed, “nasty, ugly gender-confused animals will torch American cities and do everything they can to tear down the fabric of America.”

The post goes on, “They should either be shot, or god-willing, apprehended before that has to happen. These depraved animals are our enemy. Let me repeat that. They are our enemy. Do not feel one iota of pity for them.” Later in the post, Duncan instructs readers who live in big cities to “arm yourselves” and “shoot to kill” if they find themselves in a situation where their safety or livelihood is threatened.

The safety and livelihood of all women of childbearing age is potentially being threatened, mind you.

There was violence at the Rhode Island state house. A man identified as Josh Mello waded into a pro-abortion rights rally and began yelling at the crowd. I take it he was a counter-protester. It appears there was some shoving and scuffling.

One of the demonstration’s organizers, Jennifer Rourke — a board member of The Womxn Project and candidate for a State Senate District 29 seat in Warwick — rushed over to try to defuse the situation. “This (conflict) is not what this is about,” Rourke, who is also a co-founder of the R.I. Political Cooperative, told the Globe on Saturday.

Video from the demonstration shows Rourke holding her hands up and repeatedly asking people, in English and Spanish, to move away. She asked Mello to leave, and she said he agreed.

As Mello climbed state house stairs, however, another man began punching him. Police moved in. But then they arrested another man, neither Mello nor his assailant, for unspecified reasons.

And then it got even more freaky, when Jennifer Rourke’s political opponent for the Rhode Island Senate seat,  off-duty Providence police officer Jeann Lugo (a man, I finally figured out) rushed into the crowd and began punching Rourke in the face. Lugo is now on administrative leave and has dropped out of the race for Senate. He has also deleted his Twitter account. Rourke is planning to press charges.

In response to questions from the Globe, Lugo on Saturday did not deny punching Rourke.

“As an officer that swore to protect and serve our communities, I, unfortunately, saw myself in a situation that no individual should see themselves in,” Lugo said in an email to the Globe. “I stepped in to protect someone that a group of agitators was attacking.”

The thing is, there are a number of videos in circulation of this incident. They are jumbled and hard to follow, but none indicate that Rourke was threatening anybody.

What strikes me, though, is the double standard. Police were out in force to stop violence at the pro-abortion rights protests. They expected violence. They pro-actively cleared out the Arizona protest that hadn’t yet become violent. But somehow no one ever prepares for violence when it’s the Right gathering to express political views. Even though they are a lot more likely to really be violent. Why is that? 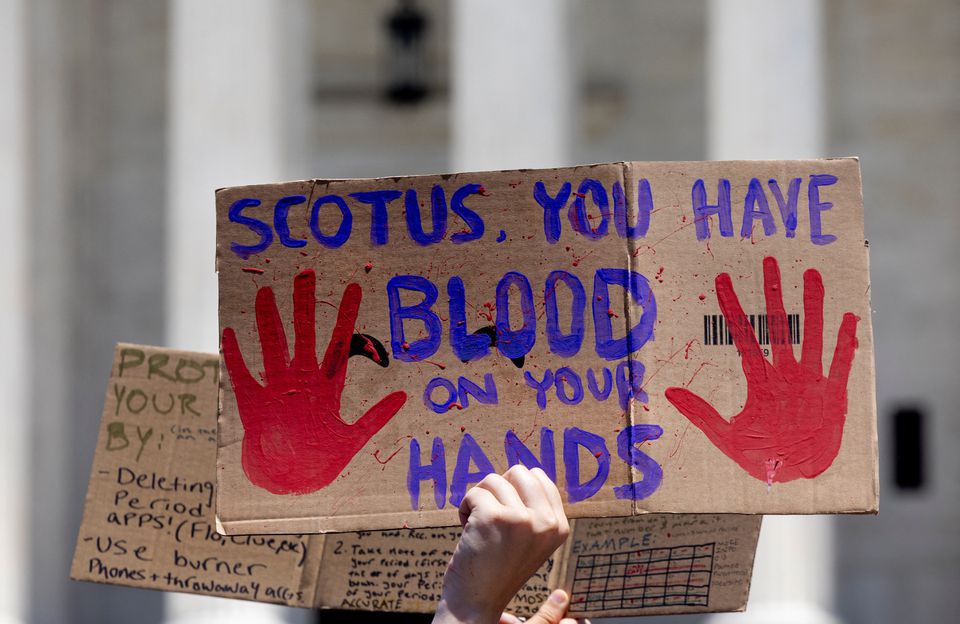