Yesterday the New York Times reported that one of Trump’s lawyers — it didn’t say which one — last June signed off on a declaration that all classified materials in Trump’s possession had been returned to the government. Somebody’s in trouble.

Here’s a sentence that’s so New York Timesy: “The existence of the signed declaration, which has not previously been reported, is a possible indication that Mr. Trump or his team were not fully forthcoming with federal investigators about the material.” Ya think?

A long article at WaPo, Trump’s secrets: How a records dispute led the FBI to search Mar-a-Lago, is worth reading. It fills in some more details. The National Archives started to nag Trump about missing documents in the spring of 2021, it says.

People familiar with those initial conversations said Trump was hesitant to return the documents, dragging his feet for months as officials grew peeved and eventually threatened to alert Congress or the Justice Department to his reticence.

This is from the Wall Street Journal:

Mr. Trump’s lawyers and representatives have said that they were in negotiations with the government when the FBI showed up and that they have complied with Justice Department requests.

One, it’s been dragging on for well over a year. Two, these were not “negotiations.” This was the government saying “You have things in your possession that should not be in your possession, and you must hand them over now.” No compliance, no negotiation.

WSJ describes Trump’s final days in the White House as chaotic, especially since Trump didn’t begin to prepare to leave until the last minute. So things were thrown in boxes haphazardly. However, much of the classified material was of a nature that it should’t have just been lying around, even in the White House, where Trump could have just thrown in it a box.

A Trump adviser said the former president’s reluctance to relinquish the records stems from his belief that many items created during his term — photos, notes, even a model of Air Force One built to show off a new paint job he had commissioned — are now his personal property, despite a law dating to the 1970s that decreed otherwise.

“He gave them what he believed was theirs,” the adviser said.

“He gets his back up every time they asked him for something,”said another Trump adviser. “He didn’t give them the documents because he didn’t want to. He doesn’t like those people. He doesn’t trust those people.”

Former chief of staff John Kelly went on to say that Trump just plain didn’t respect the classification system and thought it was stupid.

We’ve been talking about why Trump was so determined to hang on to those documents. Did he plan to sell them? Might he use them as leverage against people he didn’t like?

But the honest answer may be in that WaPo article — he didn’t want to. He just didn’t want to. Access to classified documents was one of the cool things about being POTUS, and giving them up amounted to an admission he wasn’t POTUS any more. He couldn’t move on. It’s like Miss Havisham refusing to take off her wedding gown and get rid of the moldy cake.

Matt Bai wrote something worth reading —

In Trump’s worldview, he acquired the office and the generals and the state secrets, just as he’d once acquired the Eastern Air Lines’ shuttle, and this whole idea that he was privileged to serve was a bunch of deep-state nonsense. …

… So, of course, Trump refused to leave the job until forced, and of course he held on to material that clearly belonged in public hands. When the presidency is an acquisition rather than an opportunity to serve, then everything that comes with it is rightfully yours to do with as you please.

The clock ran out and he lost the office and the swag, and he felt robbed. That was his stuff. He was hanging on to his stuff, because it was his. And let’s be honest; the perks and the swag were all he cared about. The job, not so much. I don’t believe he ever grasped that the presidency is a job. He’s never had a job, you know.

Several times in his presidency he played fast and loose with secret information, sometimes just to show off. For example, in 2017 he was too eager to share intelligence with Russian officials in the Oval Office, for no apparent reason. Who knows how much he shared with Putin in their unmonitored conversations?

David Graham at The Atlantic:

Trump is both an inveterate braggart and a terrible secret-keeper. In May 2017, the same week he fired FBI Director James Comey for refusing to protect him personally, Trump disclosed classified information (reportedly obtained from Israel) to the Russian foreign secretary and ambassador during a White House meeting. In April 2019, he posted a photo of an explosion at an Iranian facility, over the objections of intelligence officials, who worried it would undermine future American spying. Later that year, he blabbed about nuclear systems to the reporter Bob Woodward.

Woodward’s sources were surprised by Trump’s loose lips, but they shouldn’t have been. Trump most likely wasn’t sharing these things because they were national-security matters; he was sharing them because they were secrets he could share. This is, after all, a man who leaked about his own extramarital affair to the press. In any case, the U.S. intelligence community became consistently worried about sharing secret information with Trump, for fear he’d spread it, as Mark Mazzetti of The New York Times notes.

Immediately after the search, WaPo says, Trump was sure the FBI had played into his hands. He planned to use the search to rally people to his side and help him regain the White House. By the end of the week, his mood was darker. “As the week progressed, Trump grew angrier, at times screaming profanities to advisers about the FBI and how they were out to ‘get him,’ people who were in contact with him said.”

He cannot understand that this is, ultimately, not about him.

The Right is still trying to gin up outrage over the search. Now Fox is saying the FBI seized records covered by attorney-client privilege. Somehow I doubt there is any attorney-client privilege where national security is concerned. Fox also says Trump’s lawyers have asked for an independent special master to be appointed to review the documents, and the DoJ said no. I question whether there is any such person who is that “independent” but who also has the highest level of security clearance.

For more on what motivates Trump, see David Atkins, Trump Can’t Envision a Government Less Corrupt Than He Is. “His narcissism is so supreme that he cannot distinguish between personal and institutional loyalty. In his mind, every institution is as corrupt and self-serving as he is.” He doesn’t think in terms of obeying laws or following rules where the security of the nation is concerned. As far as he understands anything, the only reason the FBI would have seized those boxes is that President Biden is out to get him. He can’t grasp any other reason for anybody to do anything.

Have I mentioned lately that the man is colossally stupid? 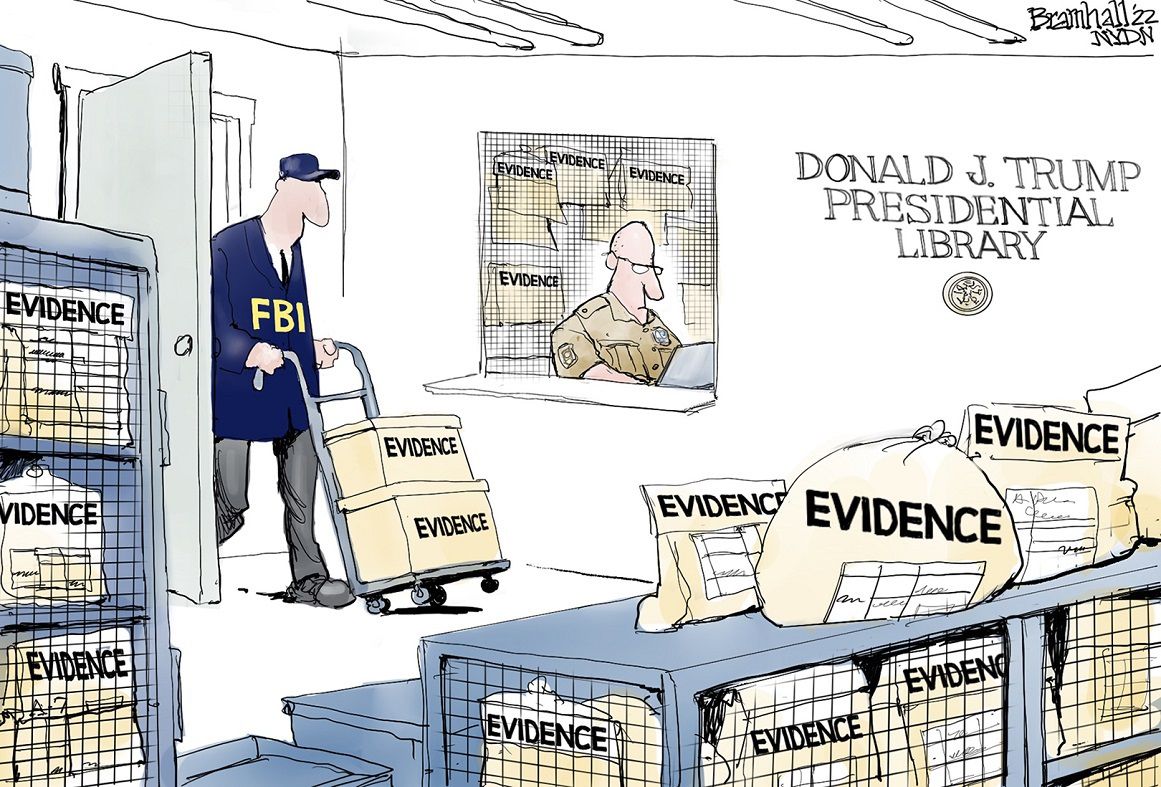