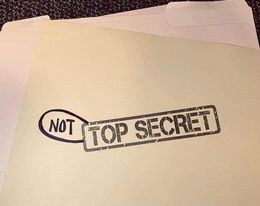 Rolling Stone has a good timeline of the whole stolen document saga, beginning on January 20, 2021, the day Trump transitioned from POTUS to FPOTUS. And at Slate, Fred Kaplan provides a clear explanation of the legal trouble Trump has gotten himself into.

Trump filed a legal motion this week, arguing that, as president, he had the right to declassify any classified documents and that his continued possession of the material was based on “executive privilege.” A judge should have no problem dismissing both arguments. First, while a president can declassify documents, there is a process for doing so; at the conclusion of the process, the special classified tabs and markings would be removed. Yet the tabs and markings are still on the documents retrieved from Mar-a-Lago. Second, mere possession, much less declassification, of some documents, such as those marked OCORN, must first be approved by the originating agency. That doesn’t seem to have been done either. Third, a president—certainly an ex-president—has no executive privilege to hold documents that properly belong to the National Archives.

Finally, mere possession of these documents is a crime under some of the statutes cited in the affidavit, whether or not they are classified.

There is much that we still don’t know. But one thing is, or at least should be, clear: Trump is in a heap of legal trouble.

In brief, the documents still had security designations and therefore were not declassified; it would still be illegal for Trump to possess them even if they had been declassified; and he has no executive privilege. He lost that at noon on January 20, 2021.

There are a number of opinion pieces today that declare there is no way Trump will not be indicted. This one by Brad Moss seems to be getting the most buzz. I assume the feds will want to conclude their assessment of the damage done to national security before that happens, or perhaps they will wait until after the midterms, although I don’t think they should have to wait until after the midterms because Trump is not a bleeping candidate for anything in the midterms.

Of course, the Right does not believe Trump will be indicted. The editorial board of the Wall Street Journal has an opinion piece up headlined “The Mar-a-Lago Affidavit: Is That All There Is?” The blurb under the headline says, “The redacted 38-pages add to the evidence that the FBI search really was all about a dispute over documents.”  The editorial completely ignores the whole threat to national security thing. Commenters to the op ed are having a fine time quoting from 2016 editorial board articles about how Hillary Clinton needs to face a reckoning.

On the right-wing Hot Air site, Alan Dershowitz is quoted as saying that there is enough evidence to indict Trump, but he probably won’t be. The blogger Allahpundit, falling back on the “Spanky did it first” defense,” then says,

The “Nixon standard” he describes is a stupid anachronism in the context of febrile modern American partisanship. As Trump himself would excitedly tell you, there’s no crime so foul that he could commit that would convince Republicans to turn against him. If the “Nixon standard” is the standard for indicting a former president, Trump is completely above the law. The “Clinton standard” is more trenchant, however. Certainly, Trump should be held to the same standard that Hillary Clinton was when the feds declined to prosecute her in 2016.

Which, I suspect, is the reasoning Merrick Garland will use when he ultimately decides not to bring charges here.

You know I’m no fan of Hillary Clinton, but there is a huge magnitude of difference between Clinton’s email issues and Trump’s deliberate keeping of stolen, highly sensitive documents in his basement. Here’s a Politifact article from August 9 that explains it. “Hillary Clinton used a private email address for exchanges with her State Department staff. In three instances, email chains included information with ambiguous classification markings,” it says. Trump was sitting on documents with the highest security designation, keeping them in a very much not secured place, and refusing to return them to the National Archives after being asked several times to do so.

Clinton did have a system for keeping clearly marked sensitive information within the State Department’s email servers that was followed most of the time. Clinton was an idiot, however, to ever mix State Department and personal business, classified or not, in a private email account. She also was an idiot to have her own lawyers, and not the State Department or some other authority, review the emails and decide what was personal and what was official, and then delete the personal stuff. But as far as anyone can tell this was all sloppiness and bad judgment more than anything else, and there is no indication that the classified information in the errant email chains was of the top secret, national-security-related level of the stuff Trump was sitting on.

But let’s be real. The reason Trump won’t be prosecuted isn’t because of “the Clinton standard,” which may or may not be apt depending on what the feds know about what was going on at Mar-a-Lago and we the general public don’t. The reason he won’t be prosecuted is because some of his most fanatic supporters would take to jihad as a result, with Trump egging them on in barely veiled terms on social media. People who were willing to hang Mike Pence to try to keep Trump in power won’t need much convincing to kill FBI agents to try to keep him out of prison. And they’re not shy about admitting it.

No, if Trump is not indicted that won’t be the reason. Or, at least, it’s the absolutely last reason for not indicting Trump. The United States cannot allow a bunch of thugs and bullies to dictate the rule of law. If that’s allowed, you might as well rename the country the United Fascist States of America. If the meatballs carry out any more acts of insurrection, let them face large numbers of National Guard. With tanks. One suspects they will soil their camo pants and surrender quickly enough.

As far as the official Republican response to the affadavit, so far there hasn’t been much of one from those in the GOP hierarchy. Immediately after its release there was much screeching about redactions. And then they read the unredacted stuff and shut up.

One does suspect they’re thinking that Trump is going to cost them the Senate, again. Between Trump fatigue and the Dobbs decision, the anticipated Red Wave doesn’t seem to be wavin’ much.