There’s a very good article about the Venezuelan migrants flown to Martha’s Vineyard, by Judd Legum at Popular Information. Legum found evidence that the migrants were lured on the plane with promises of benefits they weren’t going to get. Authorities in Massachusetts have requested a federal criminal probe of Ron DeSantis.

This weekend Trump had a rally in Ohio that sounds unhinged even by Trump standards. Greg Sargent:

Donald Trump’s weekend rally in Ohio had no shortage of dark and disturbing moments: He mocked GOP Senate nominee J.D. Vance for “kissing my ass,” called for Singapore-style executions of drug dealers and enjoyed a moment of ritualistic crowd adulation set to what sounded like a QAnon song.

But Trump also delivered a deeply serious message with real-world implications. He fully expects a GOP Congress to use its power to place him outside the reach of any and all investigations and prosecutions, now and into the future. …

… These are not idle ravings. They are better understood as a directive, as a declaration of what Trump actually does expect a GOP-controlled Congress to do for him. And you will hear this more as Trump holds rallies for other House and Senate candidates….

This was all about signaling to the GOP that they’d better protect him from prosecution, or his wackadoo cult followers will withhold their votes.

Trump gravitates toward what secures his deepest and surest hold over his supporters. He’s in a mutually reinforcing cycle of radicalization with his most ardent followers.

It also seems likely that his rapidly intensifying legal exposure and predicament are fueling this shift. The Q fantasy has always been based on belief in a corrupt and evil liberal “deep state” which will result to all manner of criminality and threats and crimes against Trump before finally being vanquished in a dramatic turning of the tables in which Trump gets his violent revenge against his enemies.

Trump and his supporters have created a dynamic in which the predictable and perhaps inevitable result of his own criminal behavior now validates their narrative about his persecution and inevitable violent triumph over his foes. It also makes Trump’s reliance on the hardcore of MAGA/QAnon supporters more of an all-or-nothing thing.

See also Will Bunch, This QAnon-flavored soundtrack to Trump, GOP’s fascist right turn should terrify you.

I suspect posting will be light this week because I now have covid and feel awful. Wish me luck with this. 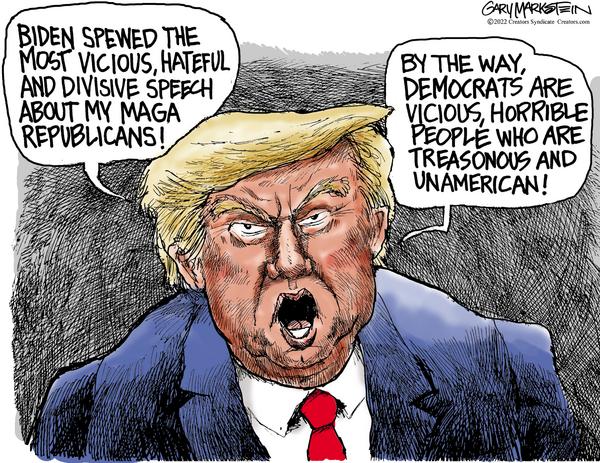