Yesterday I linked to a column by Aaron Blake, Trump’s nonsensical riff on past presidents and classified documents at the Washington Post. But what I was too slow to put together is that the nonsensical riff amounted to a confession that he took the government documents and kept them on purpose.

Seth Meyers picked up on it, too.

On Monday’s edition of CNN’s “The Situation Room,” legal analyst Elliot Williams broke down the controversial argument Trump made at his Mesa, Arizona rally in defense of hoarding classified documents at his Florida country club — an argument his legal team has so far declined to make when under oath in court.

“I had a small number of boxes in storage at Mar-a-Lago guarded by Secret Service and my people and everybody,” said Trump in the clip played on CNN. “I mean, it’s safe. There is no crime, there is no crime. It’s not a crime. And they should give me immediately back everything that they’ve taken from me because it’s mine, it’s mine.”

“So when you listen to that, does it make the attempt to blame that government agency look even more absurd?” asked anchor Wolf Blitzer.

“It does,” said Williams. “That is what prosecutors would call a confession for a crime, and the mere fact that you think it’s not a crime doesn’t change that fact. Look, Wolf, I can burn your house down and if I burn your house down and say, you know what, I didn’t commit arson, I was just playing with fire at Wolf’s house, it’s still an act of arson. Whatever, we don’t even need to explain that point.”

This is what we call a summation exhibit.
Proof from the defendant’s own mouth. And on video. https://t.co/896a89GJdj

Aaron Blake explained the “socks decision” Trump keeps talking about, which was about some recordings of President Clinton’s.

And they weren’t classified; they were tapes of conversations Clinton had with an author who was working on the president’s oral history.

A court decided that Clinton could keep the recordings, but of course the facts of this case in no way resemble what Trump did.

In 1994, the Associated Press reported that items from Bush’s personal life were being sorted in College Station, Tex., “in the old Chimney Hill Bowl” and “in what used to be the kitchen of a Chinese restaurant.”

It’s not at all clear what Trump was referring to by broken doors and windows. But the idea that there was “no security” is flat wrong. As the same story noted: “Uniformed guards patrol the premises. There are closed-circuit television monitors and sophisticated electronic detectors along walls and doors. Some printed material is classified and will remain so for years; it is open only to those with top-secret clearances.”

In other words, NARA built a secure facility in what used to be a Chinese restaurant/bowling alley.

I am so confused. My dad enjoyed a good Chinese meal and enjoyed the challenge of 7 10 split. What the heck is up with you? https://t.co/LT1jET2kor

Trump keeps bringing up Barack Obama also, but in every case the records he claims past presidents “took” were in fact in the custody of the National Archives at all times. And still are. They were never in the ex-presidents’ custody, even though NARA set up facilities near where the ex-presidents were living so that records they might want to consult were convenient to them. If Trump had asked I’m sure NARA would have done the same for him.

At The Atlantic, Franklin Foer writes that Merrick Garland will indict Trump; it’s just a matter of when. This and similar arguments I’ve seen recently boil down to the same primary point — Trump isn’t giving Garland any choice in the matter. Going around telling crowds of people that the stolen documents are “mine” is pretty much asking to be prosecuted.

The story is that Garland is a cautious and modest man who would rather swallow live frogs than indict a former president, especially one with a violent and cultish following. He knows that would put him at the center of a nuclear media firestorm at least. It’s a shame nobody could slam some criminal indictments on Trump before the primaries. But maybe it won’t be long after. If it isn’t Merrick Garland, maybe it will be Fani Willis in Georgia or — less likely, I suspect — Manhattan DA Alvin L. Bragg. 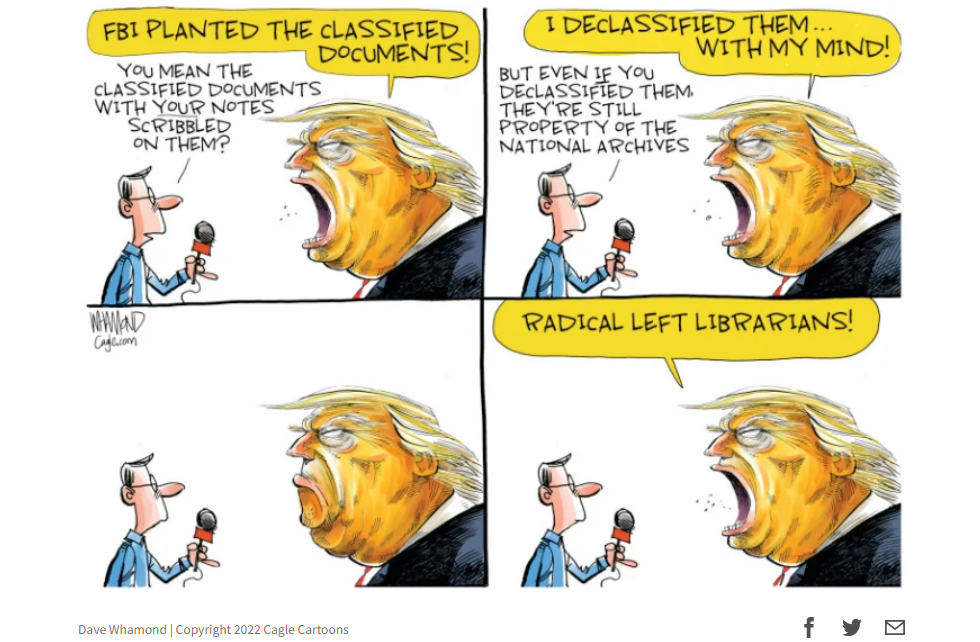