I am still avoiding any news about election polls and midterm predictions. I don’t want to know. I may not watch returns election night. These races are so close it may be a couple of days before we know anything. I need to catch up on other things, anyway.

First, I want to note the recent passing of Jerry Lee Lewis. Rock on, Killer. It has been truly said of Jerry Lee that even his wrong notes were right.

The shooter, Orlando Harris, was 19 and shot by police at the scene. He died in a hospital later. His parents had been worried about his moods and behavior, but Missouri has no red flag laws, of course. So police couldn’t take his assault rifle.

The family of the St. Louis high school mass shooter asked police for help removing the AR-15-style assault rifle from him nine days before the rampage — but it somehow ended up back in his hands, police said.

On Oct. 15, police responded to a domestic disturbance call at 19-year-old Orlando Harris’ home, where his mother found the weapon and wanted it removed, the St. Louis Post-Dispatch reported.

Officers determined Harris was legally permitted to have the gun, but transferred it to a third party so it would not remain on the premises, officials said late Wednesday.

Harris had failed an FBI background check, so he bought the gun from a private seller, which apparently was legal.

The teenager accused of shooting a teacher and a student dead at a school in St. Louis earlier this week had been blocked from buying a gun from a licensed dealer due to an FBI background check, authorities said. Orlando Harris, 19, then purchased the AR-15-style rifle used in the attack from a private seller, according to police, with no law in place which could have prevented such a sale. The revelation comes after it emerged that Harris’ family had asked police to help remove the rifle when it was discovered in the family home before the attack, but Harris was somehow able to get it back after it had been given to a third party known to the family.

Missouri doesn’t require background checks for private sales. I haven’t heard any explanation of how Harris got the gun back. Whoever had it and gave it back to him might be in trouble in a sane place, but probably not in Missouri. The right to possess guns overrides everything else around here.

Harris had a AR-15-style rifle, over 600 rounds of ammunition and more than a dozen high-capacity magazines. Again, he may have acquired all that legally, in spite of his failed background check.

Predictably, when alleged governor Mike Parson finally addressed the incident, he said that these things happen and there’s nothing to be done about it. He originally claimed that state law allows for guns to be removed from people with mental health problems, which Harris had, but that was not true.

“People have mental health issues, you can take their weapons on that,” Parson incorrectly said. “That’s part of the bill that was passed and I think you can go in and read that.”

5 On Your Side has asked Parson’s office to show evidence to support his claims. His spokesperson has not responded to that question.

According to a link Parson’s office sent in a press release, the Second Amendment Preservation Act “declares…laws…,” and “court orders… invalid…including those that…prohibit the possession, ownership, use, or transfer of a firearm, or the confiscation of one.”

Law enforcement also visited the shooter’s home on three other occasions this year.

According to police reports obtained by 5 On Your Side’s Christine Byers, a crisis response unit visited the home in June — the shooter attempted suicide on July 6 and made a threat with a violent weapon on July 26 — and officers visited the home for a domestic disturbance on October 15.

On at least three of those visits, police could have theoretically confiscated any weapons in his possession at the time if state law allowed it.

Police said all the red flags were there. The red flag laws were not.

“The State of Missouri does not have a red flag law,” Officer Wall said. “That means SLMPD officers did not have clear authority to temporarily seize the rifle when they responded to the suspect’s home when called by the suspect’s mother on 10/15/22.”

Still, Parson claimed gun safety laws adopted in red states like Indiana and Florida wouldn’t have made any difference in Missouri.

“The red flag laws have never been in place in Missouri,” Parson said. “You got a criminal that committed a criminal act, you know, and all the laws in the world are not going to stop those things.”

The man is absolutely and utterly worthless, I tell you.

Do read Will Bunch’s Philadelphia Inquirer column, Why St. Louis hero teacher Jean Kuczka did what 376 Uvalde cops couldn’t. Jean Kuczka, 61, was a physical education teacher at the school. She was also a mother of five, grandmother of six, and a national championship field-hockey player. She died because she put herself in between the shooter and her students.

The student who died was named Alexzandria Bell. She didn’t quite make it to her 16th birthday. I understand one of the students who will survive is an art student who may lose the use of his hands.

Missouri gun laws are, basically, do what you want. No permit, no restrictions. There is no provision for taking guns from anyone, including domestic abusers and people who are mentally incapacitated. 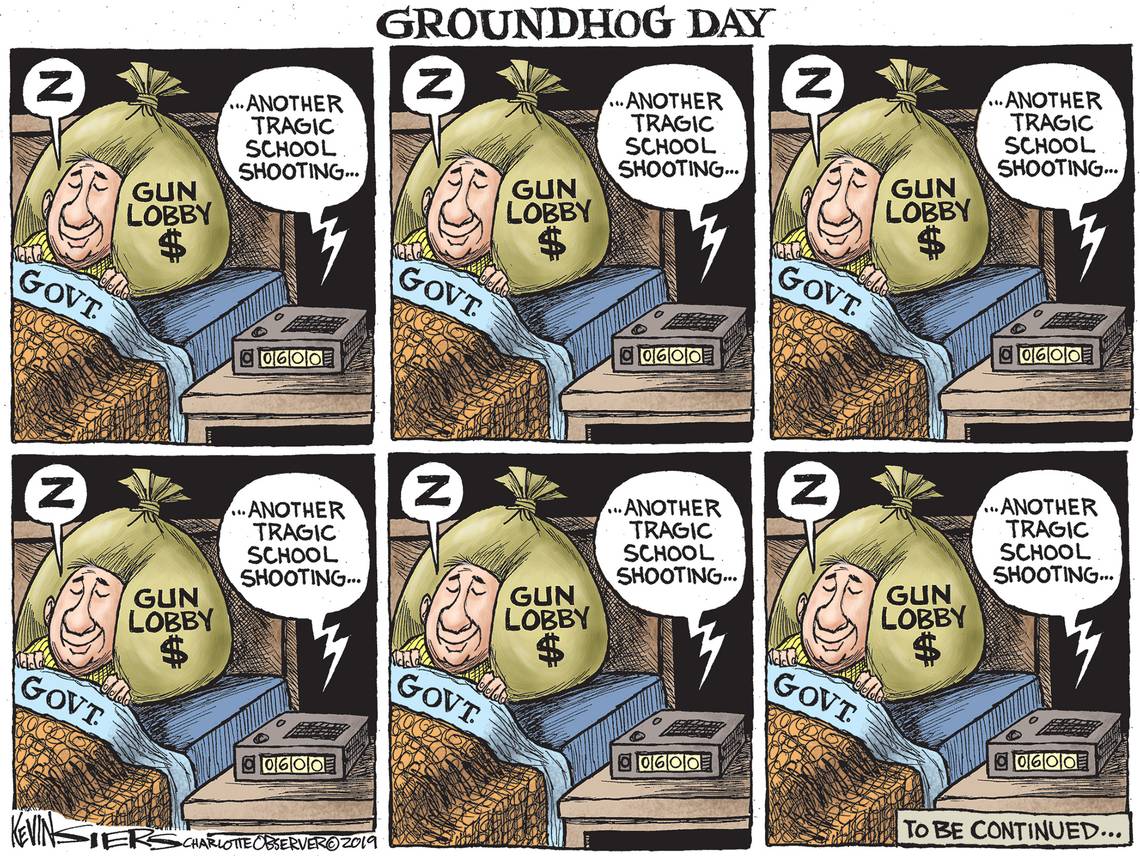