What a week for Donald Trump. House Democrats finally got their hands on his tax returns. Judge Aileen Cannon has been ordered by the 11th Circuit to dismiss the documents case in her court and put an end to the “special master” delay tactic. The two top Oath Keeper guys were found guilty of seditious conspiracy. It looks like testimony in the tax fraud trial in Manhattan is about to wrap up. The dinner with Ye and Nick Fuentes is still making headlines because they are all walking freak shows who won’t shut up. And there’s this, which has been under-covered —

Pat Cipollone, the Trump White House counsel, and his deputy, Patrick Philbin, appeared in September before the grand jury in Washington, DC, as part of the Justice Department probe, which is now being overseen by newly appointed special counsel Jack Smith.

Cipollone and Philbin declined to answer some questions at that time, citing Trump’s claims of executive and attorney-client privilege.

And to state the obvious, DOJ’s decision to fight Cipollone & Philbin’s executive privilege claims shows they are moving like a freight train directly at Donald Trump.

The Republican Party probably hasn’t hit bottom yet, but it’s getting closer. The Ye – Alex Jones interview, in which Ye revealed himself to be a Hitler fanboy, ought to be a huge embarrassment for the entire right-wing media-political infrastructure. Tucker Carlson made Ye a right-wing hero. The GOP had turned Ye into some kind of poster boy for Black People Who Support Trump. (The sub-context being see? we aren’t racists!) That’s all blowing up in their faces now. Jewish groups are demanding that the GOP cut all ties with Ye, which I assume they will do. They need Jewish votes more than they need the 6.2 Black Voters who might have changed parties because they are Ye fans.

Ye himself is, obviously, a massively screwed up person who needs to be under psychiatric supervision a lot more than he needs to be in a media spotlight. I hope he gets the help he needs now that he’s probably about to become persona non grata in right-wing media. But unless he is psychotic being screwed up mentally is no excuse for anti-Semitism or Holocaust denial.

At The Atlantic, Ron Brownstein says the Republican party may be at a cross roads regarding its extremist supporters. Many GOP politicians were slow to respond to the Ye-Fuentes-Trump debacle. Now some of them seem to want to re-erect old barriers between the far-right fringe and the party mainstream, but others are reluctant. Without the White and Christian nationalists, who else is going to vote for them?

Elizabeth Neumann, a former assistant secretary at the Department of Homeland Security under Trump who focused on domestic extremism, told me she believes the backlash—however belated—combined with the GOP’s disappointing performance in last month’s midterm elections, could mark a turning point. “I think we are going to be playing footsie with fascism and authoritarianism and extremism for a while,” because it helped Trump win the presidency in 2016 and sustain his support thereafter, she said. But, she added, after several years of feeling “very pessimistic” about the prospect of weakening those movements, “this is the first time I’ve felt there might be some light at the end of the tunnel.”

Yet others remain unconvinced that the GOP is ready to fundamentally break with Trump or ostracize the coalition’s overtly racist, homophobic, and anti-Semitic white supremacists and Christian nationalists. “I think what we are looking at is the entrenchment of extremism, and that’s what is so worrisome,” Jonathan Greenblatt, the CEO of the Anti-Defamation League, told me.

If anything, extremist groups could gain momentum in the coming months. Musk’s proposed mass amnesty for banned Twitter accounts would provide “a tremendous amount of oxygen to extremists on the radical right” and allow those groups to push back much harder against any Republican elected officials resisting their presence in the party, Michael Edison Hayden of the Southern Poverty Law Center’s Intelligence Project told me. If Musk opens the door to extremist organizing on Twitter, Hayden said, the white-nationalist presence in the GOP coalition will become “potentially irreversible in the short term.”

I suspect Greenblatt and Hayden are calling this right. The next couple of years are going to be interesting.

Jennifer Rubin also has a good column, The MAGA cult should face facts: America will never be theirs ‘again.’

Right-wing media commentators and MAGA politicians have one thing right: The cultural tide of pluralism, secularism and feminism has washed away their imagined reactionary paradise of a White Christian America. Unfortunately, they fail to realize this trend is irreversible.

Republicans have been invested in the “culture war” for decades now. And they’re losing. They’re stuck with defending many positions that were winners for them in the past but aren’t any more — opposition to legal abortion, opposition to same-sex marriage, opposition to “virtually anything that smacks of racial justice,” Rubin says. As a result, they are at odds with the overwhelming majority of Americans on most social issues. And that’s not going to change.

But they are stuck in dependency with the White Christian Nationalists and the various other fringe crazies who like to pretend they are freedom fighters and warriors for the revolution.

(Their real problem is that they are leading meaningless lives and are not nearly as privileged and admired as they think they ought to be. One of the best things I’ve read this week is “Why Did the Oath Keepers Do It?” by Tom Nichols at The Atlantic, which I can’t get to today without starting up another subscription. Which I don’t want to do. But give it a try and see if they’ll let you read it.)

In the meantime, what might really shake up the political landscape is if Trump finally is tried and convicted of something, and that’s looking more possible all the time. 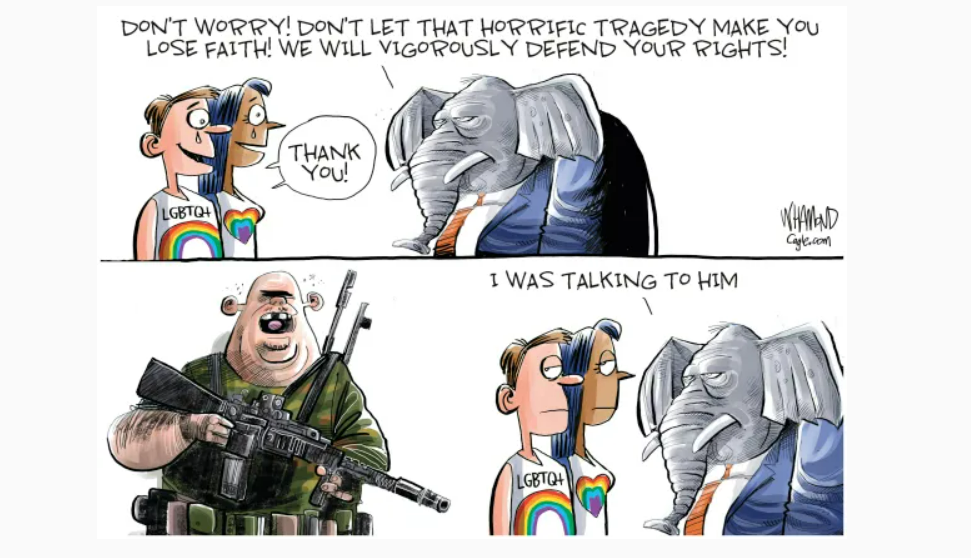