The House passed the Defense of Marriage Act, again.

The House had already passed an earlier version of the Respect for Marriage Act in July, but the Senate delayed its vote on the bill until after the midterm elections. Late last month, the Senate passed the bill with a bipartisan amendment to allay some Republicans’ concerns about religious liberty. The amended bill passed the Senate in a 61-36 vote, with 12 Republican senators joining Democrats in favor of it.

In a 258-169 vote, the House on Thursday passed the bill with the amendment, which clarifies that the federal government would not be authorized to recognize polygamous marriages and confirms that nonprofit religious organizations would not be required to provide “any services, facilities, or goods for the solemnization or celebration of a marriage.” Thirty-nine Republicans joined all Democrats in supporting the measure.

Weirdly, 47 House Republicans voted for the original bill, but only 39 for the amended bill. So they added an amendment to make it more conservative friendly and lost eight Republican votes. The hardline conservative caucus in the House pressured members to vote against it, I understand. I don’t have a list of which Republicans voted for the final bill, but I do know the list includes Liz Cheney and Adam Kinzinger. No surprise there. Now President Biden can sign it, and it’s law.

In other news, Brittney Griner has been freed, exchanged for Russian arms dealer Viktor Bout. But Paul Whelan is still in a Russian prison.

Yesterday the Supreme Court heard oral arguments in Moore v. Harper, the case the case that asks whether democracy is protected by the Constitution. Or, it deals with partisan gerrymandering in North Carolina and a far-right legal idea known as the independent state legislature (ISL) theory. ISL theory claims that only state legislatures have the authority to govern elections in their states, and what the legislatures decide cannot be vetoed by governors or state supreme courts. SCOTUS endorsement of ISL could potentially lead to state legislatures overturning elections if they don’t like the results.

It sounds as if the lawyers challenging ISL got the upper hand yesterday. Dahlia Lithwick:

The fake constitutional history supporting this nonexistent constitutional doctrine is so lacking in substance that it was almost impossible to believe that the high court could spend three hours taking it seriously.

The results were almost beyond parody: At one point, the North Carolina GOP legislature’s lawyer, David Thompson, in court to argue that the power to set election procedures is unreviewable by state courts, said that he would soon prove that this was the express intent of virtually all of the colonies from the jump. Justice Sonia Sotomayor mustered a terse response: “Yes if you rewrite history, it’s very easy to do …”

This is a theory with big consequences. It would say that if a legislature engages in the most extreme forms of gerrymandering, there is no state constitutional remedy even if the courts think that that’s a violation of the constitution. It would say that legislators could enact all manner of restrictions on voting, get rid of all kinds of voter protections that the state constitution in fact prohibits. It might allow the legislatures to insert themselves and to give themselves a role in the certification of elections and the way election results are calculated. So in all these ways, I think what might strike a person is that this is a proposal that gets rid of the normal checks and balances on the way big governmental decisions are made in this country.

As the argument unfolded, three distinct camps emerged, with Jackson, Kagan, and Sotomayor opposed to the whole goofy theory; Alito, Gorsuch, and Thomas thrilling at the prospect of authoritarian rule; and the Chief, Barrett, and Kavanaugh wishing there was some way to let Republicans gerrymander at will without turning North Carolina elections into North Korean elections.

I liked this part.

Neal Katyal went right at the conservatives with receipts — straight up calling his shot, announcing that he’d been “waiting for this case” so he could unload his can of originalism on Justice Thomas — quoting back their own opinions from every time the shoe was on the other foot, prompting a series of blubbering exchanges from the frustrated justices. His exchange with Gorsuch set the tone. The justice asked Katyal for “one example” of the Court employing Katyal’s theory. He cited a 19th century example. “*grumble* Put that aside!” He cited another. Gorsuch rants and raves trying to figure out why he hadn’t researched this point.

And I liked this part:

But amid all the twists and turns from Justice Kagan’s incisive questioning (not-too-far-off translation by Professor Leah Litman: “So this theory could end our democracy. Response?“) to Justice Gorsuch arguing that the independent legislature theory is how pre-Civil War Virginia was a bulwark against the 3/5ths clause (or some nonsense), Justice Jackson delivered the most devastating bodyblow (no transcript… so this may be inexact):

I guess I don’t understand how you can cut the state constitution out of the equation when it is giving the state legislature authority to exercise the legislative power.

After three hours of oral arguments at the Supreme Court on Wednesday, only one thing is certain: If the justices want to blow up federal elections, they will have nothing to hide behind—not history, not logic, and certainly not the Constitution. The three lawyers defending democracy methodically dismantled the “independent state legislature” theory from every conceivable angle, debunking each myth, misreading, and misrepresentation deployed to prop it up. They bested the conservative justices who tried to corner them, identifying faulty reasoning and bogus history with devastating precision.

Those of us who’ve been ringing the alarm over this dangerous theory—and who’ve been disgusted by the campaign to drag it from the far-right fringe all the way to the Supreme Court—can take solace knowing that these capable lawyers exposed it as an utter fraud.

We can’t celebrate yet, of course, because any time the future of democracy depends on the whims of Kavanaugh, Barrett, and Roberts — well, it ain’t good. 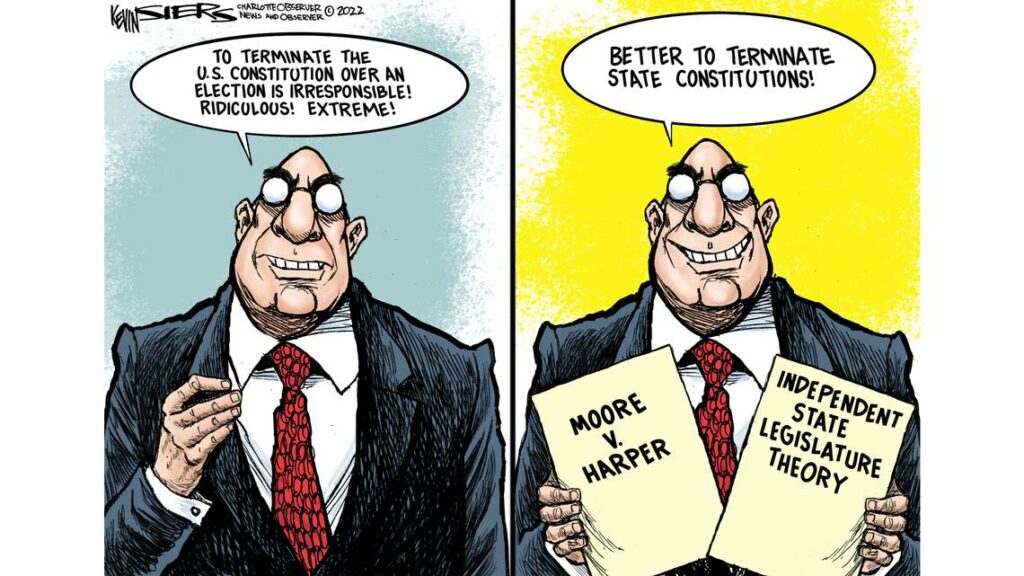