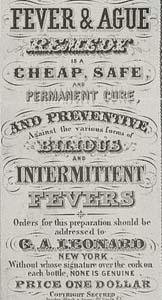 Could an epidemic of second thoughts be spreading on the Right?

If so, it’s spreading slowly. Righties are still righties, and many’s the winger who will insist he still feels fine even as flesh is consumed and internal organs are shutting down. But reality can be catching, and nobody avoids it forever.

In Salon, Joe Conason reports that some righties are grudgingly acknowleding that, maybe, um, we need some government regulation after all.

On the day that avian flu reaches these shores, even the most conservative Americans may begin to understand why effective government and global cooperation are as important as “free markets” and national sovereignty. With millions of lives at stake, they may well wish that we had spent more to bolster public health agencies at all levels — including the United Nations — instead of entertaining the simple-minded demagogy of the right for the past two decades.

Indeed, the pandemic threat is already exposing the limits of “free market” rhetoric among Washington’s right-wing think tanks, which have remarkably little to say about the subject that now preoccupies officials and experts around the world. …

…After many years of undermining global and national efforts to combat the HIV/AIDS pandemic, organs of Republican propaganda like Heritage suddenly consider public health to be a pressing concern of the federal government, right next to national defense on the list of priorities. Conservatives tend to change their attitudes quickly when their own lives and families might be endangered.

Conason reminds us that another repository of conservative “thinking,” the Cato Institute, in the pre-Katrina past called for the abolishment of FEMA — “presumably because everyone should depend on free-market solutions in case of an earthquake or hurricane” — and wanted the U.S. to stop paying dues to the U.N., thereby defunding the World Health Organization.

“The withdrawal of American participation and support from world organizations has always been a matter of principle for the Republican right,” Conason says, “although conservative ideology has yet to explain how we can close our borders to bird-borne disease.”

“The Cato attitude toward bird flu is much like the libertarian solution to global warming: If the ‘free market’ can’t solve the problem, let’s pretend it isn’t happening,” Conason writes. But the free market is not cooking up the stockpiles of vaccines and Tamiflu we’re likely going to need.

(Republican problem-solving amounts to denying there’s a problem until it bites their butts. Poverty, jobs, environment, health care, you name it — every time, Republicans will insist there is no problem until the crisis actually gets in their faces and threatens to hurt them in the next election. Then, of course, they will blame the problem on Democrats. On the other hand, Republicans are prone to manufacturing crises where none exist in order to enact some policy they know won’t sit well with the public.

Democrats on the whole will recognize problems shaping up down the road, although their solutions may or may not work as promised. However, I have to think back quite a while to remember a time when Democrats were in a position to enact much of anything that wasn’t compromised to death by Republicans before it became law. But if a Democratic remedy misfires, Republicans exploit the failure to expound their anti-government theories, never mind that the problem would not have evaporated had government not responded to it. )

Reality is settling over the GOP like a bad hangover. At the Washington Post, Shailagh Murray writes that some in the GOP regret they overindulged in pork when they wrote the highway bill.

The highway bill seemed like such a good idea when it sailed through Congress this summer. But now Republicans who assembled the record spending package are suffering buyer’s remorse.

The $286 billion legislation was stuffed with 6,000 pet projects for lawmakers’ districts, including what critics denounce as a $223 million “Bridge to Nowhere” that would replace a 7-minute ferry ride in a sparsely populated area of Alaska. Usually members of Congress cannot wait to rush home and brag about such bounty — a staggering number of parking lots, bus depots, bike paths and new interchanges for just about every congressional district in the country that added $24 billion to the overall cost of maintaining the nation’s highways and bridges in the coming years.

But with spiraling war and hurricane recovery costs, the pork-laden bill has become a political albatross for Republicans, who have been promising since President Bush took office to get rid of wasteful spending.

So why couldn’t they see this coming? Did the war thing just slip their minds? Did a ouija board tell them not to worry about natural disasters? Of course, part of the problem is that there used to be presidents who took the governing thing seriously and who would have refused to sign the bill. Murray continues,

President Ronald Reagan once vetoed a highway bill because it contained 152 pet projects. Despite the pork inflation, Bush had no complaints about the current package when he signed it on Aug. 10. “This bill upgrades our transportation infrastructure,” he declared. “And it accomplishes goals in a fiscally responsible way.”

Junior wouldn’t recognize fiscal responsibility if it bit his butt.

That was before Katrina devastated New Orleans and the Mississippi Gulf Coast, leaving tens of thousands homeless and requiring billions of dollars in unanticipated rebuilding costs. Trying to live within a tight budget, Republican leaders in the House and the Senate are in the process of pushing through politically difficult cuts in Medicaid, Medicare, food stamps, farm subsidies and student loans.

Making sure the poor and disadvantaged make all the sacrifices–that’s the Republican way. And since entrenched poverty so excacerbated the damage of Katrina, it’s so sensible to make the problems of poverty even more intractable. The Guardian observes,

If the budget cuts passed by the US senate on Thursday are anything to go by, the whole thing will end in tears. Republicans – disgracefully – targeted most of the cuts on the elderly and the poor through restructuring (ie cutting) some Medicare and Medicaid programmes. Worst of all, part of the cuts originally aimed (creditably) at cutting America’s ludicrously high agriculture subsidies was amended so the brunt would be taken by chopping $844m from food stamps for the poor rather than from farm subsidies. Meanwhile, Republicans are hoping to pass yet more tax cuts for the wealthy. An administration that can tackle a serious budget problem in this way deserves all that may be coming to it.

The Republicans may hope to pass yet more tax cuts for the wealthy, but there are signs the soak-the-poor crowd may be losing their edge there, too. Robert Kuttner writes in the Boston Globe,

AFTER HIS reelection, President Bush set two top domestic priorities — privatization of Social Security, and ”reform” of the tax system. Privatization ran into a wall of opposition once the public grasped that the price would be a big cut in guaranteed retirement checks.

On Tuesday, Bush’s blue-ribbon commission on tax reform issued its recommendations, and they are hitting with a similar, resounding thud. The political right wanted a flat tax, a consumption tax, or a national sales or value-added tax in place of the progressive income tax. Not only did the commission fail to support any of these, but it took on one sacred cow — capping the mortgage interest deduction that would raise taxes on the upper middle class. … it was far from what the drown-the-government crowd wanted, and one more sign that Bush is losing control of the agenda.

Damn those economists. They actually check their math.

And here’s the biggest jaw-dropper of the day: Jim VandeHei writes in WaPo that

President Bush has ordered White House staff to attend mandatory briefings beginning next week on ethical behavior and the handling of classified material after the indictment last week of a senior administration official in the CIA leak probe.

Bush? Ethics? The Apocalypse is at hand, I tell you …