Resolve is one of President Bush’s favorite words. You can choose any of his speeches on the war on terror, or Iraq, and you’ll find that the transcript is larded with the R word. 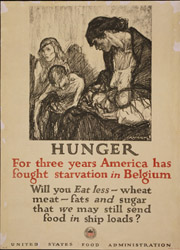 I’ve come to discuss an issue that’s really important, and that is victory in the war on terror. And that war started on September the 11th, 2001, when our nation awoke to a sudden attack.

Like generations before us, we have accepted new responsibilities. We’re confronting dangers with new resolve. We’re taking the fight to those who attacked us and to those who share their murderous vision for future attacks.

We will fight this war without wavering, and we’ll prevail.

But what the hell does “confronting dangers with new resolve” mean? What has actually been asked of us? With the exception of the sacrifices made by our soldiers and Marines … nothing. We go on with our lives just as before. We are not buying liberty bonds, growing victory gardens, knitting socks or rolling bandages for the troops. As illustrated by the World War I-era posters, in past wars citizens were asked to at least give up some extravagances for the war. Today the president and the Republicans in Congress won’t even consider raising taxes to pay for their war. Instead, they’ll shift the burden to the future. Our children will thank them, Im sure.

So what is Bush asking of us, except to trust him? 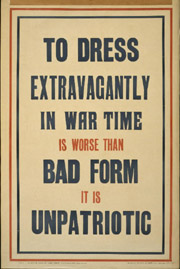 Is that what we’re supposed to be “resolved” about?

All over the Right Blogosphere today the righties argue that Bush must be allowed unprecedented presidential powers because we are fighting terrorists. And terrorists are scary. They killed people on 9/11. They might kill more people, like me. I’ll gladly trade some civil liberties for safety.

In today’s Boston Globe, H.D.S. Greenway writes that fear is distorting our judgment.

I have no doubt that one day the Bush administration’s curtailment of civil liberties, especially the torture of prisoners, will be looked back on as a national shame. I never would have thought I would live to see the day when the president of the United States would threaten to veto a bill in Congress to ban torture, or when the vice president would spend his days lobbying Congress in favor of torture. That little shop of horrors, the vice president’s office, seems to be the place where fear regularly gains ascendancy over good judgment.

The Bush administration’s predilection to torture was clearly a result of mind-clouding fear caused by the greatest terrorist attack in history on Sept. 11th, 2001. The same can be said of the excesses of the Patriot Act, and, too, the decision to use the National Security Agency to spy on American citizens without benefit of warrant as required by the Foreign Intelligence Surveillance Act.

The Bush administration has shamelessly used fear to get its way. Both the president and vice president have tried to picture a withdrawal from Iraq as resulting in an Al Qaeda takeover of Iraq, and an Al Qaeda-led Caliphate stretching across the Muslim world. In reality al Qaeda hasn’t the remotest chance of taking over Iraq, not with 80 percent of the population either Kurdish or Shi’ite, and a timely end to American occupation might sooner lead to an Iraqi-Sunni disenchantment with foreign terrorists.

Today, righties are frantically patching together byzantine legal arguments in favor of trusting Bush. In every case, when you read deeply, you see their concern is not for the integrity of the Constitution, but the integrity of their skins. Here’s an example; keep reading to the conclusion —

I’m just guessing here, but I suspect that we have technology in place that allows us to begin intercepting phone calls within a matter of minutes after we learn of a phone number being used by an al Qaeda operative overseas. My guess is that there is a system into which our military can plug a new phone number, and begin receiving intercepts almost immediately. I hope so, anyway; and I’m guessing that the disclosure of this system to al Qaeda is one of the reasons why President Bush is so unhappy with the New York Times. If we do have such a technology, it certainly would help to explain the remarkable fact that the terrorists haven’t executed a successful attack on our soil since September 2001. And the disclosure of such a system, by leaking Democrats in the federal bureaucracy and the New York Times, makes it more likely, by an unknowable percentage, that al Qaeda and other terrrorist organizations will launch successful attacks in the future.

Translation: I don’t know what Bush is doing, but I want him to keep doing it to protect me from the terrorists.

This is not “resolve,” people. This is cowardice. This is being a herd of frightened beasts stampeding off a cliff.

My dictionary says resolve means “Unwavering firmness of character, action, or will.” I say that real resolve is not letting fear gut the Constitution.

Last June Lance Mannion wrote, “[t]hat’s why the Right hates the Left these days. We aren’t as afraid as they are. They hate us for our freedom from fear.” And now the righties are waxing hysterical because the jihadists are here! These little niceties about warrants and laws are a luxury we don’t have!

To which I say, first, no one is saying that we shouldn’t conduct surveillance on suspected terrorists. But the Bush Administration has yet to explain (to anyone’s satisfaction but a terrorized rightie’s) why it bypassed FISA, or if there was a problem with FISA why it didn’t go to Congress to make new provisions for oversight. So the argument that insisting on these constitutional niceties will make us more vulnerable to terrorist attacks just doesn’t wash. We are not choosing between safety and liberty; we are choosing between tyranny and liberty.

But what if, in some remote stretch of possibility, putting some limits on The Emperor Bush actually did increase risk of terrorist attack? I do not believe this is true, but let’s pretend. Isn’t standing on principle, even in the face of danger, the very essence of resolve? Shouldn’t we be facing terrorism with “unwavering firmness of character, action, or will” intead of running to Big Brother for protection?