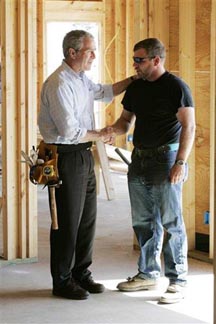 I want to thank alert reader Jim Murphy for sending this photo. What a hoot. Does the Weenie think he’s really fooling anybody?

This photo also made me think about something Sidney Blumenthal wrote in the Guardian article I discussed in the last post. “In a recently published hagiography on the theme of Bush-as-Prince-Hal, Rebel-in-Chief, written by the rightwing pundit Fred Barnes, Bush explained to him that his job is to ‘stay out of minutiae, keep the big picture in mind,'” Blumenthal writes.

So why all the photo ops that accomplish nothing but PR for Bush? What “big picture” does Bush have in mind with the toolbelt?

Years ago I heard some Republican pundit say that the difference between presidents Carter and Reagan was that Carter got bogged down in the details of operating the ship, but Reagan stayed at the wheel and steered. Well, our Dubya acts as if he’s just a passenger on a luxury cruise, and he spends most of his time rolling dice in the ship casino.

Recently Margeret Carlson wrote about the United Arab Emirates port deal [update: which may no longer be an issue, as the UAE is divesting itself of US holdings]:

George W. Bush believes in delegating, and delegate he did, to the Committee on Foreign Investment in the United States, a multiagency body created in 1975 to assess the security risks when foreigners want to invest in this country. The commission has turned down one deal out of 1,500. …

… The commission is supposed to buck decisions of this magnitude up to the president for final review. That didn’t happen here, but the president doesn’t mind. He wouldn’t have done things differently if he had been consulted.

But the decision alarmed just about everyone else, including Bush’s most loyal lieutenants. Bush has always boasted that his steely judgment is what we want in a crisis, even though it failed him when confronted with an intelligence report headed, “Osama bin Laden Promises to Strike Inside U.S.” …

…Republican Senator Lindsey Graham came out against the sale, and Tom DeLay, the former majority leader, warned the president that he had made a “huge mistake” that Congress would overturn.

Bush sees this as just another one of those details that a big-picture CEO, who prides himself on an empty in-box, isn’t supposed to trouble himself with.

It’s like the detail of whether he was cutting back on funding for alternative energies at the moment he was announcing in his State of the Union speech that he was doing the opposite. The wind- and solar-power lab in Colorado where the president spoke two days ago had to hastily rehire 32 researchers fired because of Bush budget cuts, so as not to embarrass the president who’d come to speak about getting over our “addiction to oil.”

Can He Mean Chertoff?

He calls the lack of money to back up his proposal a “mixed message.” Others might see it as hypocrisy or worse. Alternative energy is going to get as much traction in Bush land as the mission to Mars he announced in his 2004 State of the Union address.

To Bush, this is an instance where the big picture is concern for an ally and global trade trumps other things. Besides, he says, the Department of Homeland Security will be riding herd on the Dubai crowd.

Can he mean Homeland Security Secretary Michael Chertoff, the so-called smart one raked over the coals for his disgraceful handling of Katrina by Republican Senator Susan Collins last week, the one who couldn’t do his job because of Brownie — or was it the other way around?

There is no professional who knows what Chertoff is doing in charge of homeland security. The department Bush built from scratch is a disgrace, largely because to Bush all civil servants are bureaucrats and the government a pinata to be hit until all the goodies are disgorged.

There’s a distinction between seeing the big picture and being totally clueless, but this distinction seems to elude the President. He acts less like a CEO than an dim-witted aristocrat who needs a body servant to tie his shoes.

Bush has no idea what a President does, but with the right props and lighting he can look as if he’s doing a heck of a job.