Ran into that quote this morning. It picked me up.

On to the news: Righties were prompted by the WaPo article on the “angry left” to spend much of the weekend congratulating themselves on how un-angry they are compared to those unhinged lefties. Yes, they’re deluded. I know. But that’s why I had to laugh at a headline in today’s WaPo:

“Anger at Bush May Hurt GOP At Polls”

In the article, Charles Babington writes,

Intense and widespread opposition to President Bush is likely to be a sharp spur driving voters to the polls in this fall’s midterm elections, according to strategists in both parties, a phenomenon that could give Democrats a turnout advantage over Republicans for the first time in recent years.

Polls have reflected voter discontent with Bush for many months, but as the election nears, operatives are paying special attention to one subset of the numbers. It is the wide disparity between the number of people who are passionate in their dislike of Bush vs. those who support him with equal fervor.

Remember when we had a 50-50 nation? Now it’s more like 60-40. In our favor. And according to Babington, the ranks of the genuinely passionate are even more unequal —

The GOP is getting nervous.

“Angry voters turn out and vote their anger,” said Glen Bolger, a pollster for several Republican congressional candidates. “Democrats will have an easier time of getting out their vote because of their intense disapproval of the president. That means we Republicans are going to have to bring our ‘A’ turnout game in November.”

Anger is a tricky thing. It can motivate people, but it can also repel. I wrote last week, for example, that antiwar protests are more effective when protesters are serious but not angry. That’s because people who are not angry at the same things you are will be uncomfortable with your anger. If you want to persuade people to see your point of view, it helps to do it in a not-angry way.

Blogging, on the other hand, is not about persuasion as much as it is about peeling away layers of socially conditioned bullshit to get at bare-bones truth. A good blogger is an honest blogger. I’d say to any blogger that if you’re angry, dig into yourself to find the source of your anger and blog it. Don’t worry about what the neighbors will think.

Honor your anger. But before you express it, sort out the righteous from the unrighteous. Immediately after a storm, the water is muddy; rage is indiscriminate. It takes time to discriminate, for the mud to settle. But once the stream runs clear, express your outrage against any who have violated your being. Give the person you intend to love the gift of discriminating anger.

This is exactly what fuels much of the “angry” Left Blogosphere. Anger motivated a whole lot of leftie bloggers to start blogging. Collectively, these past few years, we’ve been sifting through the mud to achieve clarity, to understand the lunatic impulses that sent our nation down a self-destructive path. Through blogging we inform each other, we focus, we prioritize, and we organize. But we’re not a bleeping public relations service. If you’re uncomfortable with our anger, go somewhere else.

Another interesting thing about anger is that it’s often in the eyes of beholders. How many times have you read about how “angry” Hillary Clinton is? Now, think about it — have you ever seen her be really angry? I have not. I don’t know the lady personally — maybe she is angry — but in public appearances she’s never struck me as being all that angry. At most, I seen her annoyed, or maybe mildly alarmed, but I can’t say I’ve seen her angry.

Awhile back I read a social psychology paper that measured people’s attitudes toward displays of anger. One interesting finding was that many people approved of anger coming from men — angry men were perceived as being “strong” — but were offended by anger coming from women. Angry men are strong, but angry women are bitchy.

Thus, Republicans loved Zell Miller’s foaming-at-the-mouth performance at the Republican National Convention, but when Hillary Clinton disagrees with some conservative policy she’s out of control. (Ambition inspires a similar dichotomy — it’s a virtue in a man but a vice in a woman. But that’s another rant.)

I infer from this that anger is one thing coming from the powerful but something else entirely coming from the powerless. Anger in defense of the status quo may be more acceptable socially than anger at the status quo. Over the years I’ve observed that when neutral (or uninformed) people are exposed to two opposing angry factions, most of the time they are more sympathetic to whichever side represents the Establishment. I know we like to say we cheer for the underdog, but that’s only when the underdog doesn’t growl.

I admit this rightie has a point — it’s not psychologically healthy to be angry all the time. However, repressing anger isn’t good mental health hygiene, either. In our culture women in particular tend to suppress anger (wonder why?). I’ve done it myself in the distant past. We’ll go along, denying our own anger, putting up with slights and indignities, telling ourselves that I shouldn’t be angry or even I should be more understanding, and all along that anger is buried deep inside, festering and malignant. Until one day the dam breaks, and it all spills out. And then you realize it was there all along. 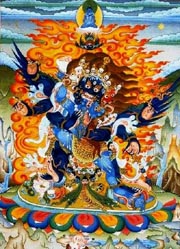 The wrathful dakini is a common figure in Tibetan Buddhist iconography. Dakinis are female archetypes representing the energies of enlightenment. Meditation on the image of a wrathful dakini helps the meditator get in touch with his own anger. Only until anger is fully realized and honestly acknowledged can it be released, and then the passions of anger can be transformed into a positive energy.

Conclusion: Anger by itself is neither good nor bad; it’s what you do with it that matters.

Lacking a smooth transition here, let’s swoop back from the spiritual realm to politics. Will voter anger finally turn the tide against the VRWC? DemFromCT has this observation:

Americans are at the ‘tune out/go away’ phase with Bush. He’s a reminder of that painful mistake at the voting booth… the one that makes Bush voters ‘not interested in politics anymore’ when you talk to them. Denial, bargaining, anger, depression, acceptance. They are somewhere between depressed and accepting of his incompetence. keep that in mind when you talk to them, and don’t rub their faces in it. Just give them an alternative.

I agree; the enormous majority of Americans don’t want to hear about Bush any more. They don’t care what he says. They don’t care what he thinks. He can trot around the Rose Garden and declare he supports Donald Rumsfeld and we’re winning in Iraq and Health Savings Accounts are just peachy all he likes; hardly anyone is listening. He has become irrelevant.

This by itself is not going to turn the House and Senate over to Dems in November, but surely it will help.

And let me say that I’d rather see an angry electorate than a complacent electorate. Angry people care.

14 thoughts on “Speaking of Anger”