Today Little Lulu is in a self-righeousness snit — actually a combined self-righteousness and victimization snit — because of a six-foot naked chocolate Jesus on display in a midtown Manhattan gallery. The anatomically correct sculpture portrays Jesus in a crucifixion pose and is made of 200 pounds of milk chocolate.

Little Lulu complains because the evil “MSM” is covering — well, not covering, actually — the naked chocolate Jesus: “No pixelation. No withholding the photos in the name of respect for Christianity. No taboos.”

And she brings up the infamous Danish Mohammad cartoons — the MSM wouldn’t publish racist cartoons out of respect for Islam, but they will publish photographs of a naked chocolate Jesus. No fair.

I don’t know what the sculpture’s intentions were, but seems to me a six-foot naked chocolate Jesus amounts to a powerful statement on the commercialization of Easter. If there had been some chocolate Easter bunnies at Jesus’ feet, so much the better. That a suffering, exposed and vulnerable Jesus should be taboo while Disneyfied pagan fertility symbols are OK is just one more example of What’s Wrong With America, seems to me. But alas, because of whining from people like our good buddy Bill “I hate everybody” Donohue, the sculpture is no longer on display.

And guess who was behind all of this? The Catholic Leagueâ€™s Bill Donohue, who called the chocolate display was â€œone of the worst assaults on Christian sensibilities ever.â€ (Really, Bill? Ever? In two millennia, this is among the very worst?)

David Kuo, formerly of Bushâ€™s faith-based office, had a different, and less unhinged, perspective, concluding that the six-foot, milk-chocolate sculpture might be â€œthe perfect piece of art for holy week.â€

Jesusâ€™ story isnâ€™t nice, it isnâ€™t neat, it isnâ€™t comfortable. It is the opposite of all of those things. In so many ways those of us who say we follow Jesus actually want a sort of â€œchocolate Jesusâ€ of our own – one that is sweet, one that demands little from us, one that we can mold into our forms – perhaps politically conservative, perhaps liberal, maybe happy with just a few of our dollars given to the poor every now and again, perhaps content with those who simply say they love him and then lead lives little different from anyone else.

It is easy for some religious leaders to decry a piece of art and say – as some have (apparently with a straight face) – it is â€œone of the worst assaults on Christian sensibilities ever.â€ (I suppose that genocide in Darfur is merely an â€œaffrontâ€ to Christian sensibilities?) But instead of getting all amped up over this â€œart,â€ Christians should be spending time facing the real and very challenging Jesus found in the Gospels and encouraging others to do the same. I know that is what I need to do.

Bill Donohue, I think heâ€™s talking to you.

The gallery should put a six-foot tall cutesy-poo chocolate Easter bunny where the Jesus was, with a sign saying “How wingnuts view the passion of Christ.” 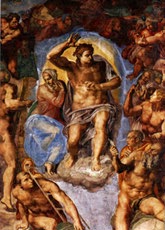 It seems the nudity bothered the wingnuts more than the chocolate, even though the Bible seems to say Jesus was naked at his crucifixion — “And they crucified him, and parted his garments, casting lots: that it might be fulfilled which was spoken by the prophet, They parted my garments among them, and upon my vesture did they cast lots” (Matthew 27:35, King James version).

This can’t be the first time in two millennia that Jesus has been betrayed nude. There’s a nearly naked Jesus on the ceiling of the Sistine Chapel, for example. The bit of gauze might have been one of the modesty drapes painted over Michelangelo’s masterpiece by Daniele de Volterra at the request of Pope Paul III. (People had complained about all the weenies flapping around on the ceiling.)

In other religion news —

Barack Obama is a member of the United Church of Christ, a mainstream Protestant denomination. The particular church he attends has an African American congregation. Some elements on the Right have spun this into a claim that Obama is part of a black separatist cult. (And these are the same people who claim to be the champions and protectors of religion.) Pastor Dan at Street Prophets writes to Sean Hannity about this little misunderstanding.

Update: Via Clif at American Street — the chocolate Jesus was removed from the gallery because of fears of violent retaliation from Christians:

The hotel and the gallery were overrun Thursday with angry phone calls and e-mails about the exhibit. Semler said the calls included death threats over the work of artist Cosimo Cavallaro, who was described as disappointed by the decision to cancel the display.

“In this situation, the hotel couldn’t continue to be supportive because of a fear for their own safety,” Semler said.

Shades of Idomeneo. Michelle was upset because the Berlin Opera canceled a production of the opera because of a scene showing Mohammad’s severed head. The Berlin Opera was afraid of retaliation from Muslims, and Michelle said,

I have far more of a beef with the Muslim censors leading the Religion of Perpetual Outrage than I do with a goofy German art director messing around with Mozart.