If you didn’t catch Keith Olbermann’s special comments tonight, don’t worry. I’m sure someone is uploading a video to YouTube even as I keyboard, and soon it will be all over the web.

He said the Democratic presidential nomination is likely to be decided tomorrow. Not tomorrow as in the future, but tomorrow, May 24. The time has come for them to show us what they’re made of. Have they learned the lesson of October 2002, when Congress passed the war resolution? Or will they make the same damnfool mistake again?

Sen. Chris Dodd certainly helped himself today by making it clear he didn’t like the new appropriation bill.

I understand John Edwards has also spoken out against it. But according to Keith Olbermann, Joe Biden is going to vote for it, and the rest of the candidates haven’t been heard from (although I doubt Dennis Kucinich approves).

In particular I’m thinking about Barack Obama. If Sen. Obama wants to seal the deal and take front runner status away from Hillary Clinton, I think he could do so easily right now by taking a firm stand against the appropriation deal. If he doesn’t, I think he’ll come to regret it.

Looking for something useful to do today? Bob Fertik at Democrats.com has a suggestion —

Why did Harry Reid and Nancy Pelosi surrender to Bush on the Iraq War Supplemental? Not because they wanted to — both Reid and Pelosi are passionately opposed to the war. Unfortunately, there are simply not enough Democrats and Republicans in Congress who are willing to join them in standing up to Bush.

What are the numbers? We know them exactly because the Senate and the House just voted on setting a deadline for bringing U.S. troops home from Iraq.

More importantly, what can we do to change those numbers? How can we get pro-war Democrats and Republicans to change and vote against the war?

We thought we sent Congress a loud-and-clear message in 2006 when we swept pro-war Republicans out and swept anti-war Democrats in. Unfortunately a majority in Congress didn’t get the message, so we have to do it again in 2008.

And the time to start is now. Every pro-war member of Congress knows (s)he will face an angry anti-war majority of voters next November, but the sooner they feel the heat, the greater the odds they will see the light and change their position.

If we start now, we can recruit outstanding candidates and organize ourselves to support those candidates. We can put bumper stickers on our cars, signs on our lawns, spread the word to our neighbors and friends, and help raise the money our candidates need to run effective campaigns.

And we can test our strength right away because there are two special elections this summer, both in solid Democratic seats: CA-37, following the death of Juanita Millender MacDonald (June 26), and MA-05, following the retirement of Marty Meehan (Sept. 24).

If you want to help us sweep [pro-war] Republicans and Democrats out of Congress, we have a simple request: sign our Iraq Vote Pledge and forward it to a couple of friends. Our strength is measured by our numbers, so it would be tremendous to get 100,000 voters to sign our pledge.

I also endorse Moveon.org’s drive to ask Democrats to vote no on the new bill.

Please remember that a majority of Democrats support tough anti-war measures. But a simple majority is not enough. We need the minority of war-supporting Democrats, and some Republicans, to see the light before Congress can lawfully take the war away from a rogue, power-usurping President.

I know we’re all discouraged, but the simple fact is that Harry Reid, Nancy Pelosi and most other Democrats “surrendered” because they faced hopeless odds. Their only alternative was to sit on the appropriations bill and leave the troops at the mercy of a despotic and increasingly unglued White House.

Before last fall’s midterm elections I wrote several posts (here’s one) arguing that electing a Democratic majority to Congress was just a tiny first step in a very long march. In fact, I had doubts electing a Democratic majority would effect much change at all. Rather, I saw it as a prerequisite for making change possible. Keeping a Republican majority in Congress would have kept us stuck where we were, at best.

Before the midterms lots of people were saying there was no use electing Democrats because that wouldn’t solve the problem. These people were looking for a magic bullet — one solution that would quickly and easily reverse a complex situation that was years in the making. Anything short of that wasn’t worth bothering about, they said. Now many of these same people are whining that since the Dems haven’t completely crushed the Vast Right-Wing Conspiracy and run the Bush Administration out of Washington (with a simple majority in Congress, and in less than six months) the Dems are worthless and sellouts and not worth supporting.

And if that’s how you feel now, fine. Maybe someday Democracy Jesus will come down from heaven and save us. Or, if you start right now and work very hard, maybe in fifteen or twenty years you can build a viable third party that is competitive on a national level. I think it’s more likely Democracy Jesus will reveal himself in a blaze of glory, but ya never know.

I agree wholeheartedly with Bob F. that the next step is not to lay around whining about how Nancy Pelosi sold out, but to go after the DINO Vichycrats and Republican war supporters with a vengeance. And a nice show of no votes on the new bill would be grand, too.

Think of what we’re going through now as our Valley Forge. It’s rough out there, and we’ve got a lot of fighting ahead of us, but that doesn’t mean we’ve already lost. 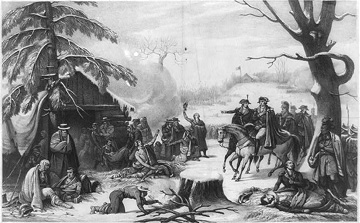 Update: We have a concentration of whiney babies here. I’m not quarreling with the blogger, Mike Stark, who is a good guy. But many of the commenters are set on self-destruct, as in “eating our own.”

Monica Goodling will testify before the House Judiciary Committee this morning. I understand the hearings will be shown on C-SPAN 3 or via live streaming at c-span.org.

Also: This is sweet.