A day after President Bush sought to present evidence showing that Iraq is now the main battlefront against Al Qaeda, the chief US intelligence analyst for international terrorism told Congress that the network’s growing ranks in Pakistan and Afghanistan pose a more immediate threat to the United States.

In rare testimony before two House committees, Edward Gistaro, the national intelligence officer for transnational threats, said that Al Qaeda terrorists operating in South Asia are better equipped to attack the United States than the network’s followers in Iraq are.

Asked which arm of Al Qaeda concerned him the most, Gistaro told a joint session of the House armed services and intelligence panels that it was South Asia.

“The primary concern is in Al Qaeda in South Asia organizing its own plots against the United States,” he said.

Remind me — why are we in Iraq?

Gistaro, the intelligence analyst, was among the main authors of a National Intelligence Estimate released this month that concluded that the network headed by bin Laden presents a “heightened threat” of attack against the United States.

The assessment, a small portion of which was disclosed publicly, said that the organization has been able to retain many of its top lieutenants, recruit new operatives, and establish new training camps in Pakistan’s lawless northwestern frontier.

But in recent days the White House has highlighted one particular line in the declassified version of the report that portrays the group known as Al Qaeda in Iraq as the “most visible and capable affiliate [of Al Qaeda] and the only one known to have expressed a desire to attack the [US] homeland.”

It says so in the NIE, so it must be true.

Abraham Wagner, a senior researcher at the Center for Advanced Studies on Terrorism at Columbia University, called Bush’s speech about the Al Qaeda threat in Iraq a “spin job.”

“In the Cold War it was called ‘threat lumping,’ ” Wagner said. “It is creating a threat to justify what you are doing. Al Qaeda in Iraq never existed prior to the US activity in Iraq and I think it is still a small operation.”

“It is unfortunate,” he added, that “the administration, in their last gasp to justify what they are doing, are inventing threats and misrepresenting what they are getting from the intelligence community.”

But al Qaeda is not the only monster under the bed. Sidney Blumenthal writes in Salon:

President Bush’s political strategy at home is an implicit if unintended admission of the failure of his military strategy in Iraq and toward terrorism generally. Betrayal is his theme, delivered in his speeches, embroidered by his officials and trumpeted by the brass band of neoconservative publicists. The foundation for his stab-in-the-back theory was laid in the beginning.

“Either you are with us or you are with the terrorists,” Bush said in his joint address to Congress nine days after the Sept. 11, 2001, attacks.

We know where this is going, don’t we?

At the Charleston, S.C., Air Force Base on Tuesday, Bush resumed his repudiated habit of conflating threats, suggesting a connection between 9/11 and the Iraq war, and intensified his blaming of domestic critics for the shortcomings of his policy. His story line depends upon omitting his own part in the calamity. “The facts are,” insisted Bush to his captive audience, “that al-Qaida terrorists killed Americans on 9/11, they’re fighting us in Iraq and across the world, and they are plotting to kill Americans here at home again.”

But how did it happen that al-Qaida in Iraq, sworn enemy of Saddam Hussein and his secularism, operating in isolation prior to 9/11, though almost certainly with the connivance and protection of Kurdish leader and current Iraqi President Jalal Talabani, has come to thrive under the U.S. occupation? And since AQI represents perhaps 1 percent or less of the insurgent strength, how can it be depicted as the main foe, capable of seizing state power? The other Sunni insurgent groups increasingly view it as an impediment to their own ambitions and have marked it for elimination. Rather than address these problematic complexities, Bush points the finger of blame at U.S. senators who dare to question his policy. “Those who justify withdrawing our troops from Iraq by denying the threat of al-Qaida in Iraq and its ties to Osama bin Laden ignore the clear consequences of such a retreat.” 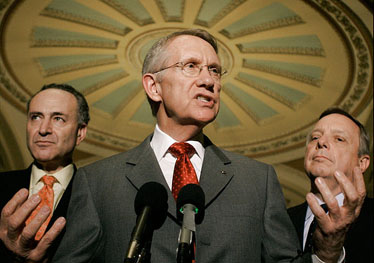 The absence of victory inspires a search for an enemy within. Bush’s stab-in-the-back theory is the latest corollary to the old policy that military force will create political success. Bush is a vulgar Maoist: “Political power comes from the barrel of a gun,” said Chairman Mao. But the surge is simply an endlessly repetitive reaction to the failure of the purely military.

The resolution we say we want requires a stable government that the majority of the Iraqi people recognize as legitimate. The only justification for keeping U.S. troops in Iraq is to provide time and security so that stability can happen. However, it ain’t happenin’, and our presence there is a big reason why.

Somehow, in the political vacuum, additional U.S. troops are supposed to quell the civil war, compel the sects and factions to lie down like lambs, and destroy AQI. U.S. ambassador Ryan Crocker last week begged that the Iraqi government not be held accountable for meeting political benchmarks, none of which have been realized; and at the same time he requested exit visas for his Iraqi staff, who obviously have no confidence in the Bush policy and do not wish to leave via the embassy roof. Crocker’s actions speak louder than his words — and louder than Bush’s.

Bush, however, clings to the rhetoric of conventional warfare, of “victory” and “retreat.” The collapsed Iraqi state, proliferation of sectarian warfare and murderous strife even among Shiite militias bewilder him; clear-cut dichotomies are more comforting, producing deeper confusion. The friend of his enemy is his friend; the enemy of his enemy is not his friend. Meanwhile, Bush seeks to displace responsibility for the potentially dire consequences of his policy on others.

I’ve spent so much time over the past five years describing George W. Bush as a total waste of human protoplasm that I’m getting bored with it myself. One thing the Bush Episode has shown me, however, is that our republican form of government is far more fragile than I had imagined.

The President of the United States is keeping soldiers in a pointless war while he trots around the country telling lies about it because he lacks the moral courage to admit his policies aren’t working. The White House is openly breaking the law, but Bush may be able to shield himself from accountabiity by keeping a profoundly dishonest Attorney General in place.

There have been White House scandals before, but until Watergate the worst of the scandals did not involve the President himself. In the case of Watergate, Republicans in Congress finally went to the President and told him plainly they would not protect him from impeachment. Now it seems the entire Administration is a web of conspiracies, with the President and Veep at the center, and by placing corrupt people in the right places they are trying to put themselves out of reach of the law. And it is possible they will succeed. I do not believe anything like this has ever happened before. And the war goes on.