There’s no better illustration of the intellectual bankruptcy of the Right than a comparison of Mitt Romney and John Edwards. 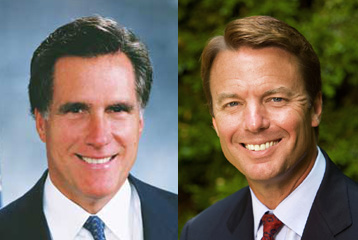 And yes, I’m talking about the hair. Righties cannot speak of Edwards without calling him the “Breck girl.” Surely Mitt goes through as much shampoo as John. The point, of course, is to feminize Edwards, but I say if either of these two leans more toward yin than yang, Mitt’s the guy. Not that there’s anything wrong with that.

And speaking of guys with hair … 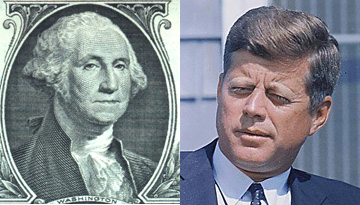 We could analyze all of the presidents and their coiffures, but I suspect there is little correlation between hair quality and job performance. Or masculinity, for that matter. John Kennedy’s alleged lasting contribution to men’s fashion was the death of the hat (Snopes questions this). Whatever the cause, fedoras for daytime wear did disappear suddenly about the time JFK was elected — the better to see a guy’s hair, my dears. But no one has ever questioned JFK’s manliness, as far as I know.

No matter. Someone introduced the “Breck girl” comment into American political discourse, and righties (plus Mo Dowd) picked it up and can’t let go of it.

And then there’s the wealth issue. David Leonhardt writes in today’s New York Times that Edwards and Romney both made fortunes in the 1980s. Yet Edwards is running on economic populism an Romney is a “free markets” guy.

The two men represent a clear divide between the Democratic and Republican parties over whether the government should redistribute more wealth, from the rich downward, now that economic inequality is greater than it has been since the 1920s.

I’d like to point out that ordinary working people created most of that wealth. Inequality doesn’t grow because the wealthy are somehow more deserving and working stiffs less so; it grows because the wealthy are able to control the wealth distribution system to their advantage. The role of government is not to take money away from the rich to give to the poor, but to keep the wealthy from gaming the system.

And this is good for us all in the long run, primarily because a nation with a large and upwardly mobile middle class is likely to be a politically stable nation; a nation in which most of the population is shut out of enjoying the wealth they create with their labor is asking for revolution.

Mr. Romney and Mr. Edwards also represent a divide among the affluent themselves. Many of the new wealthy â€” the great majority, in all likelihood â€” see their success as a sign of this countryâ€™s economic strength. Yet there is also a minority â€” including Mr. Buffett and William H. Gates Sr., Mr. Gatesâ€™s father, who have both opposed eliminating the estate tax â€” worried about inequality. …

… Every leading Democratic candidate has proposed rescinding the Bush administrationâ€™s tax cuts on households making at least $250,000, saying the money can be better used on programs to help the middle class. Every leading Republican candidate favors making the tax cuts permanent, saying that tax increases would hurt economic growth and, by extension, the middle class.

It may be significant that Edwards is the son of a mill worker and Romney is the son of an automobile executive. Romney explicitly denies there are two Americas, but it’s possible he’s never lived in America. Instead, he has lived his whole life in the Privilege Bubble.

Yet, on the Right, Edwards is called out for being a prissy poseur. Byron York wrote in September:

By the way, Edwardsâ€™s line, â€œI was brought home to a two-room house in a mill villageâ€ was carefully crafted, a reflection of his years of experience as a personal injury lawyer. Yes, after he was born he was brought home to a small house. But within a year his family moved to a better house as his father, a mill worker, began a rise that eventually made him a supervisor.

Did I mention Mitt’s dad was an auto executive? But the implication is that because Edwards has money now, he can’t possibly be sincere about wanting to help working people get a fair deal. Or else people who wish to help the poor are supposed to be poor. Or something. But in American history there have been other well-off people who fought plutocracy and tried to even the playing field.

Theodore, in fact, made a point of stepping out of the privilege bubble to hang out with cowboys and woodsmen. Franklin’s point of view likely was shaped by polio. Along with the various Roosevelts, the Kennedys — wealthier, I believe, than the Roosevelts — also came to be a fairly liberal/populist group.

The Right cannot honestly debate Edwards’s proposals, or much of anything else, so they fall back on criticizing Edwards’s looks and lifestyle without bothering to examine their own guys in the same light. Did I say something about intellectual bankruptcy? I believe I did.

Update: An editorial from the Concord Monitor — “Romney should not be the next president.”