State of the Blogosphere: 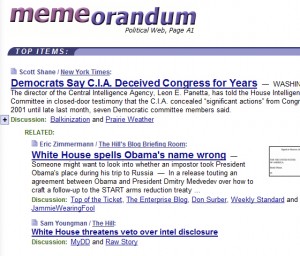 CIA Director Leon Panetta tells the House Intelligence Committee that the CIA has been hiding significant information from Congress, beginning in 2001 and continuing until last month, presumably when Mr. Panetta found out about it.

In the past, this would have been a significant scandal. However, in post-Bush America the scandalous is normal.

And the Right Blogosphere leaps upon the significant development that the President’s name was misspelled in a White House press release. This is the shiny thing that will keep them distracted from the significance of the first story for a few hours, until someone among them cobbles together a rationalization/excuse they can all get behind.

The third story connects back to the first. President Obama objects to a provision that would require him to inform more than 40 members of Congress — instead of just the so-called “Gang of Eight” — about covert actions taken overseas. Make of that what you will.

23 thoughts on “In a Nutshell”