A Senate Foreign Relations Committee report says the Bush Administration got soft and let bin Laden get away.

Osama Bin Laden was within military reach when the Bush administration allowed him to disappear into the mountains of Afghanistan rather than pursue him with a massive military force, a new Senate report says.

The report asserts that the failure to get the terrorist leader when he was at his most vulnerable in December 2001 – three months after the 9/11 attacks – led to today’s reinvigorated insurgency in Afghanistan. …

… The report calls then-Defense Secretary Donald Rumsfeld and Gen. Tommy Franks, the top military commander at the time, to the carpet and asserts the U.S. had the means to mount a rapid assault on Bin Laden with several thousand troops.

Instead, fewer than 100 commandoes, working with Afghan militias, tried to capitalize on air strikes and track down the ragged band of terrorists.

At the time, Rumsfeld expressed concern over the backlash that could be created by a large U.S. troop presence,

It never occurred to him to apply the same concern to Iraq?

On or about Dec. 16, 2001, Bin Laden and bodyguards “walked unmolested out of Tora Bora and disappeared into Pakistan’s unregulated tribal area,” where he is still believed to be, the report says.

The report, based in part on a little-noticed 2007 history of the Tora Bora episode by the militaryâ€™s Special Operations Command, asserts that the consequences of not sending American troops in 2001 to block Mr. bin Ladenâ€™s escape into Pakistan are still being felt.

The report blames the lapse for â€œlaying the foundation for todayâ€™s protracted Afghan insurgency and inflaming the internal strife now endangering Pakistan.â€

Here’s the punch line: Jon Meacham, editor of Newsweek, actually has an op ed in the current issue titled “Why Dick Cheney Should Run in 2012.” I don’t think it’s a spoof. Meachem doesn’t exactly say Cheney should be president, but he somehow thinks Cheney’s ideas should still be taken seriously.

A campaign would also give us an occasion that history denied us in 2008: an opportunity to adjudicate the George W. Bush years in a direct way.

Or, we could engage in lots of investigations followed by lots of public hearings.

As John McCain pointed out in the fall of 2008, he is not Bush. Nor is Cheney, but the former vice president would make the case for the harder-line elements of the Bush world view.

And we need to revisit the “Bush world view” why, exactly?

Far from fading away, Cheney has been the voice of the opposition since the inauguration. Wouldn’t it be more productive and even illuminating if he took his arguments out of the realm of punditry and into the arena of electoral politics? Are we more or less secure because of the conduct of the wars in Afghanistan and Iraq? Does the former vice president still believe in a connection between Saddam and Al Qaeda? Did the counterterror measures adopted in the aftermath of the attacks go too far? Let’s have the fight and see what the country thinks.

Or, let’s not. Instead, let’s round up the turkeys and send them to The Hague. The Bush world view would get thoroughly and objectively aired there, I suspect. 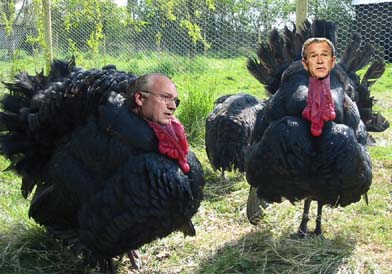 22 thoughts on “Report: Bush Let bin Laden Get Away”