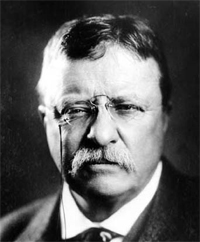 “The duty of Congress is to provide a method by which the interest of the whole people shall be all that receives consideration.” — Theodore Roosevelt, 1910

An article by Chuck Collins and Sam Pizzigati at Common Dreams reminded me that one hundred years ago today Theodore Roosevelt delivered his New Nationalism speech in Osawatomie, Kansas, to an audience of Civil War veterans. Weirdly, Collins and Pizzigati do not provide a link to the speech. So here it is: “The New Nationalism,” Theodore Roosevelt.

It’s sad to realize that much of what TR said in that speech would get him branded as a far-left Marxist extremist today, including the rather mild quote at the top of this post. Indeed, this speech makes our current president look downright conservative.

I once heard someone call the “New Nationalism” speech the foundation of modern liberalism, and I have to agree. That’s not to say that TR was completely liberal by our standards today. As a man of his day, he harbored some racist and sexist views. But then, so did Abraham Lincoln and Thomas Jefferson. We are all creatures of our cultural conditioning.

But this speech lays out the broad principles of liberalism well, better than anything that came before it. And better that most stuff that came after it, for that matter. A shame nobody read this speech to the tea partiers this weekend. Many heads would have exploded.

Elsewhere — I’m a bit tired of doom and gloom, so I’m posting a couple of links to cheerful stories.

Not your ordinary horseshoe — the story of Molly the pony, with adorable pictures.

Shocker — a Christian minister who is actually, um, Christian.

Update: Yes! I knew it! Here is Glenn Beck from this past February at CPAC, calling Theodore Roosevelt a socialist. Beck pointed to this section of the New Nationalism speech —

We grudge no man a fortune in civil life if it is honorably obtained and well used. It is not even enough that it should have been gained without doing damage to the community. We should permit it to be gained only so long as the gaining represents benefit to the community. This, I know, implies a policy of a far more active governmental interference with social and economic conditions in this country than we have yet had, but I think we have got to face the fact that such an increase in governmental control is now necessary.

Dana Milbank describes what happened next:

“Is this what the Republican Party stands for?” Beck demanded. He was answered with boos and cries of “no!” “It’s big government, it’s a socialist utopia and we need to address it as if it is a cancer.”

Obama, no doubt, will be delighted to learn that he has been joined in the conservatives’ ire by the Hero of San Juan Hill.

Jonah Goldberg agreed with Beck, utterly mangling what Roosevelt was saying in the process.

19 thoughts on “One Hundred Years Ago Today (Updated)”