Following up the recent commenter who repeated the oft-told lie that wealthy people carry most of the tax burden — Paul Krugman addresses this on his blog today, in a post called “Zombie Tax Lies.” If you figure all taxes — income, FICA, state taxes, etc. — the percentage of the total tax burden is remarkably un-progressive — 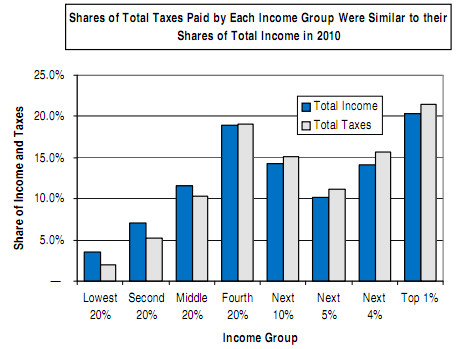 Again, the blue bar shows percentage of income, and the gray bar shows what percentage of the total tax burden is paid by that income group. For more data, see Citizens for Tax Justice.

But when they want to talk about who pays the most taxes, for some reason FICA taxes don’t count. But FICA taxes are not progressive at all. Everybody pays the same rate for income up to $106,800, and income above that isn’t taxed at all. Since FICA taxes don’t count as taxes in the minds of the wealthy, you’d think they wouldn’t argue about having that cap lifted, would you?

And talk about taxes being a burden to small business– if you are employed, the employer pays a portion of the total FICA tax. As a self-employed person, I pay the entire FICA tax, called the “self-employment tax.” It’s a real bite.

Anyway — for your viewing pleasure — here’s another zombie congressman, Sean Duffy of Wisconsin, being skewered by actual thinking persons who know what they’re talking about —