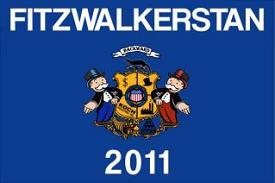 Wisconsin Republicans fear they will lose the state Senate in recall elections next month. So, they’ve decided to muddy the waters by running fake Democratic candidates against the six Republican senators being recalled.

I’ve yet to find a clear explanation of exactly how the recall elections will work, but I take it the Republican move is meant to delay the recalls by another month by forcing Democrats to hold a primary election, at a cost to the state of tens of thousands of dollars.

The fake candidate scheme is explained in newspapers all over Wisconsin, and no doubt in radio and television news as well. Seems to me it just makes the Republicans look more pathetic. If I had a lot of money, I would be buying full page ads in all Wisconsin newspapers saying, “Wisconsin Voters: Republicans Must Think You Are Stupid. Let’s Show ‘Em You’re Not.”

The state Government Accountability Board has now certified the recall petitions against three Democratic senators as well. Thousands of signatures were tossed, but not enough to invalidate the petitions.

What Republicans Are Saying About the Recall

More Fraud from the Republican Party of Walker

3 thoughts on “The News From Fitzwalkerstan”