Juan Cole’s most recent post on Libya. So far, so good. He thinks the new government will reject NATO bases, which is not surprising. He also thinks China will be frozen out of new oil investments in Libya. Heh.

In the presidential election of 1912, 75 percent of the vote went to candidates who called themselves â€œprogressiveâ€ or â€œsocialist.â€

Republicans are going all out trying to pin a $4 trillion national debt on President Obama. But see this nice graphic I picked up at Steve Benen’s place: 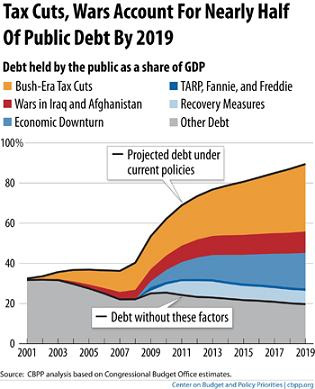 Update: The artist who painted (warning — if you’re at work, turn your volume off before clicking) this painting sent me a nice letter asking if I wanted to buy a print. Gee, what should I say?

Has Michele Bachmann peaked? I’ve been thinking the same thing.

A Brit has to explain to other Brits that not all Americans are crazy.

9 thoughts on “Stuff to Read”