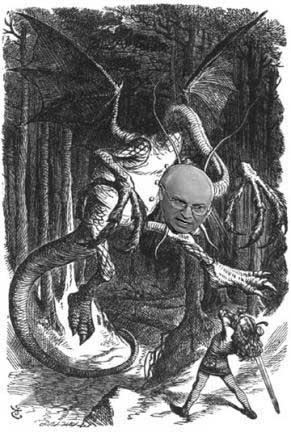 Dick the Dick has slithered out from wherever he keeps himself and offered his opinion on Iraq. The widespread reaction from news media has been, “Really, Dick? You went there?” So that’s something. He even caught a hard time from Megyn Kelly.

[Update: I didn’t see the Megyn Kelley encounter myself; apparently it wasn’t as tough as was hyped.]

Yet I understand the old neocon crowd is turning up on the teevee. Apparently they still think they are owed a victory parade.

Back in 2006 I wrote a post called “Save Us From CEOs” which is more or less about the phenomenon of high-level executives and politicians who are pathologically incapable of perceiving their own failures. Dick and his pal Shrub are featured prominently, and I think it holds up pretty well.

The problem is that, as a species, we seem always to allow the self-confident, assertive types to be in charge whether they actually know what they’re doing, or not. I don’t think this is a new thing (see, for example, the Civil War and General George B. McClellan). The Dickster is such a perfect example of such a specimen that for a time “Dick Cheney” became a kind of euphemism for “arrogant clueless empty suit.” See also “The Agony of Dick.”

Watching Dick parade his magnificent lack of self-awareness today is both fascinating and horrible, like watching pythons trying to swallow alligators. He’s wrapped himself in so many layers of bullshit I doubt there’s a force on this planet that could get through to him that he failed.

12 thoughts on “Not Enough Bell Jars”