While everyone is hyperventilating about emails that, apparently, no one has read yet, Kurt Eichenwald reports at Newsweek,

Over the course of decades, Donald Trumpâ€™s companies have systematically destroyed or hidden thousands of emails, digital records and paper documents demanded in official proceedings, often in defiance of court orders. These tacticsâ€”exposed by a Newsweek review of thousands of pages of court filings, judicial orders and affidavits from an array of court casesâ€”have enraged judges, prosecutors, opposing lawyers and the many ordinary citizens entangled in litigation with Trump. In each instance, Trump and entities he controlled also erected numerous hurdles that made lawsuits drag on for years, forcing courtroom opponents to spend huge sums of money in legal fees as they struggledâ€”sometimes in vainâ€”to obtain records.

Nothing so far has been revealed in Clinton’s emails that warranted indictments. But it sounds as if Trump has been breaking laws for years and getting away with it. Note that the worst of the actions Eichenwald uncovered relate to Trump’s violations of fair housing laws

But let us review what the new Clinton email “revelations” amount to. Executive Summary: Nothing so far. 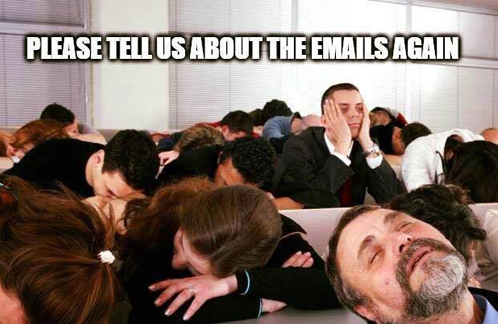 My understanding is that at the time FBI Director James Comey sent his letter to Congress about the emails on Anthony Weiner’s “device,” he didn’t yet have a warrant that allowed the FBI to read them. All they knew was that State Department emails ended up on Weiner’s “device,” supposedly forwarded by Huma Abedin, although she says she doesn’t know how that happened. We don’t know if any of those emails were sent or received by Hillary Clinton, or if Clinton even knew about the emails on the “device.”

Some news outlets are reporting that the emails were in Abedin’s Yahoo account, which makes me wonder if somehow an account was set up to automatically forward emails and Abedin didn’t realize it. The Clinton campaign is not exactly a tech-savvy crew. But if that’s the case, it’s likely most of these emails are duplicates of ones already known to the FBI.

But there’s more. CNN is reporting that the FBI knew about the emails on the “device” weeks ago. Why did James Comey sit on this information and then release it days before the election? At first it was assumed that Comey sent the letter as soon as he knew about the emails; maybe he wanted to avoid an appearance of being partisan. But if that was the case, it backfired big time.

It is quite telling that even at this late stage of the election, when partisan tempers are naturally running at their fiercest, former career DOJ lawyers, former high level DOJ appointees and legal experts on both sides of the aisle are lining up to say this was not only an extremely poor decision but may even have violated the law. (Note here: President George W. Bush’s top ethics lawyer suggests Comey may even have broken the law. Another example is here.) As far as I can see, no one who actually knows what Comey’s legal, professional and ethical responsibilities were in this case can find a basis to defend his actions. Even Republicans who might be inclined to interpret ambiguous facts through a partisan prism don’t seem able to come up with one.

I’ve said a number of times that I do not believe Comey acted out of a desire to interfere with the outcome of the election. I still believe that. But I’m not sure it matters. What seems inescapable is that Comey has made avoiding criticism from Republicans (and leaks by FBI agents that would generate such criticism) his top, almost his sole priority. That being the case, his intent seems all but irrelevant. It amounts to some professional equivalent of reckless disregard, perhaps with a smattering of largely irrelevant naÃ¯vetÃ© thrown in.

The presidential race has tightened up since Friday, although Clinton is still heavily favored to win.

Meanwhile Sen. Harry Reid has not only accused Comey of violating the Hatch Act; he says the FBI is sitting on damning information about Trump’s ties to the Russian government:

In my communications with you and other top officials in the national security community, it has become clear that you possess explosive information about close ties and coordination between Donald Trump, his top advisors, and the Russian government â€” a foreign interest openly hostile to the United States, which Trump praises at every opportunity. The public has a right to know this information. I wrote to you months ago calling for this information to be released to the public. There is no danger to American interests from releasing it. And yet, you continue to resist calls to inform the public of this critical information.

It should be noted that Brian Ross at ABC News reported last September that Trump does millions of dollars of business with Russians, which wouldn’t have been possible without Putin’s approval.

But I’ll give John Oliver the last word today.

FBI Director James Comey argued privately that it was too close to Election Day for the United States government to name Russia as meddling in the U.S. election and ultimately ensured that the FBI’s name was not on the document that the U.S. government put out, a former bureau official tells CNBC.

The official said some government insiders are perplexed as to why Comey would have election timing concerns with the Russian disclosure but not with the Huma Abedin email discovery disclosure he made Friday.

8 thoughts on “The Damn Emails”