President Trumpâ€™s escalating attacks on the federal judiciary drew denunciation Wednesday from his Supreme Court nominee, Neil Gorsuch, who told a senator that the criticism was â€œdishearteningâ€ and â€œdemoralizingâ€ to independent federal courts.

Sen. Richard Blumenthal (D-Conn.) said Gorsuch made the comments during their private meeting Wednesday, and the account was confirmed by Ron Bonjean, a member of the group guiding the judge through his confirmation process.

Gorsuch had declined to make the comment public, so Blumenthal made it public, and the so-called president went on the attack.

This morning, our president woke up and decided to trash Sen. Richard Blumenthal of Connecticut because Blumenthal revealed that Trumpâ€™s Supreme Court nominee told him privately that he found the presidentâ€™s attacks on the judiciary â€œdemoralizingâ€ and â€œdisheartening.â€

Sen.Richard Blumenthal, who never fought in Vietnam when he said for years he had (major lie),now misrepresents what Judge Gorsuch told him?

Chris Cuomo, in his interview with Sen. Blumenthal, never asked him about his long-term lie about his brave “service” in Vietnam. FAKE NEWS! â€” Donald J. Trump (@realDonaldTrump) February 9, 2017

Keep in mind that the so-called president didn’t just slam Judge James Robart for his restraining order but also insulted the judges on the 9th Circuit Court who are currently reviewing that restraining order, which of course is a great way to win the court over to one’s side.

If the 9th Circuit Court upholds the restraining order, as most people expect it will, the so-called president is likely to become even more unhinged. On cameras, please, oh, please ….

This morning Senator Blumenthal said the nation was in danger of a constitutional crisis:

Sen. Richard Blumenthal (D-Conn.) on Thursday warned that the country is heading toward a “constitutional crisis,” moments after President Trump attacked him for sharing Supreme Court nominee Neil Gorsuch’s concerns with the president’s attacks on judges.

“I said to Judge Gorsuch and I believe that ordinarily a Supreme Court nominee would not be expected to comment on issues or political matters or cases that come before court, but we’re in a very unusual situation,” Blumenthal said on CNN’s “New Day.”

“We’re careening, literally, toward a constitutional crisis. And he’s been nominated by a president who has repeatedly and relentlessly attacked the American judiciary on three separate occasions, their credibility and trust is in question.”

There is an internet rumor that the so-called president un-nominated Gorsuch for the Supreme Court in light of Gorsuch’s comments. That turned out to not be true; the SPOTUSÂ appears to be in denial that Gorsuch said what he said. In fact, he has widened his attacks to include Ron Bonjean and Kelly Ayotte, who both confirmed that Gorsuch indeed said what he said.

But I sincerely hope that this episode comes up in Gorsuch’s hearings, and that Gorsuch has the integrity to make clear that Trump’s comments, and attempts to intimidate the judiciary, are outrageously out of line. Or, even better, that heÂ withdraws his name from nomination in order not to bear the shame of being a Trump nominee.

So let’s see what kind of man you are, Judge Gorsuch. 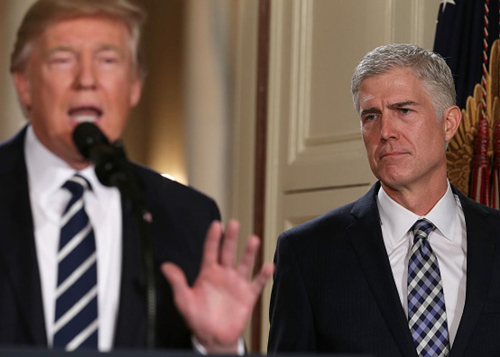 11 thoughts on “Show Us What Kind of Man You Are, Judge Gorsuch”