After a fight of several years, St. Louis passed a law that would gradually raise the minimum wage to $11 per hour, and after that it would increase with inflation. The first stage, a raise fromÂ $7.70 an hour to $10 an hour, went into effect March 5. The $11 per hour was to kick in on January 1, 2018.

A couple of days ago, the governor announced that the state is stepping in and overriding St. Louis. The city’s minimum wage cannot exceed the statewide minimum wage, Gov. Eric Greitens announced.Â The minimum wage in St. Louis will revert to $7.70 an hour on August 28.

â€œIt will kill jobs,â€ Greitens said of the increase. â€œAnd despite what you hear from liberals, it will take money out of peopleâ€™s pockets.â€

So the state is now going to take money out of people’s pockets. Some employers may choose to not take away the raises, but I’m betting that many will happily cut their employees back toÂ $7.70.

Exactly why it’s skin off anyone’s nose that there might be a higher minimum wage in St. Louis than in the many small towns across the state eludes me. A foolish consistency is the hobgoblin of little minds, Gov.Â Greitens.

Today I read of something similar going on in Texas.

Gov. Greg Abbott (R), citing grave worries about â€œsocialisticâ€ behavior in the stateâ€™s liberal cities, has called on Texas lawmakers to gather this month for a special session that will consider a host of bills aimed at curtailing local power on issues ranging from taxation to collecting union dues.

Texas presents perhaps the most dramatic example of the increasingly acrimonious relationship between red-state leaders and their blue city centers, which have moved aggressively to expand environmental regulations and social programs often against the grain of their states.

Republican state leaders across the country have responded to the widening cultural gulf by passing legislation preempting local laws. The best-known example isÂ North Carolinaâ€™s â€œbathroom bill,â€ which was partially reversed this year. It was originally aimed at undercutting Charlotteâ€™s efforts to expand civil rights laws to include LGBT people and to prevent cities from setting their own minimum wage.

â€œOnce you cross the Travis County line, it starts smelling different,â€Â Abbott joked at a recent gathering of Republicans, referring to the county that includes Austin. â€œAnd you know what that fragrance is? Freedom. Itâ€™s the smell of freedom that does not exist in Austin, Texas.â€

Freedom? I don’t think that word means what you think it means, governor.

Austin is suing the state over its draconian “sanctuary cities” law, among other things. Austin is also fighting a developer who plans to destroy hundreds of trees, including some very old and beloved “heritage” oaks that are protected by city ordinance. The governor, naturally, takes the side of the developer, who appears to have won. 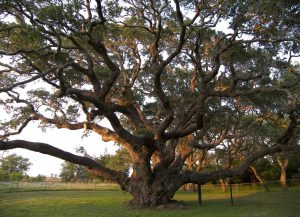 A heritage oak in Austin.

I personally think that if Texas doesn’t want to turn into a desert someday as the planet heats up, it had better hang on to every tree it’s got. But they don’t listen to me.

The people of Austin wonder about their rights to shape the quality of their own community. But when money talks, democracy walks.

Happy 4th of July, Republicans. What is it you’re celebrating, again?

12 thoughts on “Freedom’s Just Another Word for State Authority”