I was cruising around the Web this morning and saw this headline at Haaretz:

What does this tell you about far-right Bannon affiliates? And why must we pay attention to these people? From the article:

The driving force behind the campaign has been far-right blogger Mike Cernovich, who started sharing links to a website called, McMaster Leaks, which is devoted to attacks on McMaster, on social media.

The website featured a brazen anti-Semitic caricature depicting McMaster and retired General David Petraeus, who is considered close to a number of senior NSC officials – as two puppets being controlled by Jewish billionaire George Soros, who himself is being controlled by “the Rothschilds,” the famously rich Jewish family of bankers. After the caricature was mocked on social media, the website edited it, replacing the word “Rothschilds” on the top of the pyramid with the word “Saudis,” but keeping in Soros depiction in place.

Yet McMaster, according to his rivals on the far-right, isn’t only being controlled by the Rothschilds – it turns out he is also “hostile to Israel,” according to articles that have been published in recent days on Breitbart, the far-right website formerly edited by Bannon, and on the Conservative Review. These articles, quoting “administration officials” and a Facebook post by Israeli journalist Caroline Glick, accuse him of such “sins” as opposing an Israeli request to include Prime Minister Benjamin Netanyahu at Trump’s visit to the Western Wall during his visit in Israel earlier this year.

It’s one thing to be anti-Semitic, but to be anti-Semitic but also, apparently, a knee-jerk Zionist requires a scrambling of mental processes possibly unparalleled in modern political history. Well, except perhaps for the so-called patriotic Americans who periodically call for secession. Or this crew: 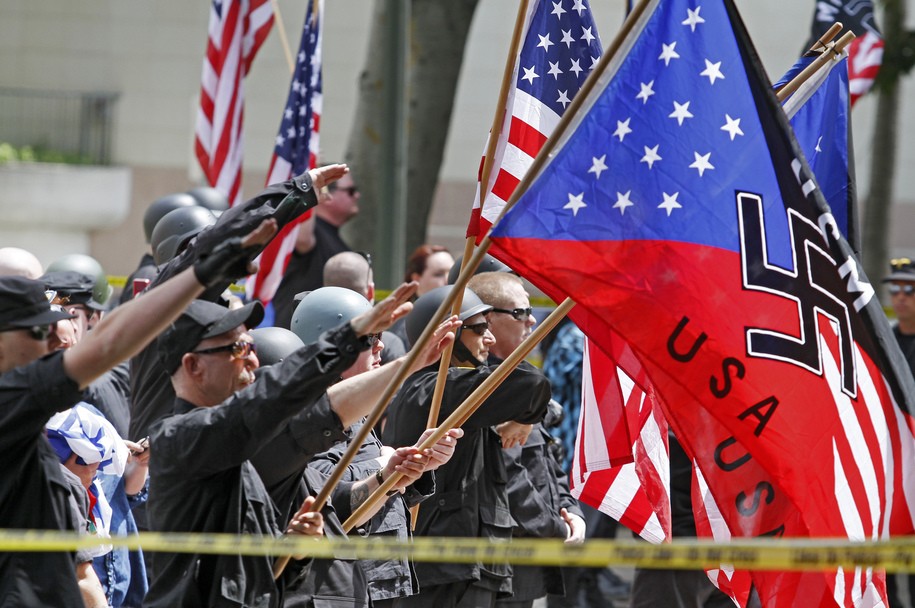 I bet the guys with the Swastikas would tell you they are pro-Israel, too.

This is also from the Haaretz article:

McMaster, it should be noted, was the Trump administration’s most senior representative and speaker earlier this year at the Israeli embassy’s annual Independence Day event. He was warmly received by the crowd and gave a speech in which he expressed the administration’s strong support for Israel, and promised to always safeguard the Jewish state’s security interests.

Okay, so the United States harbors a very twisted whackjob Right. It has always been among us, I suspect. It’s just that lately the whackjobs have been getting jobs related to national security. The reason the whackjobs are targeting McMaster is that he’s finally been allowed to clean house at the National Security Council, “re-assigning” some people who were of the Michael Flynn-Steve Bannon-“Hail Vinland!” persuasion.

From “The War Against H.R. McMaster” at The Atlantic:

McMaster hasÂ cleaned houseÂ at the NSC over the past few weeks. Via his deputy Ricky Waddell, he fired director of strategic planning Rich Higgins last monthÂ over a memoÂ Higgins wrote alleging a deep-state conspiracy against President Trump. McMaster then dismissed two top officials brought on by the previous national-security adviser, Michael Flynn: the NSCâ€™s senior director for the Middle East, Derek Harvey, who was fired last week; and the senior director for intelligence programs, Ezra Cohen-Watnick, who was let go on Wednesday.

McMaster wanted to fire Cohen-Watnick last April, but apparently Bannon blocked that firing. Cohen-Watnick was involved in the flap about Susan RiceÂ requesting theÂ “unmasking” of certain AmericansÂ whose names showed in intelligence reports because they were talking to foreign entities under surveillance.

…Â But McMasterâ€™s show of force has set off alarm bells among Bannon allies in the pro-Trump media sphere, who favored Flynn and regard the national-security adviser as a globalist interloper. Other White House officials have in the past been targets of theirsâ€”Priebus was, for exampleâ€”but the vitriol against McMaster has been notable for its speed and intensity. …

…Â Itâ€™s come from all corners.Â Breitbart News, the website Bannon controlled as executive chairman before joining the Trump campaign, has produced a flurry of negative stories about McMaster over the past two days, accusing him of â€œpurgingâ€ dissenters and kowtowing to â€œholdoversâ€ from the Obama administration.Â Fox NewsÂ host Sean Hannity has tweeted about McMaster, saying he might need to go. Radio host Laura Ingraham has also weighed in, tweeting that â€œObama holdovers at NSC or State Dept who are leaking shd do real time for these leaks. Why has McMasters fired actual Trump supporters?â€Â The Daily CallerÂ publishedÂ an interview with two former NSC officials attacking him, accusing him of undermining the presidentâ€™s foreign-policy agenda. Circa, a site owned by the conservative Sinclair Broadcasting company,Â publishedÂ a letter Thursday that McMaster sent months ago to his predecessor Susan Rice, in which he informed her that she could keep her security clearance. Itâ€™s a standard letter, but it has caused a furor in light of theÂ ongoing controversyÂ over unmasking.

So far, Trump is standing by McMaster, as are the non-Bannon White House faction — Ivanka, Jared, and I assume new chief of staff John Kelly. We’ll see how long that lasts.

12 thoughts on “Here’s Your Ticket to the Fever Swamp”