Well, he does everything bigly. Now Trump has made Bush’s “heck of a job, Brownie” moment look like Clara Barton arriving on the battlefield.

As I posted yesterday, the Trump Administration’s tepid “response” to the humanitarian crisis in Puerto Rico pales in comparison to what Obama did for Haiti in 2010. Even the general in charge of relief there says the Administration isn’t doing enough.

Yesterday in response to some blather from the acting head of Homeland Security about what a great job the Administration is doing in Puerto Rico, San Juan Mayor Carmen YulÃ­n Cruz respondedÂ â€œDammit, this is not a good news story. This is a â€˜people are dyingâ€™ story.â€

Ms. Cruz became a powerful voice of grievance on FridayÂ when she went on television to plead for helpÂ and reject assertions by the Trump administration about how well it was responding. She was incensed by comments made by Elaine Duke, the acting secretary of Homeland Security, who had said on Thursday that it was â€œreally a good news story in terms of our ability to reach people and the limited number of deathsâ€ from the hurricane.

Naturally, Trump responded by being Trump.

The president is responding by citing what he calls â€œsuch poor leadership ability by the Mayor of San Juan, and others in Puerto Rico, who are not able to get their workers to help.â€

Trump says â€œthey want everything to be done for them when it should be a community effort. 10,000 Federal workers now on Island doing a fantastic job.â€

He says the hurricane â€œtotally destroyedâ€ Puerto Rico and that â€œthe military and first responders, despite no electric, roads, phones etc., have done an amazing job.â€

“Grotesque” is really the only word for this pic.twitter.com/W7rnPbRciz

And, of course, the asshole in chief is screaming about fake news.

As Hurricane Maria made landfall on Wednesday, Sept. 20, there was a frenzy of activity publicly and privately. The next day, President Trump called local officials on the island, issued an emergency declaration and pledged that all federal resources would be directed to help.

But then for four days after that â€” as storm-ravaged Puerto Rico struggled for food and water amid the darkness of power outages â€” Trump and his top aides effectively went dark themselves.

Trump jetted to New Jersey that Thursday night to spend a long weekend at his private golf club there, save for a quick trip to AlabamaÂ for a political rally. Neither Trump nor any of his senior White House aides said a word publicly about the unfolding crisis.

Trump did hold a meeting at his golf club that Friday with half a dozen Cabinet officials â€” including acting Homeland Security secretary Elaine Duke, who oversees disaster response â€” but the gathering was to discuss his new travel ban, not the hurricane. Duke and Trump spoke briefly about Puerto Rico but did not talk againÂ until Tuesday, an administration official said. 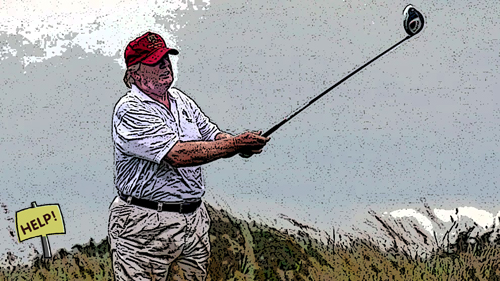 In Puerto Rico, meanwhile, the scope of the devastation was becoming clearer. Virtually the entire island was without power and much of it could be for weeks, officials estimated, and about half of the more than 3 million residents did not have access to clean water. Gas was in short supply, airports and ports were in disrepair, and telecommunications infrastructure had been destroyed.

Instead of stepping up his act, Trump has behaved like a petulant child complaining that not everybody loves him and picking a feud with the Mayor of San Juan.