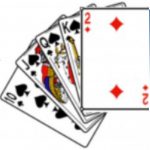 Well, they released the memo. No bombshell. Nothing in it we hadn’t anticipated. You can read it here.

It’s also the case that there are no redactions, but I see nothing in it that would seem to me to be a security problem. There’s been a lot of hyperventilating over nothing, in other words.

James Comey probably sums it up best: “That’s it?” 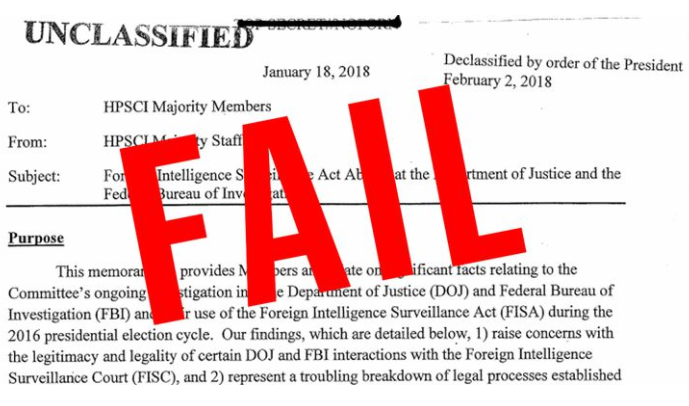 It reads like a shoddy legal brief. Specifically, one written in haste by an attorney who knows he doesnâ€™t have the law or the facts on his side so he gins up a compelling narrative, hoping the reviewing court or opposing counsel doesnâ€™t dig too deep into the record to find all the holes. …

…Theyâ€™ve written what amounts to a series of political talking points, like the kind you would see in a campaign fundraising letter, designed to make the FBI and the Justice Department look bad, and to make the targets of the investigation, Carter Page and George Papadopoulos, look like victims of dark chicanery. …

…This memo, this creature, would not stand up in court and it should not stand up in the court of public opinion. No judge would allow it into evidence, no expert witness would rely on it for an opinion, no one would swear to its contents under penalty of perjury. It raises countless more questions than it answersâ€”and, really, the only question it answers accurately is how far Rep. Devin Nunes and his fellow travelers at the House Intelligence Committee have been willing to go to protect the White House from an investigation into Russian tampering, an investigation we know that a vast majority of Americans want to see completed.

The key hinge in the memo is that it consistently seeks to suggest that the Dossier was the heart of the governmentâ€™s case or even the entirety of the governmentâ€™s case without actually providing any evidence for this claim or â€“ critically â€“ describing any other evidence the government may have had or may have included in the application. I see two key places in the memo where they make this case. On page 2 the memo states the dossier was â€œan essential partâ€ of the government application. On the bottom of page 3, the memo says: â€œDeputy Director McCabe testified before the Committee in December 2017 that no surveillance warrant would have been sought from the FISC without the Steele dossier information.â€

The latter quote is simply a characterization of what McCabe said. His actual quote would be critical to judging its significance. …

IMO what McCabe allegedly said is the most damaging thing to the investigation in the memo, but as I understand it, disclosing the connection to Clinton was not a requirement. “The idea that you could only put material in a FISA application that is guaranteed not to be tainted by anybody with possibly questionable motives is not an idea that has any currency in law enforcement circles,” Jonathan Swan wrote at Axios. It would be nice also if we had an actual quote, in context.

Again, there’s nothing here that changes what has been speculated about the memo over the past several days. It’s all about disingenuously connecting Hillary Clinton (through the Steele Dossier) to the FISA warrant and claiming that because the warrant application didn’t specify who commissioned the dossier, the warrant was tainted. That’s really all there is to it. We’ve already gone over why the FISA warrant wouldn’t have been extended based on the Steele Dossier alone, and also why it’s not a given that the inclusion of the Steele Dossier on the warrant application was a problem. Basically, it’s only a problem because Trump apologists say it is.

Jonathan Swan goes on to say that the memo could still be used to fire Rod Rosenstein. Also,

Part of the reasonÂ this memo is generating such a broad variety of reaction is that the vast majority of Americans don’t know anything about FISA or the authorities the intelligence community have to surveil Americans. Intel geeks are writing this off as underwhelming, but Americans who are uninitiated to FISA may find this troubling.

So it depends on who wins the spin game. But that’s not exactly Democrats’ strong suit, unfortunately.

Along those lines, Dahlia Lithwick thinks the memo is a Trump win:

The Devin Nunes memo is, asÂ was widely expected, a dud. It reveals nothing new, and answers none of the crucial questionsÂ raised by former law enforcement officialsÂ who have said there is nothing in this report that warrants its release. …

… The memo is so silly, and technical, and logic-defying on its face that itâ€™s easy to miss the fact that its genius lies in precisely that.Â  Unless one ambles comfortably in the murky weeds of the Trump-Russia collusion investigation, this will all be just arcane and confusing enough to mean nothing. For the vast majority of Americans, it will be enough that the president has now declared that his own federal intelligence apparatus is corrupt and out to get him, and has conveniently produced an enemies list that conveniently sweeps in all the villains, from Christopher Steele to Dana Boente to Sally Yates to Andrew McCabe, who have declined to play on the presidentâ€™s â€œteam.â€ If the point here is to raise doubts about every investigatory agency capable of scrutinizing Trump, it has been achieved.

On the other hand, they dumped this thing on a Friday, and on Super Bowl weekend, no less. See also “The Nunes Memo Is a Complete Flop” by Jeremy Stahl.

Did anyone notice the stock market dropped 666 points today? I’m not making that up — it’s 666 points. I seem to recall that a big dip on a Friday usually leads to a bigger plunge on Monday. We’ll see.

And did you hear the one about three of Rick Gates’s lawyers told a federal court yesterday that they were immediately withdrawing from the case? The reasons for this are sealed. There is speculation that Gates, a former Trump campaign aid who has been indicted by Bob Mueller for money laundering and other things, will start cooperating. Gates recently hired Washington attorney Tom Green, who has defended perps in Watergate and Iran Contra, among other things.

Update: Someone at RedState of all places actually called out an error in the memo that further damages what little credibility it had.

11 thoughts on “Nunes Showed His Hand. It’s a Busted Flush.”