The Russians were not initially sophisticated in their knowledge of American politics, to the point that they sought out American political actors to learn the basics ….

…The Russians appeared to start to develop a deeper sophistication around U.S. politics in the spring and summer of 2016. This coincided with the same brief period that Manafort was in charge of the Trump campaign. The Russian efforts included purchasing political ads for Trump and against Clinton on social media starting in April, staging pro-Trump rallies and false flag â€œpro-Hillaryâ€ events starting in June, and doing the sort of low stakes political dirty tricks that have been aÂ mainstay of the Republican Party for decades.

For his part, former CIA Director John BrennanÂ speculatedÂ on Friday that it would emerge that U.S. persons had actively conspired with the Russians. â€œWhile some may have been unwitting, I do think that some individuals maybe were knowledgeable about what they were doing and basically strayed from what they should have been doing,â€ he told MSNBC.

Â If you missed Franklin Foer’s profile of Manafort in The Atlantic, do read it. It’s fascinating. This includes some details on Rick Gates, who has been one of Manafort’s sidekicks for several years. Manafort is an amoral sleazebag of the first order who has sucked up a mega-fortune for himself by out-sleazing other sleazebags, and it’s a wonder to me some mobster didn’t put a hit out on him years ago.
Reports that Bob Mueller has pressured Gates to flip on Manafort has upped the ante in the Trump-Russia investigation. The Guardian reports today:

The Guardian reported in DecemberÂ that the FBI asked officials inÂ CyprusÂ for financial information about FBME, a defunct bank used by wealthy Russians that has been accused of serving as a money launderer by US financial regulators. FBME has denied all allegations of wrongdoing.

Manafort served relatively briefly as Trumpâ€™s campaign manager. HeÂ resigned from the campaign in August 2016Â following media reports that raised questions about his former work as a lobbyist for pro-Kremlin forces. On the day he resigned, Manafort opened a shell company that received $13m in loans from two businesses with ties to Trump,Â according to media reports.

Manafort also had business ties to Oleg Deripaska, a Russian oligarch who is close to the Russian president, Vladimir Putin.

On Friday, new court documents filed by prosecutors alleged that bail documents submitted by Manafort had revealed new alleged criminal conduct involving bank fraud. Prosecutors said that Manafort had obtained a mortgage on a property using fake profit and loss statements, which overstated his income by millions of dollars.

Obviously, Mueller is squeezing Manafort to flip on Trump, and I’ll bet he’ll succeed. If the Russian mob doesn’t get to him first, anyway.

Trump seems to know the walls are closing in:

President Trump lashed out with fresh anger about the intensifying Russia probe over the weekend, accusing Democrats of enabling a foreign adversary to interfere in the 2016 election and attacking the FBI as well as his own national security adviser.

In a defiant and error-laden tweetstorm that was remarkable even by his own combative standards, Trump stewed aloud about the latest indictments brought by special counsel Robert S. Mueller III against Russians for their elaborate campaign to denigrate the Democratic presidential nominee, Hillary Clinton, and push voters toward Trump.

President Trump began the weekend believing that something good had just happened to him. An indictment leveled against 13 Russians for interfering with the 2016 election had not accused him or anyone around him of wrongdoing. â€œNo collusionâ€ was his refrain.

But once ensconced at his Florida estate on Friday, Mr. Trump, facing long hours indoors as he avoided breezy rounds of golf after last weekâ€™s school shooting a few miles away, began watching TV.

The presidentâ€™s mood began to darken as it became clearer to him that some commentators were portraying the indictment as nothing for him to celebrate, according to three people with knowledge of his reaction. Those commentators called it proof that he had not won the election on his own, a particularly galling, if not completely accurate, charge for a president long concerned about his legitimacy.

Many people have pointed out that the indictments announced Friday pretty much invalidates the infamous Nunes memo. Jennifer Rubin:

Republicansâ€™ clumsy efforts to attack the FISA warrant for Carter Page or to smear Comey donâ€™t matter. House Intelligence Chairman Devin Nunesâ€™s (R-Calif.) plots and antics andÂ concocted memoÂ are irrelevant. The investigation, at least a good deal of it, rests on facts that are unknown to the House Republicans and are beyond dispute. No Republican is going to stand up to say the indictment is a â€œhoaxâ€ or the allegations against these 13 Russians are â€œfake.â€ …

Indeed, Republicans look precisely like the â€œunwittingâ€ operatives in the indictment who reportedly lent assistance to the Russian operatives. Republicansâ€™ efforts to distract and distort the growing body of evidence make them unwitting (we hope) pawns in the Russiansâ€™ efforts to deny their role. (IfÂ House SpeakerÂ Paul D. Ryan has any political survival skills, now would be a good time for him to yank Nunes off the Intelligence Committee.) And incidentally, Democrats might want to forget about theirÂ counter-memoÂ now that the GOP and Nunes have been utterly discredited. They donâ€™t need to stab a corpse.

Trump is so obviously guilty of something that even the terminally clueless Thomas Friedman is connecting the dots:

President Trump is either totally compromised by the Russians or is a towering fool, or both, but either way he has shown himself unwilling or unable to defend America against a Russian campaign to divide and undermine our democracy.

That is, either Trumpâ€™s real estate empire has taken large amounts of money from shady oligarchs linked to the Kremlin â€” so much that they literally own him; or rumors are true that he engaged in sexual misbehavior while he was in Moscow running the Miss Universe contest, which Russian intelligence has on tape and he doesnâ€™t want released; or Trump actually believes Russian President Vladimir Putin when he says he is innocent of intervening in our elections â€” over the explicit findings of Trumpâ€™s own C.I.A., N.S.A. and F.B.I. chiefs.

In sum, Trump is either hiding something so threatening to himself, or heâ€™s criminally incompetent to be commander in chief. It is impossible yet to say which explanation for his behavior is true, but it seems highly likely that one of these scenarios explains Trumpâ€™s refusal to respond to Russiaâ€™s direct attack on our system â€” a quiescence that is simply unprecedented for any U.S. president in history. Russia is not our friend. It has acted in a hostile manner. And Trump keeps ignoring it all.

And Manafort could be the key to unraveling the whole mess.Â  See also “Could Paul Manafort Bring Down the Whole Trump Family” by Bob Dreyfuss, from August 2017. 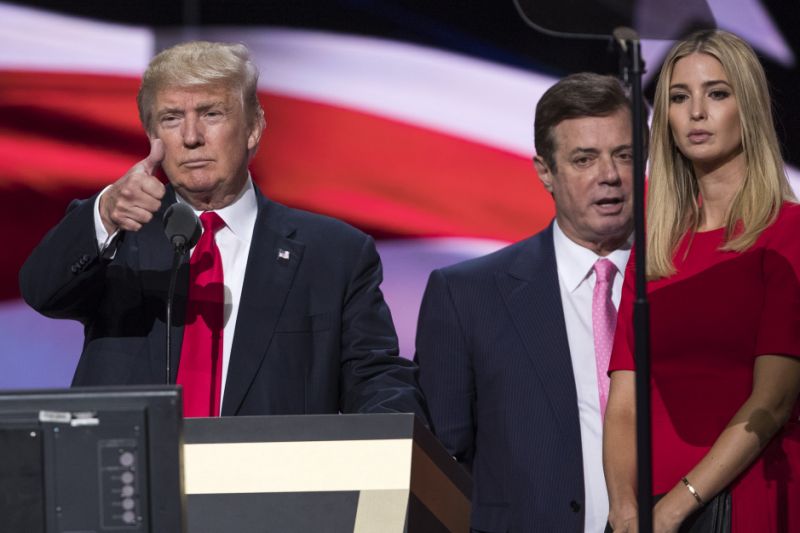 15 thoughts on “Manafort May Be the Key”