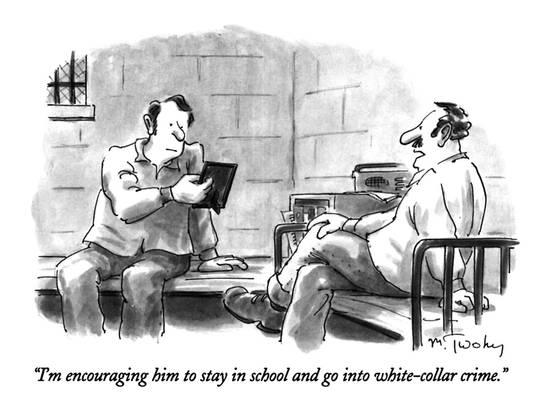 Talking Points Memo has a feature up about Paul Manafort’s financial problems that’s pretty good, although I don’t know that it provides any ground-breaking insight. Yeah, we know Manafort was broke and unwilling to live within his newly restricted means. I mostly want to link to one of the comments:

One of the things that the whole sorry, sordid mess that is Trump-swampia is showing is what the true price is for our collective failure to aggressively prosecute white collar money crimes. Preet Bharara was ask on Bill Maher’s Real Time how Trump could have operated as he did in NYC real estate for so long without triggering any serious criminal investigation. His answer of “my bad” should have been “our bad” since the public has not really cared about such crimes. Until we insist that law enforcement and DA’s pursue these types of criminals with the same zeal that we insist that they pursue a convenience store robber we are going to continue to breed a class of crooks that not only believe that they can game the system to their financial advantage but that they are entitled to do so. #AllCrimesMatter {steps down from soap box}

Bernie Madoff paid for this crimes because he ripped off other rich people. Madoff himself said in a prison interview that the banks and hedge funds he dealt with demonstrated “willful blindness” to what he was up to. They had to know, he said. As long as they were making money, it was okay, I guess.

In 2009, Business Insider published a list of high-profile white-collar criminals who were in jail at the time. It strikes me that some of them, like the dudes who went down with Enron, probably only went down because they failed. Their schemes didn’t pay off fast enough, and it all came crashing down. But before that, especially as they became useful to the political class, they could get away with anything. Until they couldn’t keep up the facade any more, that is.

It’s kind of a sad thing to read this article from 2002 on the lessons of Enron — “Houston, We Have Problem.” It’s sad because the lessons clearly were not learned.

See also “Why Only One Top Banker Went to Jail for the Financial Crisis” from the April 30, 2014 New York Times.

Over the past year, I’ve interviewed Wall Street traders, bank executives, defense lawyers and dozens of current and former prosecutors to understand why the largest man-made economic catastrophe since the Depression resulted in the jailing of a single investment banker — one who happened to be several rungs from the corporate suite at a second-tier financial institution. Many assume that the federal authorities simply lacked the guts to go after powerful Wall Street bankers, but that obscures a far more complicated dynamic. During the past decade, the Justice Department suffered a series of corporate prosecutorial fiascos, which led to critical changes in how it approached white-collar crime. The department began to focus on reaching settlements rather than seeking prison sentences, which over time unintentionally deprived its ranks of the experience needed to win trials against the most formidable law firms. By the time Serageldin committed his crime, Justice Department leadership, as well as prosecutors in integral United States attorney’s offices, were de-emphasizing complicated financial cases — even neglecting clues that suggested that Lehman executives knew more than they were letting on about their bank’s liquidity problem. In the mid-90s, white-collar prosecutions represented an average of 17.6 percent of all federal cases. In the three years ending in 2012, the share was 9.4 percent.

The article points out that the one financial sector professional who did jail time for his role in the crisis, Kareem Serageldin, was more of an enabler than an instigator.

One of the striking things about Trump and his associates is how many of them should have been in jail already.  Trump, certainly. Steve “Foreclosure King” Mnuchin, on principle. Wilbur Ross is dirty as sin. If white-collar crime were taken as seriously as it should be, Trump would never have become president. Instead of going after the real criminals, we scapegoat and punish illegal immigrants. And politicians of both parties have been in on it.

See also, from the Maha Archives:

A Conspiracy So Immense

Save Us from CEOs

9 thoughts on “#AllCrimesMatter, a Rant on White Collar Crime”