He’s screwed up enough this week already he should be grateful for the four-day weekend. Otherwise who knows how much damage he’d have done by Friday, like lose Nebraska in a poker game.

â€œWhatever the scope of the Presidentâ€™s authority, he may not rewrite the immigration laws to impose a condition that Congress has expressly forbidden,â€ wrote the judge, whom President Barack Obama nominated to the federal bench in 2012. Tigar reasoned that the â€œfailure to comply with entry requirements such as arriving at a designated port of entry should bear little, if any, weight in the asylum process.â€

The Trump administration said Tuesday it will continue to press the matter in court.

In Trump’s typical style, he called the 9th Circuit a “disgrace” and the judge an “Obama judge.” Then Chief Justice John Roberts spoke up.

Chief Justice John Roberts is pushing back against President Donald Trump for his description of a judge who ruled against Trumpâ€™s migrant asylum policy as an â€œObama judge.â€

Itâ€™s the first time the Republican-appointed leader of the federal judiciary has offered even a hint of criticism of Trump, who has previously blasted federal judges who ruled against him.

Roberts said Wednesday the U.S. doesnâ€™t have â€œObama judges or Trump judges, Bush judges or Clinton judges.â€ He commented in a statement released by the Supreme Court after a query by The Associated Press.

It also strikes me that if Trump wants to further pursue the matter in court,Â  pissing off the entire federal judiciary isn’t a smooth move.

But there’s more. There’s so much more.

After his cowardly butt kissing of Saudi Arabia yesterday, he did it again today. This is one of his morning tweets:

Oil prices getting lower. Great! Like a big Tax Cut for America and the World. Enjoy! $54, was just $82. Thank you to Saudi Arabia, but letâ€™s go lower!

In this case and many others, Trump is not being â€œfrankâ€ about his real priorities, and he is not putting America first. Heâ€™s putting his own naked self-interest over whatâ€™s good for America, and prioritizing the real-world policy realization of his own prejudices and hatreds over any good-faith, fact-based effort to determine, by any discernible standard, what mightÂ actuallyÂ be in the countryâ€™s interests.

At the very least, he probably assumes lower oil prices make him look good. But there must be more. How much money does he owe the Saudis? Where are these transactions hidden? For that matter, what about the Russians? We need some good money-launderings sleuths looking into this.

The committee is looking to hire money-laundering and forensic accounting experts, three sources familiar with the plans confirm to The Daily Beast. One Democratic committee office said the purpose of the potential new hires is to examine unanswered financial questions about Trump and Russia, but their work could apply broadly across the panelâ€™s intelligence oversight.

President Trump told the White House counsel in the spring that he wanted to order the Justice Department to prosecute two of his political adversaries: his 2016 challenger, Hillary Clinton, and the former F.B.I. director James B. Comey, according to two people familiar with the conversation.

The lawyer, Donald F. McGahn II, rebuffed the president, saying that he had no authority to order a prosecution. Mr. McGahn said that while he could request an investigation, that too could prompt accusations of abuse of power. To underscore his point, Mr. McGahn had White House lawyers write a memo for Mr. Trump warning that if he asked law enforcement to investigate his rivals, he could face a range of consequences, including possible impeachment.

Here’s the thing. If we’re still following the Constitution, as soon as the president* finished asking the question, he was guilty of a high crime and liable to impeachment and removal from office. It doesn’t matter that it never happened, or that McGahn talked him out of it. Given his position, the very suggestion by the president* that the Justice Department behave as his personal Praetorian Guard is an obstruction of justice and an abuse of power. McGahn should’ve walked that conversation over to Robert Mueller’s place as soon as he left the Oval Office. However, he didn’t, and theÂ TimesÂ leaves us with this little land mine deep in the story.

It is unclear whether Mr. Trump read Mr. McGahnâ€™s memo or whether he pursued the prosecutions further.

Meanwhile, there are a growing number of court challenges to Matthew Whitaker’s appointment as acting Aggorney General. Oh, and what about her emails?

So, yeah, the Creature should be thankful tomorrow is a national holiday and people will be watching football and stuffing themselves on turkey and not paying attention to him. 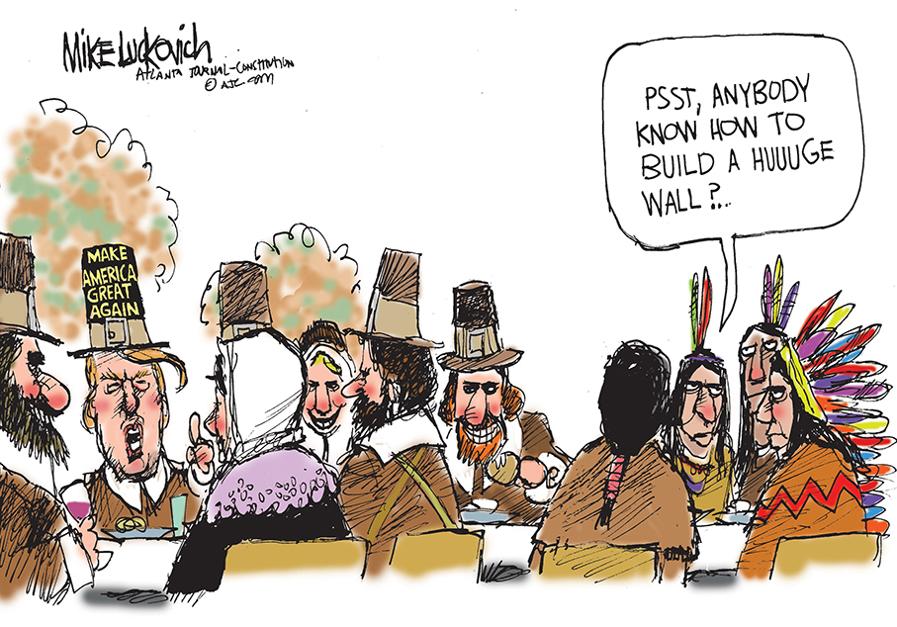 15 thoughts on “Trump Should Be Thankful”