Last week a woman told me that the Green New Deal would outlaw all but electric cars. This week the nutjobs meeting at CPAC are raving that Alexandria Ocasio-Cortez wants to take away their hamburgers.

Sebastian Gorka: “They want to take away your hamburgers. This is what Stalin dreamt about but never achieved.”

Here is the text of the Green New Deal bill that was introduced to Congress. It doesn’t say squat about automobiles or hamburgers. Or beef, cows or even livestock. It does say that reducing gas emissions is an essential goal. This is the section that addresses gas emissions and agriculture —

(A) building resiliency against climate change-related disasters, such as extreme weather, including by leveraging funding and providing investments for community-defined projects and strategies;

(B) repairing and upgrading the infrastructure in the United States, including—

(i) by eliminating pollution and greenhouse gas emissions as much as technologically feasible;

(iii) by reducing the risks posed by climate impacts; and

(iv) by ensuring that any infrastructure bill considered by Congress addresses climate change;

(C) meeting 100 percent of the power demand in the United States through clean, renewable, and zero-emission energy sources, including—

(i) by dramatically expanding and upgrading renewable power sources; and

(G) working collaboratively with farmers and ranchers in the United States to remove pollution and greenhouse gas emissions from the agricultural sector as much as is technologically feasible, including—

(i) by supporting family farming;

(ii) by investing in sustainable farming and land use practices that increase soil health; and

(H) overhauling transportation systems in the United States to remove pollution and greenhouse gas emissions from the transportation sector as much as is technologically feasible, including through investment in—

(i) zero-emission vehicle infrastructure and manufacturing;

From this, the nutjobs at CPAC have concluded that the Left is coming for their hamburgers. See also The Energy 202: How the hamburger became the GOP’s rallying cry against the Green New Deal. 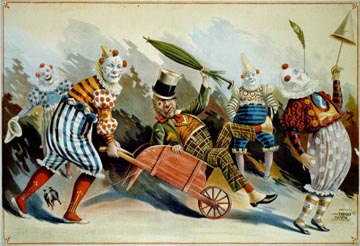 Trump gave a two-hour speech at CPAC today. I don’t know if he mentioned hamburgers. There is no transcript; I take it there was no script.

The rollicking two-hour-plus appearance at the annual Conservative Political Action Conference in Maryland offered the president a brief respite from an otherwise miserable week in which his much-touted summit with North Korean dictator Kim Jong Un ended in failure and his former personal lawyer delivered explosive testimony to Congress.

Trump, basking in the adoration of the crowd, largely glossed over the North Korea summit’s collapse, instead reviving several of his greatest hits, from rehashing the 2016 election to obsessing over the crowd size at his inauguration.

The speech amounted to a boatload of red meat for conservatives, with Trump promising he’ll protect them from undocumented immigrants, socialism and liberal Democrats he claims are dead set on bankrupting the country with proposals like the Green New Deal.

“You know I’m totally off script right now,” Trump said at the beginning of his speech. As his meandering remarks continued, it became clear that his assessment was an understatement.

Appearing on MSNBC with host Alex Witt, GOP strategist Rick Tyler was visibly upset at what he heard from Donald Trump during his speech at CPAC, and even more so by the enthusiastic reception the president was receiving.

“It’s interesting about CPAC,” Tyler began. “It used to be the confab of conservatives who would get together once a year but it’s not CPAC anymore — it hasn’t been since 2016. It’s now Trump-pac and should be TPAC.”

“The people there talk about being pro-tariffs, anti-justice, anti-law enforcement, anti-immigrant, anti-Muslim, pro-Russia, pro-autocrat,” he continued. “It’s unrecognizable what Donald Trump has done to the party and what he’s done to the conservative movement — it’s a shame.”

Asked by host Witt, “What can be done to resurrect the Republican Party as it was — or is that gone?” Tyler said the party is dead.

“Rest in peace,” he lamented. “No, it’s over. The problem is that the Republican Party has no grounding governing philosophy anymore because they’ve signed on to all these things as I just mentioned that were antithetical to the conservative movement.”

“So it’s the Trump party,” he conceded. “When Trump passes on, one way or the other, the party will no longer exist and the Republican party will have — it has no fundamental belief. You have to believe in something, and I don’t know what the Republican Party believes in or what its message is anymore.”

He could be right.

19 thoughts on “CPAC, Cows, and the Green New Deal”