Lots of smart people are going through the Mueller Report as I keyboard. It may be a couple of days before we have a comprehensive picture, but much that is floating to the surface to far is pretty damn disturbing and makes AG Bill Barr out to be a damn liar.

The shameful “press conference” this morning amounted to a defense attorney’s summation. Barr was spinning to sway the jury to find his client not guilty. I listened to some of it this morning and wondered if someone in the White House — Steven Miller maybe — had a hand in writing it; it was obviously composed for Trump’s approval. In the remarks as delivered ( as opposed to the transcript as written for delivery) Barr seemed to repeat “no collusion, no collusion, no collusion” umpteen times. Odd, considering that “collusion” is not a legal term but is a word that Trump has latched on to and keeps repeating.

Barr’s bizarre statements will be all that Trump’s supporters need to hear to believe the controversy is over. But the report itself is much murkier. According to the report, there were a lot of contacts between the Trump campaign and Russian government officials. The campaign also was in touch with Wikileaks about their document dumps. Further, Trump and his campaign knew that Russia was taking steps to help the campaign. Why was this not conspiracy?

From what I can tell so far, the primary reason no criminal conspiracy (in some opinions) was committed is that Trump and his people had nothing to do with the hacking of the DNC and other servers. Coordinating with Wikileaks was not criminal, because Wikileaks committed no crime by publishing materials hacked by somebody else. In other words, Wikileaks acted as a buffer. There was collusion between the Trump campaign and Russia, but technically this collusion fell short of a crime. Seems lame.

As far as obstruction is concerned — yeah, Trump is guilty as sin, even if he’s never indicted. Paul Waldman and Greg Sargent:

On Thursday morning, Barr tried to explain why he declined to bring obstruction-of-justice charges against Trump, even though special counsel Robert S. Mueller III did not exonerate him of it. Barr appealed to us to consider how victimized Trump felt, when considering the extensive efforts to derail the investigation detailed in the report, noting Trump “was frustrated and angered by his sincere belief that the investigation was undermining his presidency, propelled by his political opponents and fueled by illegal leaks.”

So Trump sincerely believed he was justified in obstructing justice because of his feelings, and that makes it okay?

But the only reason Trump wasn’t more effective at obstructing justice is that many of his underlings wouldn’t carry out his orders. This is from the Mueller report:

Our investigation found multiple acts by the President that were capable of exerting undue influence over law enforcement investigations, including the Russian-interference and obstruction investigations. The incidents were often carried out through one-on-one meetings in which the President sought to use his official power outside of usual channels. These actions ranged from efforts to remove the Special Counsel and to reverse the effect of the Attorney General’s recusal; to the attempted use of official power to limit the scope of the investigation; to direct and indirect contacts with witnesses with the potential to influence their testimony. […]

The President’s efforts to influence the investigation were mostly unsuccessful, but that is largely because the persons who surrounded the President declined to carry out orders or accede to his requests.

The reason I’m saying this shitstorm is just getting started is that the fight is going to shift into new and tricker territory. Democrats are going to continue to pursue Trump’s wrongdoing, while Trump supporters will insist the Dems are beating a dead horse and that the issues investigated by Mueller have been resolved. My sense of things is that this isn’t over by a long shot, and it’s all going to get even messier. 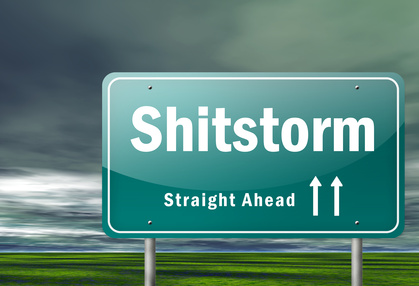 8 thoughts on “This Shitstorm Is Just Getting Started”